The Mueller Report and Congressional Investigations

The Mueller Report contained several disturbing conclusions about Russian attacks on the U.S. election system and President Trump’s misconduct. Congress is now scrutinizing this report. These investigations are well-grounded in Congress’s Article I powers and the jurisdictional directives of the House Rules.

Special Counsel Mueller testified July 24 before two House committees, repeatedly reiterating his report’s conclusion that the president is not exonerated from wrongdoing.  Listen to Thursday’s briefing call discussing the implications of his testimony.

“On Wednesday, in sworn congressional testimony, Special Counsel Robert Mueller publicly confirmed 100 percent of the devastating findings of his report, and made clear that his inquiry does not exonerate the president. Within 24 hours, though, the conversation has coalesced around a few superficial observations: Mr. Mueller underperformed and the Republicans overplayed their hand, but in the end, this is just about the end of the road for investigations around President Trump, let alone talk of impeachment.

Not so fast. Cooler heads in Congress and the news media are pressing forward on the material presented by Mr. Mueller’s team, especially the possibility that the president attempted to obstruct justice. But there’s something else to keep in mind: There’s a lot more to the case against Mr. Trump and his associates than what came up in Wednesday’s hearings.” Read the full piece.

“During Wednesday’s hearing before the House Judiciary and Intelligence Committees, the contrast between Robert Mueller and members of Congress could not have been more stark. Mueller, the special counsel and reluctant witness, showed great restraint in his brief answers about his investigation into Russian interference in the 2016 election and links to the campaign of Donald Trump. Members of Congress read with gusto details from Mueller’s report about the investigation or hurled conspiracy theories at him, only to have him bat them away as outside his ‘purview’. Their differences likely come from the very different jobs they perform.” Read the full piece. 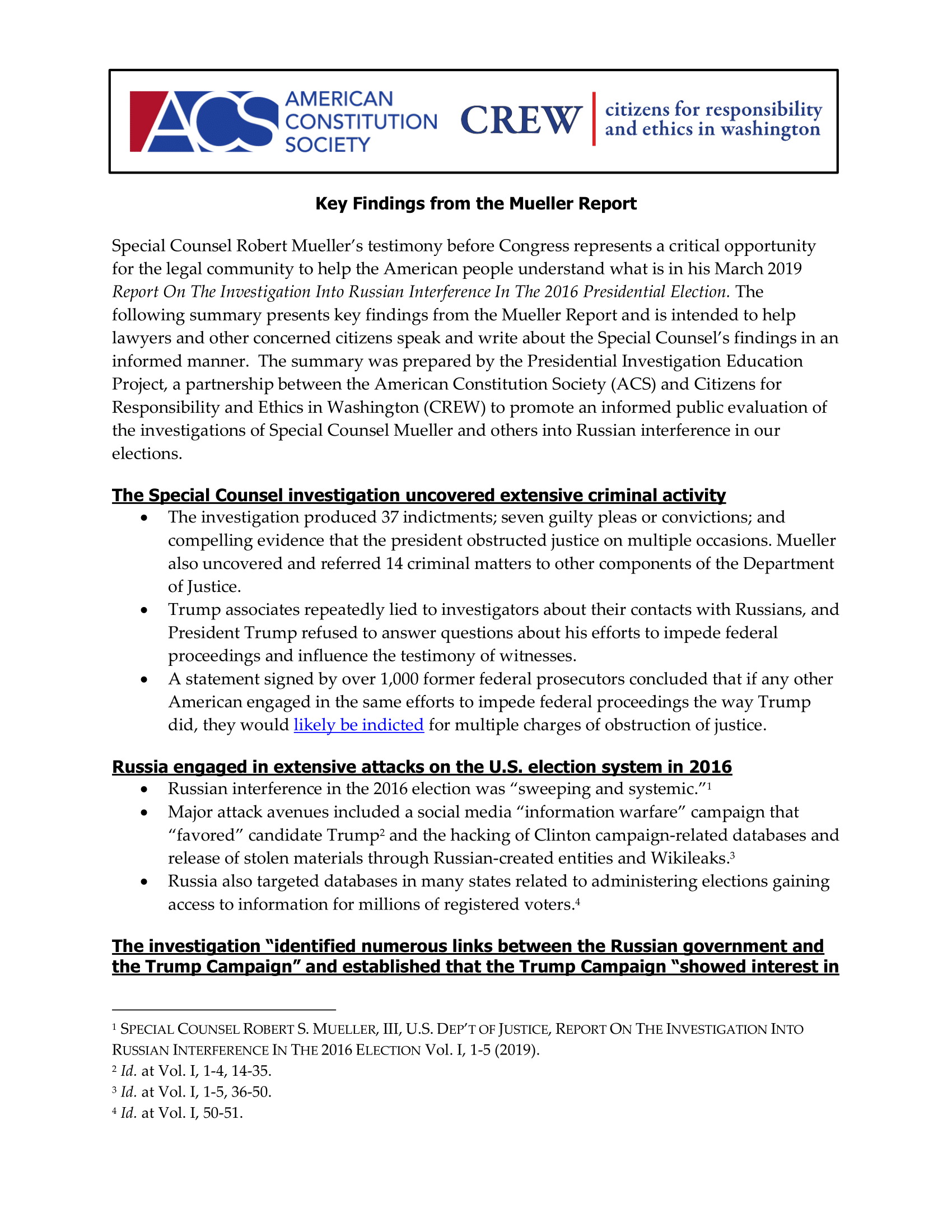 (2) Both before and after public reports of the Russian attacks, the Trump campaign had multiple contacts with Russian nationals and did not report these interactions to U.S. authorities

(3) There is substantial evidence that President Donald Trump repeatedly attempted to thwart the Department of Justice’s efforts to investigate the Russian attacks, including through his unheeded requests to the White House Counsel to fire the Special Counsel and create a false paper trail and make public misrepresentations regarding this incident

More resources on the Mueller Report

ACS Resources: The Mueller Investigation and the President’s Pardon Power

Peter Shane on ACS Expert Forum: The Fatal Flaw in the Argument for McGahn's Testimonial Immunity

Victoria Nourse on ACS Expert Forum: Oversight Is a Constitutional Necessity, Not a Luxury

2,000 lawyers signed an open letter urging the protection of the special counsel's investigation