Article V of the U.S. Constitution

Article V of the U.S. Constitution provides two avenues for amending the Constitution. One of those avenues – an Article V Convention – has never before been used, in part because it could put the entire Constitution on the chopping block. Factions of the far Right, however, are now actively working to orchestrate such a convention, with the goal of radically rewriting the U.S. Constitution to achieve partisan outcomes. If the outcomes of a mock convention held by factions of the Right in 2016 are any indication, an Article V Convention could see amendments aimed at  disassembling modern government and the century-old New Deal consensus, returning the country to the troubling, splintered times when the federal government could do little to provide for national welfare or defense. This could include amendments to repeal the federal income tax, to require  onerous supermajorities akin to the filibuster to raise other taxes, and to enable state legislatures to nullify federal laws and regulations. Given current political dynamics, it’s easy to also imagine amendments to ban abortion and enshrine extreme interpretations of the 2nd Amendment. ACS is actively educating the public about the dangers of this radical effort and the potential for it to send this country into a constitutional crisis even more dire than January 6th.

The Constitution In Jeopardy: An Evening with Russ Feingold and Peter Prindiville (Winnetka)

Conversation with ACS President Russ Feingold on “The Constitution in Jeopardy: An Unprecedented Effort to Rewrite Our Fundamental Law and What We Can Do about It”

The Constitution in Jeopardy: An Unprecedented Effort to Rewrite Our Fundamental Law and What We Can Do About It
by Russ Feingold and Peter Prindiville

Over the last two decades, a fringe plan to call a convention under the Constitution’s amendment mechanism—the nation’s first ever—has inched through statehouses. Delegates, like those in Philadelphia two centuries ago, would exercise nearly unlimited authority to draft changes to our fundamental law, potentially altering anything from voting and free speech rights to regulatory and foreign policy powers. Such a watershed moment would present great danger, and for some, great power.

In this important book, Feingold and Prindiville distill extensive legal and historical research and examine the grave risks inherent in this effort. But they also consider the role of constitutional amendment in modern life. Though many focus solely on judicial and electoral avenues for change, such an approach is at odds with a cornerstone ideal of the Founding: that the People make constitutional law, directly. In an era defined by faction and rejection of long-held norms, The Constitution in Jeopardy examines the nature of constitutional change and asks urgent questions about what American democracy is, and should be. 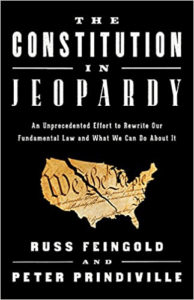 Episode 68: The Constitution Is In Jeopardy