Student Chapter of the Week | ACS

Student Chapter of the Week 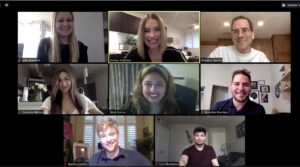 The University of Nevada Las Vegas William S. Boyd School of Law ACS Student Chapter is grateful to be recognized by ACS National as Student Chapter of the Week! UNLV looks forward to a great year and the creation of consistent avenues to find new, innovative ways to engage members and the law school community in these unique times.

The UNLV chapter kicked off the semester by hosting the ACS Virtual Western Regional Convening in conjunction with the ACS Student Chapters from the University of Denver Sturm College of Law and Arizona State Sandra Day O’Connor College of Law. At the Convening, the UNLV chapter’s panel focused on cannabis legalization and how states can create laws and policies with a restorative justice angle in mind. The panel featured state leaders who were key players in pushing for cannabis legalization in Nevada and who continue to identify deficiencies in the laws in order to ensure that the communities most impacted by criminalization are being repaired.

Additionally, the Western Regional Convening featured a panel that combined experts from the chapters’ home states of Nevada, Colorado, and Arizona to discuss election integrity in the era of COVID-19. The UNLV chapter’s featured panelist was a state senator who discussed all the ins and outs of Nevada’s elections amidst the pandemic and how voters can ensure that their voting plan is successful—and counted.

This semester, the UNLV chapter is turning its focus to election integrity. The Chapter recently hosted a Voter Suppression and Advocacy Training event with Nevada’s All Voting is Local. The training covered the history of voter suppression, what it looks like today, and advocacy tactics to ensure greater access to voting in the time of COVID-19 and racial injustice. The Chapter recently explored more advocacy options through a training with the Nevada Voter Protection Department. As election day nears, the UNLV chapter continues to work to organize early voting outings, volunteer opportunities, and create other election integrity events aimed at increasing ones interest and raising awareness to the importance of voting efforts.

The Chapter would like to thank its Faculty Advisor and ACS National Board of Directors member, Professor Ruben Garcia, for his support. 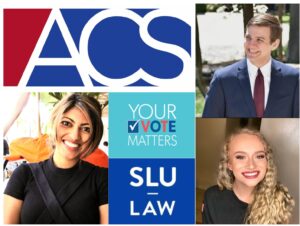 The ACS St. Louis University School of Law Student Chapter is grateful to be recognized by ACS National as Student Chapter of the Week and to contribute to the ongoing conversation regarding structural racism and the fate of our democracy.

Following the death of George Floyd, the St. Louis Law ACS Chapter partnered with the St. Louis Law Black Law Students Association (BLSA) to construct a five-part speaker series concerning the fundamental precepts of structural inequality in St. Louis and, by extension, the country at-large. This series examines tremendous obstacles and disadvantages faced by People of Color in areas such as education, wealth, property, and the health system. The design of the current system leads to disproportionate rates of incarceration and homelessness among populations of color, particularly Black and Brown communities. If not properly remedied, this cycle will only continue.

The series titled Strengthen Your Understanding: Honest Perspectives, focused weekly on a different social institution and the structural impediments therein which were unambiguously designed to forestall the social and economic progress of people of color generally and the African American population specifically. The ACS St. Louis student chapter was fortunate to host both preeminent scholars and legal practitioners who spoke on relevant topics.

The intent of these discussions were to create a venue for experts to provide depth on a specific topic used as fodder for a moderated discussion with the speakers and participants. The ACS chapter’s sincere hope was that these difficult but long-overdue conversations would provide greater clarity and understanding concerning the enduring barriers shrouding previously opaque social institutions.

The ACS St. Louis Student Chapter truly believes in a progressive jurisprudence venerating the Constitution as a remarkable document capable of far-reaching application. They intend to do more programming of this nature to reflect an evolving national zeitgeist finally demanding change.

The ACS St. Louis Executive Board includes Chandni Challa (President), Mikalya Butler (Vice President), and Alex Foxberry (Secretary-Treasurer) The ACS St. Louis Student Chapter thanks Riana Brooks (President) and the entire BLSA team for partnering on this timely and important series. Additionally, it would like to thank Dean Jon Baris, Dean Shannon Morse, Professor Brendan Roediger, and ACS Faculty Advisor Professor Marcia McCormick, without whom this series would not have been possible. Finally, the Chapter would like to thank the St. Louis Law School Dean William P. Johnson for his weekly attendance, which was truly meaningful as it showcased SLU Law’s commitment to equal opportunity and justice for all. 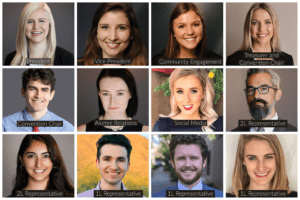 ASU’s ACS Chapter is honored to be recognized as the ACS Student Chapter of the Week.

The Chapter has planned nearly twenty events for the fall semester. ASU participated in the Western Regional Convening and assisted in planning the panels on Extreme Risk Protective Orders and elections. The Chapter has also created a Racism in the Law Event Series, creating space for professors and students to discuss ways in which racism has been written into and perpetuated by the laws in this country. Some topics explored in the event series include the federal income tax code, reproductive rights, and prosecutor accountability in police brutality cases. Additionally, ASU is also excited to host Judge Bacharach of the Tenth Circuit to discuss the art and science of legal writing. On October 5th, the last day to register to vote in Arizona, the Chapter is hosting an event with All Voting is Local to teach students about the history of voter suppression in Arizona and steps to ensure a fair and free election this November.

In addition to programming, ASU has taken measures to keep members connected while navigating law school during COVID-19. The Chapter created a mentorship program to pair new students with 2Ls and 3Ls that have similar academic and recreational interests and planned social hours to allow students to network and make friends. The Chapter has also created an outline bank to assist its members succeed in their classes. The ASU Chapter is also partnering with the ACS Arizona Lawyer Chapter to create a mentorship program that matches students with attorneys working in their field of interest.

The ASU Chapter would like to thank its Faculty Advisor Joshua Sellers and ACS National for the continued support and encouragement while navigating virtual programming this year. 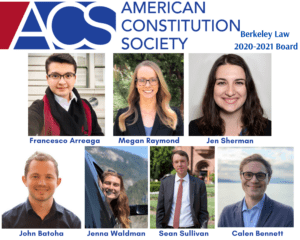 The ACS chapter at Berkeley Law is thrilled to be recognized as the ACS Student Chapter of the Week! This semester, the Berkeley Law Chapter’s programming will focus on a multifaceted Social, Racial, and Economic Justice Book Club/Speaker Series. The Chapter hopes that this series of events will encourage law students to utilize their legal training in the future to advance social, racial, and economic justice.

The ACS Berkeley Law Chapter kicked off the year with its annual Supreme Court Roundup, which was co-hosted by the Berkeley Law Federalist Society chapter At this event, both groups reflected on the most recent Supreme Court term and discussed implications for the future. The Chapter celebrated Constitution Day with Dr. David Carrillo, Executive Director of the California Constitution Center, who focused on the values and differences between the state and federal constitutions and the importance of advocacy at both levels.

The Berkeley Law Chapter has thirteen more events planned this semester on subjects including: reparations; the critical role judges have in advancing justice; family separations at the border and children’s civil rights; the election and redistricting; habeas corpus; the separation of church and state; consumer protection; reproductive justice; and antitrust law. These events will each feature incredible and diverse leading voices in their fields. You can check out the ACS at Berkeley Law Chapter’s full list of speakers and events here.

Berkeley Law ACS Co-Presidents Francesco Arreaga and Megan Raymond wish to thank their fellow board members Jen Sherman, Calen Bennett, Sean Sullivan, Jenna Waldman, and John Batoha,  as well as their Berkeley Law ACS Faculty Advisor, Professor Andrew Bradt, for their contributions in making the Chapter the success it is today. Please follow Berkeley Law ACS on Facebook to keep up with events. 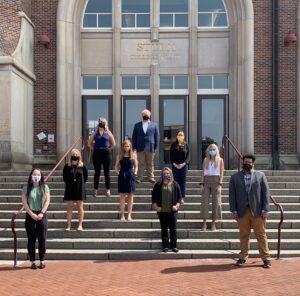 The University of Denver Sturm College of Law

The University of Denver Sturm College of Law ACS Student Chapter has been busy planning topical and interesting events for its students and lawyers! In early September, the chapter partnered with the University of Arizona Sandra Day O'Connor College of Law and University of Nevada Las Vegas ACS student chapters to host the 2020 ACS Virtual Western Regional Convening. This two-day event brought together students and lawyers from all across the western states to network and discuss progressive legal issues. With events covering topics such as red flag gun laws, cannabis legalization, police reform, and voting rights, this convening truly reignited the spirits of both students and lawyers amidst this trying time.

In addition to the Western Regional Convening, the chapter is hosting a series of lunch talks called “Reforming the Republic.” The slated topics include the impact of protests, voting reform and transition of power, healthcare inequality, and education reform. Additionally, the chapter is planning different ways to engage 1L students, including hosting virtual happy hours and electing students to serve as 1L board members! The Chapter would like to thank its Faculty Advisors, Professors Alan Chen and Alexi Freeman, for their support and guidance.