The American Constitution Society is the nation’s leading progressive legal organization, with approximately 200 student and lawyer chapters in almost every state and law school. Through a diverse nationwide network of progressive lawyers, law students, judges, scholars and many others, we work to uphold the Constitution in the 21st Century by ensuring that law is a force for protecting our democracy and the public interest and for improving people’s lives. Our chapters hold over 1,400 public programs across the country each year, generating “intellectual capital” for ready use by progressive allies and shaping debates on key legal and public policy issues. A list of all student chapters is available here.

ACS also works to cultivate the next generation of progressive leaders. We use our extensive national network to assist our members with career development, mentorship, and job assistance. Our members get access to job banks, special conference calls, and the opportunity to network with progressive leaders throughout the country.

Fill out our Summer Update Form to let us know what you will be doing in Summer 2021!

Not yet an ACS student member? Join our network today.

Information on our current volunteer projects can be found here.

If you need ideas for an event, try checking out one of our program guides.

Student Chapter of the Week

Our student chapters work hard to bring progressive programming on timely legal topics to campuses across the country. The ACS Chapters Team recognizes a different student chapter for its efforts each week during the academic year. Read about our previous Chapters of the Week here.

The UC Hastings College of the Law 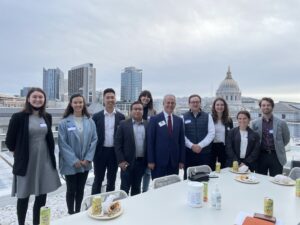 The UC Hastings College of the Law ACS Student Chapter is honored to be recognized as ACS National’s Student Chapter of the Week. The Chapter has had an eventful fall semester.

In mid-September, the Chapter hosted a successful speaker panel titled “Is it the End for a Right to Abortion?” The event was in response to Texas’s law banning most abortions after SCOTUS refused to enjoin it. Prominent professors in the field of constitutional law from UC Hastings and UC Davis School of Law discussed why the Texas law is considerably difficult to challenge and what other states are doing to limit the right to abortion that exists now. One of the speakers at the event, Matthew Coles, is a faculty advisor for the UC Hastings ACS Chapter. In October, the Chapter hosted another hybrid event in collaboration with Everytown Law. Mark Frassetto, the Deputy Director of Second Amendment History and Scholarship at Everytown, gave a presentation to students about the history of the amendment and how it intersects with gun violence prevention efforts. The Chapter also welcomed ACS President, Russ Feingold, to the UC Hastings campus for a meet and greet event with other ACS Chapters in the Bay Area. For its final event of the semester, the UC Hastings Chapter collaborated with the ACS Chapter at Boston College to host Scott MacFarlane, an investigative reporter with NBC4 Washington, for a talk on the January 6th insurrection.

The Chapter would like to thank its faculty advisor Professor Matthew Coles for his continued support and mentorship.

ACS wouldn’t be ACS without its amazing network of law students that inspire us every day. Each week of the academic year, ACS features a blurb from a student chapter member about their work with ACS, what led them to law school, what motivates them, and more. 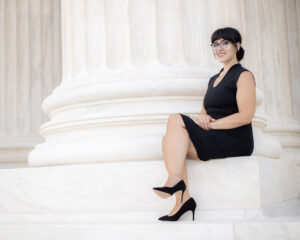 Being raised in the heart of Appalachia, my view of the world was closed off and narrow; molded by generations of undereducation and lack of diversity. At 18, I left Appalachia for the first time and moved to Tucson, Arizona for college, the place I consider home to this day. There, my understanding of the world was challenged and I began creating my own ideals of the world around me. I strayed from the safety of my closed universe and surrounded myself in hardships and injustices. The more I learned, the more my view of my future changed. Eventually, I was in my advisor’s office changing my major. I added time to my schooling, and debt to my name, but I knew where I needed to be: fighting every injustice I came across. Focusing on domestic human rights and civil rights gave me the broadest scope to help the most people and I have not looked back since.

Life didn’t go quite as expected. I finished my undergrad, completed my graduate degree, and soon found myself as a single mother of three after fleeing an abusive relationship. At one point I was homeless and working four jobs while saving every penny I could to take the LSAT.

Now, I’m here—a 2L evening student in one of the top evening programs in the country. My days start at 4:30 a.m. and end at 11 p.m. As a first-generation student, I had so much to learn. In law school, I looked for student groups that shared my passion for justice and viewed themselves as the people who would stop at nothing less. I found ACS and the rest is history.

This year, I’m the President of the American University Washington College of Law’s ACS Chapter. It has been slow-moving this fall due to my own mental health struggles, but my board and I are currently working to make up for it and more in the Spring. I was just welcomed into the Truth, Racial Healing, and Transformation ACS Student Task Force and together we hope to bring a voice to those so often silenced among us in our communities. I am working closely with my colleagues and professors to bring a Truth Commission to AUWCL to ensure everyone has a chance to speak out against injustices in a space where they can feel safe and heard so we can begin to ensure no one ever feels the way they have felt again.

With the camaraderie I have experienced thus far through my involvement with ACS, I know the future is no longer bleak. I know these injustices most accept as “just the way it is” will soon be only taught in history books. For that, I am grateful for stumbling upon ACS and the amazing people I have met so far.

Read about past Students of ACS here.

If you would like to be featured as a Student of ACS, complete the submission form here.

ACS has dedicated its 20th Anniversary year to race and the law, and to reckoning with the founding failures of our Constitution. As the country’s foremost progressive legal organization, ACS is focused specifically on how our laws and legal systems have been used to sustain and legitimize racial oppression and on supporting transformative legal change. Moving forward, ACS will be hosting programs, producing scholarships, and engaging with partners to advance truth, racial healing, and transformation.

This work – truth, racial healing, and transformation – involves all of us. ACS invites its student and lawyer chapters, and all ACS members to join in reckoning with our laws and institutions, and in reimagining a legal system that is grounded in racial equality and justice. Learn more here and reach out to us at campus@acslaw.org to get involved.

This year’s 2021 ACS National Convention took place virtually from June 7 to June 11. This year’s convention focused on the Constitution’s “founding failures” when it comes to race and equality in this country, and reckoning with our past to create a more just future. Thank you to all who attended and made this event such a success!

To view the recordings of this year’s 2021 programming click here.

This year’s virtual graduation took place on May 21, 2021 and featured remarks from Jarrett Adams, Kristine Cruz, Hon. Luis Felipe Restrepo, and Cecile Richards. Thank you to all who attended and made this event such a success!

Chapter of the Year Award: The University of Chicago Law School

The 2021 ACS Student Convention was held virtually from March 25 to March 27 and brought together over 500 people! Thank you to all who attended and made this event such a success.

Over the last four years, the U.S. Senate has engaged in an unprecedented power grab, placing the Court and our democracy in a new and perilous state. But the ACS lawyers and law students are not going to sit quietly by as the Right takes away their future. We must, and will, respond swiftly and forcefully to make clear that this fantasy of minority rule enforced by captured courts is just that. Courts that are in need of reform will be reformed. See ACS President Russ Feingold’s statement here.