What To Expect When You're Expecting Impeachment 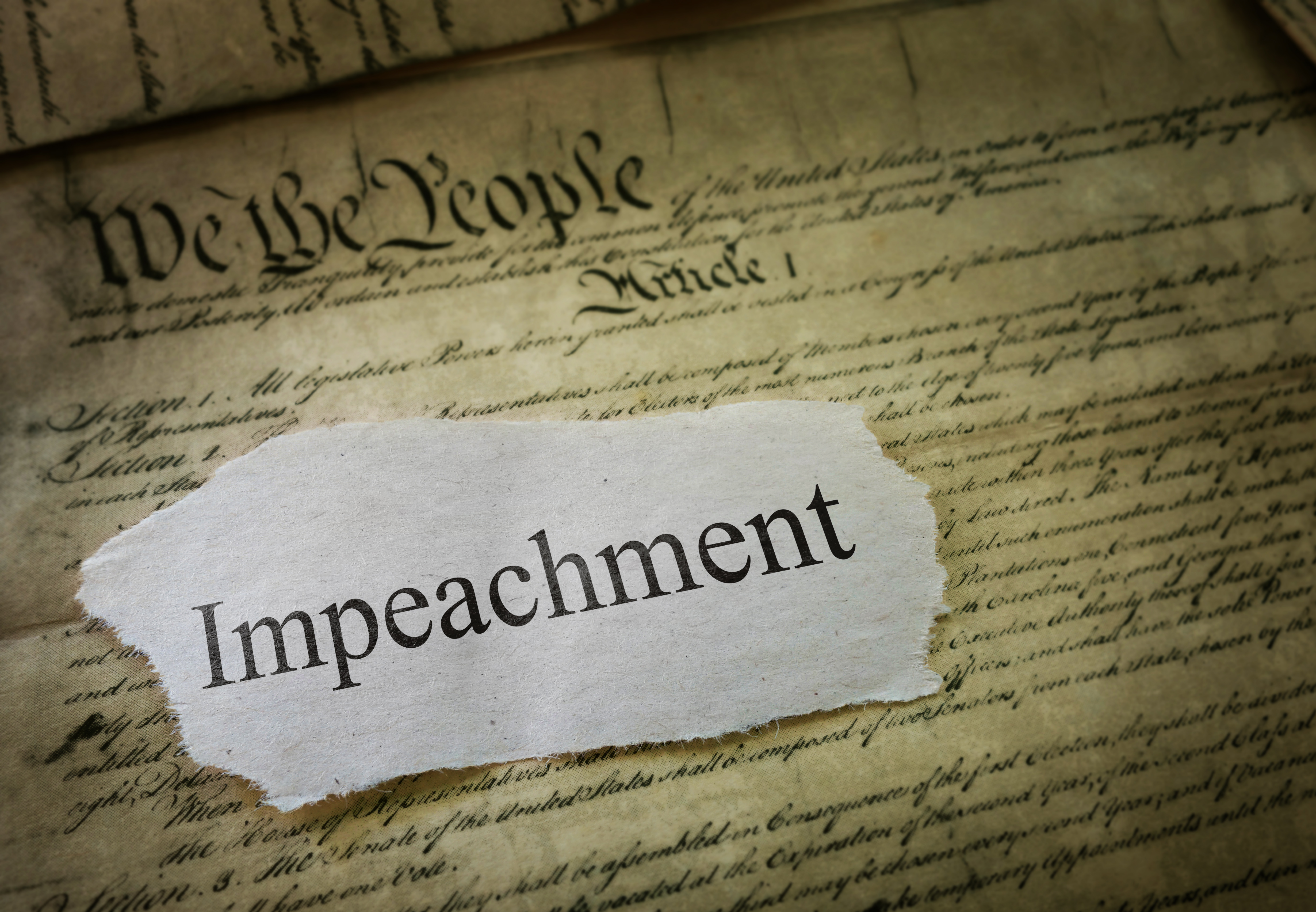 Note: This blog was originally published on 9/27/2019: House Speaker Nancy Pelosi announced on Tuesday the commencement of an impeachment inquiry into President Donald Trump.  The inquiry, when announced, was evidently, meant to be an umbrella that covers all the various investigations into presidential improprieties.  Subsequent posts will delve into the specifics of those investigations and whether they provide sufficient grounds for impeachment.  In this post, I will outline the mechanics of impeachment.

The operative provision – the one that sets forth the grounds for impeachment – is found in Article II:

The President, Vice President, and all civil officers of the United States, shall be removed from office on impeachment for, and conviction of, treason, bribery and other high crimes and misdemeanors.

The Constitution divides the impeachment power between the House and the Senate, providing that “[t]he House of Representatives … shall have the sole power of impeachment,” while granting the Senate “the sole power to try all impeachments.”  This means that the House’s decision to impeach a civil officer is analogous to an indictment, which is then forwarded to the Senate for adjudication and disposition.

The Constitution says virtually nothing about the procedures the House and Senate are to employ in carrying out their respective impeachment roles.  Indeed, the Constitution is completely silent regarding the procedures in the House.  This means the general rule that the House of Representatives operates by majority vote applies to its power to impeach.  With respect to the Senate, the Constitution provides that where the President has been impeached, the Chief Justice shall preside over the trial and that conviction (of the President or any other civil officer) requires a vote of two-thirds of the members present.  The requirement of a two-thirds vote to convict has a pervasive influence on impeachments.  As a practical matter, it requires that impeachment must be a bipartisan undertaking, otherwise any impeachment by the House is an empty, symbolic exercise.   Moreover, the requirement of a two-thirds Senate vote operates to prevent impeachment from being used as a weapon to make the executive or judicial branch subordinate to Congress.

II. Procedure in the House of Representatives

A. Developing the Record

The Rules of the House of Representatives, like the Constitution itself, are largely silent on impeachment.  For example, there is no rule that expressly assigns jurisdiction for impeachments to a particular committee.  House precedents establish that impeachment resolutions are to be referred to the Judiciary Committee but leave open the possibility of assigning authority to investigate to other committees.  As a result, there is a great deal of discretion in the Speaker to assign investigation of presidential wrongdoing as she sees fit.  Impeachment investigations, in practice, have typically been assigned to the Judiciary Committee.  The investigations of both Richard Nixon and Bill Clinton were assigned to the Judiciary Committee.  Nonetheless. Speaker Pelosi’s decision to assign investigation of wrongdoing by President Trump in connection with Ukraine to the House Intelligence Committee is perfectly appropriate under the rules of the House.

The formal vehicle for accusing the President of having committed a high crime or misdemeanor is an article of impeachment.  The practice of the House has been for the Judiciary Committee to draft and vote on articles of impeachment.  Those articles or accusations that the Committee approves are then sent to the floor for consideration of the full House of Representatives.  It was the floor debates over the articles of impeachment proffered against Bill Clinton where the House Republicans had the opportunity to make their case to the public that he should be impeached.  It was the conduct of these debates that seems to have convinced the public that the impeachment effort was partisan.

Once the House adopts articles of impeachment, it selects a group of managers to act as prosecutors in the impeachment trial to be held in the Senate.  The selection of House managers can happen in several ways, including direct election by the full House, adoption of a resolution naming the managers, or a resolution authorizing the Speaker to name them.  Under any method, the Speaker and the leadership effectively hold the power to designate the slate of managers.  There is longstanding concern with this method of prosecuting impeachments as the lawyering skills of House members are often not on par with the skills of the professional counsel retained to defend the subject of the impeachment.  The House managers could retain outside counsel to make oral arguments and conduct the examination of witnesses during the Senate’s impeachment trial, though House members are predictably reluctant to forego such a prime opportunity to appear in the national limelight.

The Nixon impeachment did not reach this stage because the bipartisan consensus in favor of removing him from office was so overwhelming that he resigned.  In the case of President Clinton, the House appointed 13 Republican members of the Judiciary Committee.  Their advocacy did nothing to dispel the broadly held sense that the impeachment of President Clinton was, in fact, a partisan affair.

III. Trial in the Senate

A. Initiating the Trial

The Constitution clearly contemplates that the Senate will in fact hold a trial upon Articles of Impeachment duly adopted by the House of Representatives.  The Constitution does not, however, by its express terms command the Senate to hold a trial.  Given the refusal of the Majority Leader to allow the Senate to consider President Obama’s nomination of Merrick Garland for the Supreme Court, one might anticipate that Senator McConnell would similarly refuse to hold an impeachment trial were the House to impeach President Trump (especially since the Constitution just as clearly contemplates that the Senate will consider a Supreme Court nominee and vote to confirm or reject the nomination).

The Senate has adopted Rules of Impeachment that do appear to require the Senate to hold a trial.  Rule III commands:

Upon such articles being presented to the Senate, the Senate shall, at 1 o’clock afternoon of the day (Sunday excepted) following such presentation, or sooner if ordered by the Senate, proceed to the consideration of such articles and shall continue in session from day to day (Sundays excepted) after the trial shall commence (unless otherwise ordered by the Senate) until final judgment shall be rendered, and so much longer as may, in its judgment, be needful.

Thus, the Senate’s consideration is automatically initiated by the House managers introducing the Articles of Impeachment to the Senate and appearing at the bar of the Senate.  See Rules I, II.

The Senate does not follow its normal rules of order during an impeachment trial.  Senators may not engage in colloquy, question witnesses, or otherwise participate in the presentation of the case.  The Senate Rules for Impeachment provide, in fulfillment of the constitutional requirement, that the Chief Justice shall preside over the trial when the President has been impeached.  See Rule IV.  The rules provide for pre-trial orders to be issued by the presiding officer, and for process to compel the witnesses to appear and give evidence.  During the proceedings, the Senators are required to remain silent and to function as a jury.  The trial itself functions largely in the manner of any ordinary trial, with lawyers on both sides making opening statements, presenting evidence, questioning witnesses, making motions and objections (ruled on by the Chief Justice), and making closing statements.  The Senate rules provide that the function of receiving evidence may be committed to a committee.  This process has been used for the impeachment trial of District Court Judges.  It has never been used for the trial of a President, and it is difficult to imagine the Senate seriously contemplating delegating this function to a committee.  After both sides make their closing statements, the question of conviction is presented to the Senate.  At that point, the Senate meets in closed session to deliberate.  When the deliberation is concluded, the Presiding officer presents the question, calls the name of each senator, and each senator must respond by saying either “guilty” or “not guilty”.  No speech is permitted and no other response is in order.  When called upon to vote on whether to convict President Clinton, Senator Arlen Specter attempted to vote “not proven” but this response was ruled out of order.

If any civil officer, including the President, is convicted of having committed a high crime or misdemeanor, the Constitution imposes a mandatory punishment: removal from office.  Were the House to impeach and the Senate to convict President Trump, he would be removed from office as President.  But he would be allowed to run for the presidency again.  In fact, Judge Alcee Hastings was elected to Congress after having been impeached and convicted on corruption charges.  He is currently serving his thirteenth term as a Representative from Florida.

The Constitution, however, allows the Senate to impose as an additional punishment “disqualification to hold and enjoy any office of honor, trust, or profit under the United States.”  The Senate may approve this punishment by a simple majority vote, but it has imposed this disqualification only twice (against Judge West Humphreys in 1862 and Judge Robert Archbald in 1913) in the nation’s history.

Kinkopf served as Counselor to Sen. Joseph Biden for the Impeachment Trial of President Clinton.