Trump's New Immigration Ban Is Potentially More Dangerous, and More Legally Vulnerable, Than You Might Think 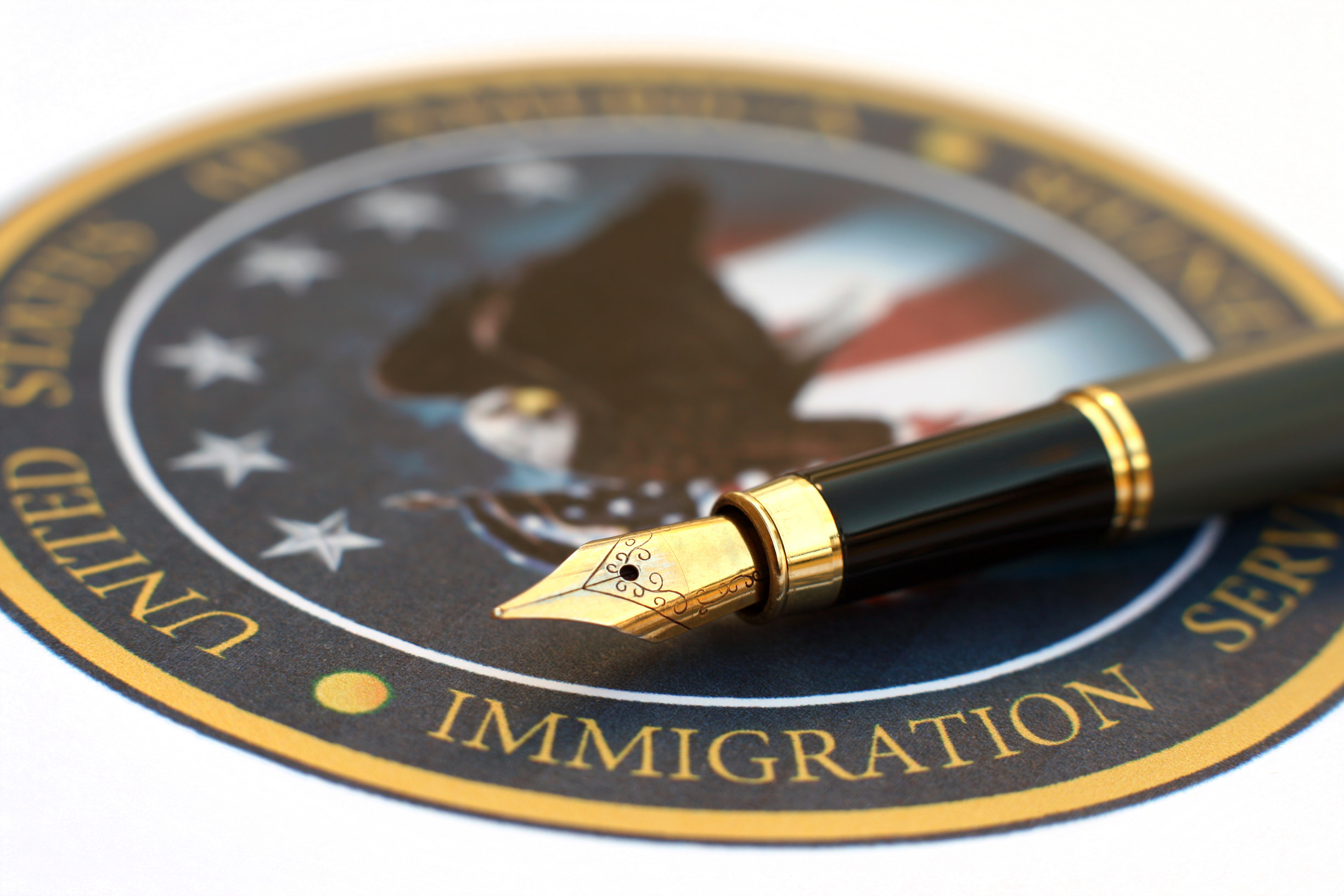 When faced with criticism for his responses to the coronavirus pandemic, President Trump has reacted almost reflexively by touting his administration’s immigration restrictions as the centerpiece of its efforts. But long before the pandemic, Trump had amassed a considerable record of manufacturing “bogus emergencies” to pursue longer-term immigration policy goals. His latest immigration order might be his most brazenly disingenuous, using a pretextual response to a genuine crisis to hack away at basic features of the immigration system that Congress established decades ago, and to impose his own policy preferences in their place by executive decree.

Last week, after officials scrambled to finalize the details, Trump signed a sweeping proclamation making good on his pledge on Twitter two days earlier to “temporarily suspend immigration into the United States” because of the pandemic. The order bans most noncitizens from entering the United States to become permanent residents—initially for sixty days, but potentially for longer.

In its stated rationale, its potential consequences, and its probable longevity, the new directive is different in kind from Trump’s other immigration-related measures during the outbreak. Those differences make it particularly dangerous—but also make it vulnerable to legal challenges.

Trump’s decree strikes at the heart of the immigration system

Trump’s new order does not, to be sure, ban every last noncitizen from entering the United States. However, it does aggressively and in large numbers target individuals at the core of the immigration system: those individuals legally eligible to become permanent residents. Many fewer people are admitted to the United States as permanent residents than on temporary, nonimmigrant visas for tourists, students, business visitors, temporary workers, and many others.

But despite being fewer in number, permanent residents are not a sideshow in the immigration system, as much of the reporting on Trump’s new order has implied when downplaying the reach of the decree. To the contrary, they are at the very heart of the immigration system, the individuals welcomed and integrated into American society most expansively under the immigration laws. Once admitted, they acquire many of the rights, benefits, and obligations held by U.S. citizens, including the ability to live and work in the United States indefinitely. Eventually, they may seek to become citizens themselves.

Trump’s decree imposes no new restrictions on temporary visas, reportedly due to pushback from the business community. Nor does it ban individuals already within the United States from becoming permanent residents—likely because the provision invoked as its legal basis only authorizes suspension of “entry” into the United States. (That said, officials nevertheless do appear to be creating other bureaucratic roadblocks to inhibit those individuals from becoming permanent residents, yet another brick in the “invisible wall” that the Trump presidency has quietly been erecting in the shadows of the immigration system.)

While the order includes some exemptions—for spouses and children of U.S. citizens, business investors, health care professionals, and others—they likely cover less than a third of individuals legally eligible to become permanent residents from abroad. Nor is it clear how those exemptions will be implemented. The proclamation also signals that its restrictions may be extended beyond sixty days, and eventually expanded to cover temporary visas.

From a public health perspective, it may be tempting to regard Trump’s emphasis on immigration as nothing more than a distraction, a deflection of attention from deeper failures in the Trump presidency’s responses to the crisis. The immediate effects of Trump’s directive may be limited, since in the short term, there likely will be very little immigration to restrict. Visa processing already has been mostly suspended during the pandemic, and migration and travel have been greatly curtailed.

However, Trump and his immigration restrictionist allies are candid about their longer-term designs. Indeed, the arguments that the Trump presidency makes to justify its immigration ban are not tied to the immediate crisis in any meaningful way. His other recent immigration directives in response to the pandemic have been justified exclusively as measures to contain and mitigate transmission of the coronavirus. Experts have disputed the effectiveness and legality of those orders, but as the pandemic is brought under greater global control, then the strength of justifications for broad restrictions on migration and travel will evolve and, in fits and starts, may subside over time.

By contrast, the rationale for Trump’s new order is more open-ended, malleable, and disingenuous. The order posits that because aggressive public health measures have reduced labor demand and increased unemployment, immigration restrictions are necessary to protect U.S. workers from competition for scarce jobs. But when will those claimed labor market effects—which, it must be emphasized, are sharply disputed by many experts—have sufficiently subsided for Trump to lift those restrictions? And based on what criteria?

For Trump, no changes in economic circumstances would likely ever be enough. For years, he and other immigration restrictionists have advanced exactly the same arguments about labor market competition—during non-crisis moments, with unemployment at record lows—to justify proposals to slash immigration levels and rewrite eligibility criteria for permanent residence. The pretextual rationale invoked in support of the new restrictions is a xenophobic evergreen, not a genuine response to the pandemic.

The immigration system established by Congress fifty years ago, under the landmark Immigration Act of 1965, balances a variety of different priorities—including labor market concerns, but also family reunification, the needs of employers, the desire to encourage immigration from a variety of countries, humanitarian protection, and fundamental rights. However, Trump’s new directive upends that congressionally established balance and seeks to impose a different, more restrictive set of priorities by executive decree.

For some employment-based visa categories, the law already requires employers to obtain government certification verifying that hiring immigrants will not have negative labor market effects. However, instead of respecting that congressionally-mandated process, Trump’s order instead concludes that labor certification is categorically insufficient, essentially writing that process out of the statute altogether. For other visa categories—including some employment-based immigrants, all family-sponsored immigrants, and the diversity visa program—Trump’s decree requires consideration of labor market concerns where Congress has expressly chosen to let other policy priorities take precedence. For example, while the law does not require labor certification for immigrants deemed to have “extraordinary ability,” Trump’s order nevertheless bans those immigrants based on the same supposed labor market concerns that Congress has decided are not concerns at all.

The order’s effects on family-sponsored immigration perhaps most vividly illustrate the ways in which the order directly conflicts with congressional priorities. Family reunification policies are the “bedrock” of immigration law, permitting citizens and permanent residents to sponsor spouses, children, parents, adult sons and daughters, and siblings as immigrants. Trump and other restrictionists have long disagreed with these provisions, assailing Congress’s existing priorities for facilitating what they disparage as “chain migration” and proposing legislation to curtail and limit family-based immigration to “nuclear” family members.

While Trump’s order does exempt some family members, that exemption is narrowly drawn to include only the spouses and children of U.S. citizens—the same preference for “nuclear” family members that restrictionists have failed to achieve through legislation. The proclamation makes no attempt to justify its selective family-based exemption based on labor market concerns or any other considerations. Indeed, the proclamation makes no specific findings about the supposed labor market effects of any particular category of permanent resident visas at all.

Ultimately, the Trump presidency’s latest immigration ban reads pretty clearly as an attempt to impose its restrictionist vision for the legal immigration system—lower overall numbers, different categories of immigrants—by executive decree, rather than through legislation. In fact, when one considers the order’s restrictions together with its exemptions, the overall immigration patterns that it would create closely resemble the contours of Trump-backed legislative proposals, such as the RAISE Act, that Congress has decisively rejected. Trump may believe that the president has “total authority,” but he most certainly does not have authority to supersede and rewrite the immigration laws that Congress has enacted just because he dislikes them.

The Trump presidency’s lawyers undoubtedly believe that its new directive will be validated when it is inevitably challenged in the federal courts, which Trump and Senate Republican Leader Mitch McConnell have been rapidly filling with reliably conservative loyalists. The Supreme Court’s decision in Trump v. Hawaii, which gave a green light to the Trump presidency’s third executive decree banning immigration from several predominantly Muslim countries, provides them with an additional basis for that confidence. In that case, Chief Justice John Roberts rested his opinion validating Trump’s Muslim exclusion order on a remarkably broad interpretation of the same provision that is also invoked as legal authority for Trump’s new order, concluding that the provision “exudes deference to the President in every clause.”

However, there are substantial reasons to conclude that Trump’s new order exceeds his legal authority. Roberts’s opinion in Trump v. Hawaii itself suggests that even under his expansive interpretation of the statute, the president does not have authority to “countermand Congress’s considered policy judgments” or to “override particular provisions” of the immigration laws. By ordering his own contested claims about the labor market effects of immigration to categorically supersede all of the other immigration policy priorities that Congress has enacted into law, Trump appears to have done precisely that.

In the years since Trump v. Hawaii was decided, Trump and his administration have been emboldened to invoke that same statutory provision to impose even more immigration restrictions, including a ban on individuals applying for asylum and a sweeping requirement that immigrants prove that they can obtain adequate health insurance coverage within thirty days. But despite the Supreme Court’s decision, lower federal courts have continued to respond to these directives with some skepticism.

While courts might be reluctant to second-guess executive actions during a genuine public health crisis, Trump’s immigration ban will undoubtedly appear to some judges more as an opportunistic effort to capitalize on that crisis than as a genuine crisis response. Administration officials themselves have not exactly tried to conceal the true reasons for their directive, openly telling reporters that Trump decided to issue the order to “pleas[e] his political base” and because polls “show[] him sliding in some swing states.” The two officials spearheading Trump’s immigration agenda, Stephen Miller and Ken Cuccinelli, have been even more direct in communicating the administration’s true intentions, candidly telling Trump surrogates last Thursday that the order should be understood as designed to pursue longer-term immigration policy goals, not as a temporary crisis response.

In that context, the Supreme Court might very well prefer not to become enmeshed with and tied to the election-year politics of Trump’s immigration agenda at all. As with Trump’s Muslim exclusion orders, it may find itself unable or unwilling to avoid doing so.