Meditation on Oral Arguments in the Travel Ban Case 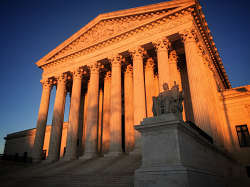 On April 25, the Supreme Court heard arguments in the travel ban case. The argument began with Solicitor General Noel Francisco characterizing the travel ban (formally called a Proclamation) as a narrow one and reserved only for countries who fail to meet the “baseline” requirements needed to vet their nationals. The SG called the travel ban a lawful exercise of power under 8 U.S.C. 1182(f), which allows a President to suspend the entry of any noncitizen or class of noncitizens for such period as he shall deem necessary “[w]henever the President finds that the entry of any aliens or of any class of aliens into the United States would be detrimental to the interests of the United States.” The SG’s legal arguments glossed over the human cost of the travel ban for U.S. citizens and lawful permanent residents seeking to reunite with their close family members overseas.

In response to a question by Justice Sotomayor about congressional limits, the SG argued that 1182(f) gives the President the authority to impose restrictions that go beyond the Immigration and Nationality Act’s (INA) grounds for inadmissibility, such as criminal record or participation in terrorism. The SG also indicated more than once that 1182(f) provides the President authority to “implement” the INA.

In response to a line of questions about the similarities between the travel ban and previous uses of 1182(f) by Presidents Ronald Reagan and Jimmy Carter, the SG acknowledged that the ban is the most detailed Proclamation issued under the statute and further suggested that the “waiver” process contained in the travel ban serves as an “exception” for national security or humanitarian reasons. However, Justice Breyer questioned the viability of the waiver process, citing to examples in amicus briefs and data by the Department of State.  Under the travel ban, to obtain a waiver, the person seeking entry must demonstrate that: 1) denying entry would cause the noncitizen undue hardship; 2) entry would not pose a threat to the national security or public safety of the United States; and 3) entry would be in the national interest and goes on to list ten examples of the type of people who might qualify for the ban, including but not limited to those with a medical need or for family reunification purposes. Pushing back on the implementation of the waiver, Justice Breyer noted that “undue” hardship is a relatively low standard as compared to the “extreme” hardship standard in the INA and stated more than once that among the 150 million people covered by the ban, there must be many who qualify for a waiver. Justice Breyer asked if the waiver provision amounts to “window dressing” and if the process itself had been publicized. The SG did not know how the waiver process was publicized but “suspected” that people know how to get it and went so far as to say that even without a waive the process is lawful.

Unfortunately, what lawyers and advocates have seen on the ground is far less notification and far more “window dressing” with the waiver scheme. As stated in an amicus brief I co-authored with Peter Margulies and WilmerHale on behalf of immigration law scholars, we state “In contrast to waivers under the INA, where applicants receive a waiver decision based on a review of supplemental evidence and specific statutory factors, waiver denials under EO-3 have often been made without consideration of the evidence submitted by applicants.” This last point not only raises concerns about whether the waiver process is even working but also how it like much of the Proclamation conflicts with or attempt to rewrite the INA.

In his opening, Neal Katyal, attorney for Hawaii et al argued that the ban is unlawful for three reasons: 1) it conflicts with Congress’s policy choices; 2) it defies on the bar on nationality discrimination; and 3) it violates the First Amendment.  Coming to this issue as an immigration attorney, the second point is crucial to understanding the degree to which the travel ban clashes with the INA and yet it received little air time during the oral argument. Section 1152(a) of the INA prohibits discrimination on the basis of nationality and other facts in the issuance of immigrant visas.  1152(a) was passed by Congress in 1965, the same year it abolished national origin quotas from the INA. By contrast, the travel ban excludes millions of immigrants for no other reason than nationality. According to Katyal, that includes 39% of all the visas covered by the travel ban. Katyal argued that 1182(f) must be read in harmony with the INA as a whole- to do otherwise would give the President power to countermand the INA and turn it into a “line item veto.”

How the Court will rule remains uncertain. Importantly, the travel ban remains in full effect because of twin orders issued by the U.S. Supreme Court on December 4, 2017 allowing the travel ban to be fully implemented, pending a decision by the Supreme Court. As of this writing the travel ban suspends entry for most nationals from Iran, Libya, North Korea, Somalia, Syria, Yemen, as well as select nationals from Venezuela. I hope the statutory arguments are successful and ultimately provide some relief to the thousands of people hurt by this unlawful ban.