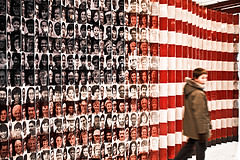 A First Amendment lawsuit by immigration judges against their office in the Department of Justice (DOJ) was stayed by the U.S. Court of Appeals for the Fourth Circuit last week, calling off oral arguments that had been scheduled for today. The immigration judges, through their union, challenged a policy of the Executive Office of Immigration Review (EOIR) that prohibited them from speaking in their personal capacity on any topic “related to immigration law or policy issues.” According to the complaint, immigration judges were denied permission or received no response to requests to speak at events such as legal training programs, law school classes, and even a middle school class. The Fourth Circuit ordered the stay to allow the new administration officials “to become familiar with the issues on appeal and determine how they wish to proceed.” The parties had jointly moved for the stay, suggesting that the immigration judges’ union and EOIR may consider resolving the issue by renegotiating the policy.

During the Trump administration, the power of the attorney general to manipulate immigration adjudication was exposed. Trump’s attorneys general used the self-referral power 17 times over four years, nearly four times the rate of any prior administration. Moreover, the attorney generals’ decisions were unprecedented in their scope, purporting to rewrite broad policy questions that even federal prosecutors had believed to be settled. These cases included decisions restricting asylum for individuals fleeing domestic violence or violence against their families that was not controlled by local authorities.

Other cases directly affected the way immigration judges handled cases in their courtrooms. For example, when a Guatemalan youth named Reynaldo Castro Tum failed to show up for his immigration hearings, Immigration Judge Steven A. Morley sought to temporarily close the case to allow DHS time to demonstrate that it had sent notices to the correct address. Instead, Attorney General Jeff Sessions referred the case to himself and announced a decision that immigration judges lack the power to close cases for administrative reasons at all – an issue that was not even presented in the underlying case. That process, known as administrative closure, is not merely a procedural nicety but an essential safeguard for immigrants with valid legal claims to residence. When a U.S. citizen spouse or employer files a petition to sponsor an immigrant who is in removal proceedings before the immigration courts, the immigration judge must temporarily close the case in order for the United States Citizenship and Immigration Service (USCIS) to review the petition. Without administrative closure, immigration judges have no power to do so. They are instead expected to hear the court case and potentially order the individual removed from the country – even someone who has a meritorious petition pending before USCIS.

The startling self-referral decisions of the Trump administration focused public attention on a system that had been broken since its inception. My research has revealed that the location of the immigration courts within DOJ resulted from historical accident, not from coherent notions of good government or just adjudication. In 1940, President Franklin D. Roosevelt sent Undersecretary of State Sumner Welles to meet with Hitler, Mussolini, and others about the state of war and future peace in Europe. Welles returned home convinced by rumors of a “fifth column” of Nazi sympathizers who looked like locals and would undermine the Allied nations from within. Welles convinced Roosevelt to move the immigration services from the Department of Labor, where they were viewed as part of workforce development, to DOJ to catch would-be spies and saboteurs. Though Roosevelt had resisted congressional pressure to make such a move for over a year, within three days of Welles’ recommendation, it was done.

The Biden administration’s willingness to review DOJ’s speaking engagement policy may make life a little easier for immigration judges today. But if relaxing a few restrictive policies has the effect of deflecting attention away from the dangers of having the immigration courts within a law enforcement agency in the first place, it may result in another tragically missed opportunity for fundamental reform. As long as the immigration courts remain part of DOJ, the possibility of abuse “lies about like a loaded weapon,” to borrow a phrase from Justice Robert H. Jackson, for any administration to use the immigration courts to further any political goals.

To prevent further abuses, President Biden should call for Congress to create independent, Article I immigration courts, similar to the U.S. Tax Court or the U.S. Court of Federal Claims. Judges on these tribunals are appointed by the president subject to the advice and consent of the Senate, but thereafter are insulated from politics for the remainder of their terms. Moving the immigration courts from DOJ to an Article I court system would not change the underlying immigration laws or DHS’s right to enforce them. It would simply ensure that immigrants receive a fair hearing in the courts of the United States, insulated from the shifting winds of politics.

Alison Peck is Professor of Law and Co-director of the Immigration Law Clinic at West Virginia University College of Law and the author of “The Accidental History of the U.S. Immigration Courts: War, Fear, and the Roots of Dysfunction.”