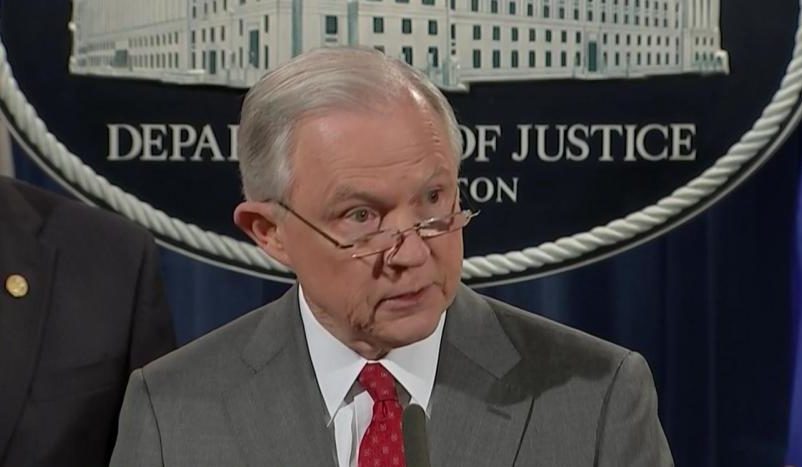 In a recent speech welcoming “the largest class of new immigration judges in history,” Attorney General Jeff Sessions took the opportunity to advertise some of the Trump administration’s more cynical anti-immigrant fabrications.

This one is about “catch and release”: immigration restrictionists’ pejorative term for the practice of releasing newly arrived asylum seekers and others during the pendency of their immigration proceedings. Such release has been contingent upon U.S. immigration officials finding that the migrants’ claims of persecution are preliminarily credible, and that they pose no risk of flight and no threat of harm to the public. The practice is not only legal and humane, but also efficient and effective.

As the myth goes, “catch and release” is to blame for a “surge,” starting under President Obama in 2009, in the number of people entering the United States illegally and, when apprehended, making asylum claims without merit. As a result, government agencies have been “overwhelmed,” and, therefore, this administration’s unprecedentedly brutal policies are justified.

As purported evidence, the Attorney General, first, cites an increase in the number of asylum claims at the border—from 5,000 in 2009 (4,000 of which asylum officers found preliminarily credible) to 94,000 in 2016 (73,000 of which were found preliminarily credible). Second, he affirms that only 20% of these “credible fear” findings, in addition to other asylum claims, have, “[f]or the last five years,” ultimately resulted in a grant of asylum upon a full hearing in immigration court.

Mr. Sessions has repeatedly mischaracterized this statistic as being synonymous with a low rate of meritorious asylum claims—and as a characteristic consequence of “catch and release.” But the figure is hardly unprecedented: it is well in line with the average asylum approval (versus non-approval) rate from 1973 to 1997 (23.6%)—the period immediately before current credible fear procedures were put in place, and when noncitizens claiming asylum at the border were more routinely guaranteed a full hearing in immigration court.

Mr. Sessions’ statement was even more misleading with respect to the number of illegal entries.

According to the Department of Homeland Security, still from 2009 to 2016, the estimated number of illegal entries decreased dramatically from about 1,300,000 to less than 700,000. The number of actual apprehensions at the border decreased from 541,000 to 409,000. (Thus, only a fraction of the people who entered the country illegally made asylum claims.) This gives us some sense of the amount of work born by immigration agencies dealing with the border. But given that, for example, in the year 2000, the number of border apprehensions alone stood at around 1,680,000 and there were far fewer border patrol agents, it seems beyond doubtful that the much lower unlawful entry numbers of the recent era could have really “overwhelmed” government agencies, as the Attorney General pretends.

To be sure, a significant increase in border apprehensions has been observed primarily for nationals of the Northern Triangle (El Salvador, Guatemala and Honduras)—roughly from 39,000 to 200,000. According to the United Nations High Commissioner for Refugees (UNHCR), the total number of (border plus other) U.S. asylum applications by this specific population also increased roughly from 7,250 to 107,000 during the same 2009-2016 period—largely accounting for what Mr. Sessions decries as credible fear claims “skyrocket[ing].”

The resulting total number of U.S. asylum applications in 2016 remained comparable to the number in, say, the years 2002 and 1995. Again, nothing unprecedented here. Regardless, the recent increase is most soundly explained by discrete factors specific to the relevant population—not by massive fraud which, according to Mr. Sessions, resulted from generally applicable policies of the last administration. (Otherwise, why were nationals from other countries not similarly incentivized by “catch and release”?) Indeed, as UNHCR data shows, the number of Northern Triangle asylum seekers in countries other than the United States also massively increased—eightfold, from 1,900 to 16,000—between 2009 and 2016.

Among the relevant “push” factors were, notably, the fact that, as reported by the Council on Foreign Relations, by 2015, Northern Triangle nations “consistently rank[ed] among the most violent countries in the world” with “significantly higher homicide rates” than their neighbors, particularly due to gang violence. Homicide rates in El Salvador and Honduras spiked particularly between 2009 and 2016.

Moreover, while the average immigration judge approval rate on asylum applications by Northern Triangle nationals has been closer to the 20% figure Mr. Sessions cites, this figure is, in fact, significantly higher than past approval rates for the same population. According to UNHCR data, for example, in the year 2000, for all three countries combined, there were 714 approvals for 5,264 denials, or an approval-versus-denial rate of about 12%—and 21,522 relevant asylum decisions total, bringing the (otherwise misleading) approval-versus-non-approval rate to a tiny 3%. That was a decade before the “surge” Mr. Sessions misattributes to “catch and release.”

Other factors explaining lower asylum case approval rates for Northern Triangle nationals include their lower likelihood of being represented by an attorney, compared with citizens of other major countries of origin for asylum in the United States—except Somalia. Somali asylum approval rates were less affected by this disadvantage, probably because they were based on a larger set of more familiar grounds for asylum early in the notoriously tumultuous 2009-2016 period—including violence at the hands of militant groups, as well as female genital mutilation. By contrast, caselaw recognizing the kind of persecution suffered by Northern Triangle nationals as a result of widespread gang violence or chronic gender violence was still being developed as of 2014. It is the latter developments that Attorney General Sessions abruptly ended in a 2018 decision now being challenged by the ACLU.

It is not the first time the nation’s chief legal official is caught either blatantly distorting publicly available data in an attempt to fit his preferred anti-immigrant narrative, or paying lip service to the “rule of law” only to undermine this principle’s underlying values of truth and fairness.

Sadly, given his—and the President’s—unrepentant record, it will likely not be the last.