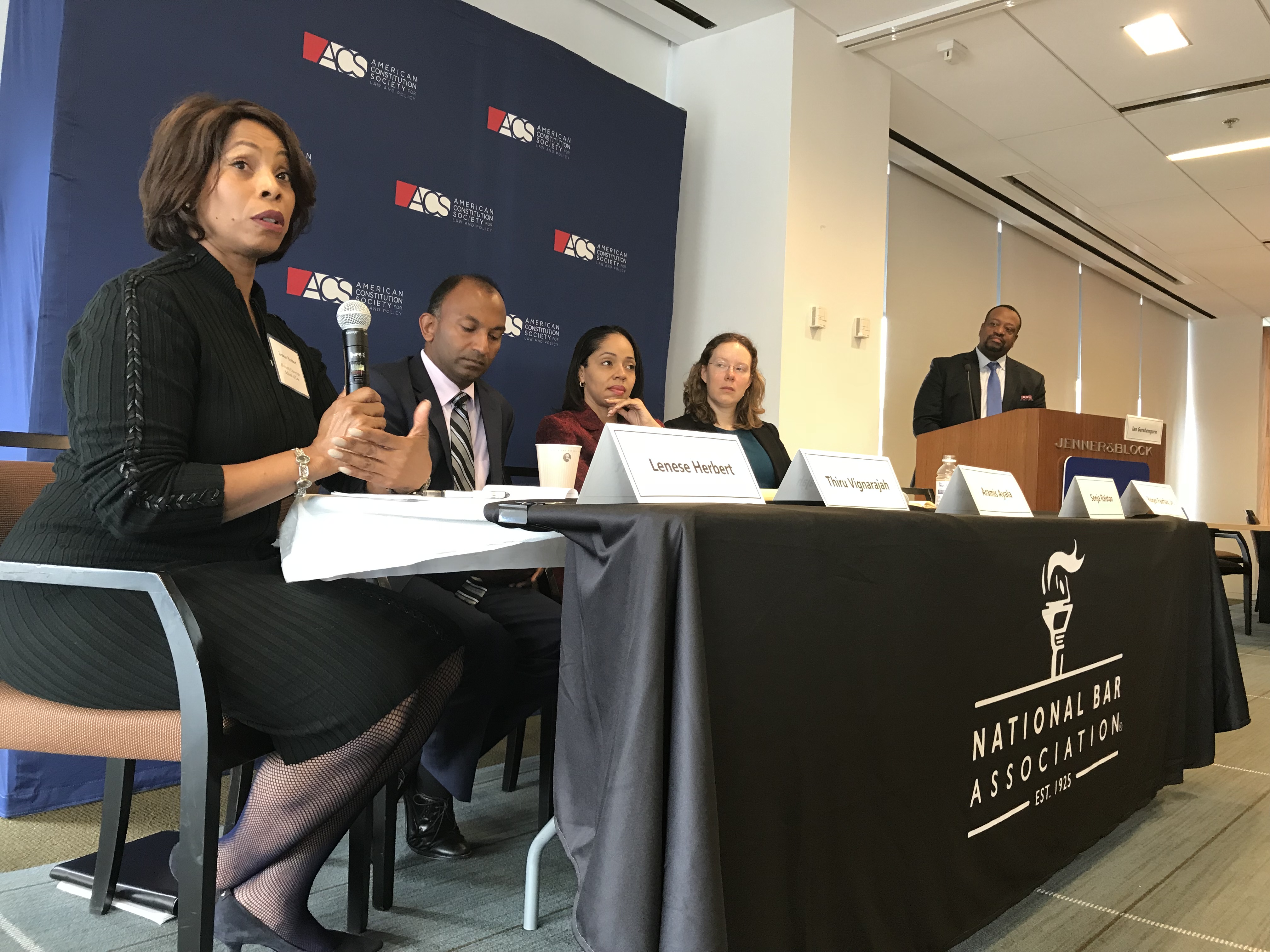 On Wednesday morning, the American Constitution Society and the National Bar Association presented “The Power to Promote Progress: Opportunities and Limits to Prosecutors Seeking Reform,” featuring a panel of current and former state and federal prosecutors discussing what it means to be a reform-minded prosecutor.

In the past few years—often in response to incumbent chief prosecutors’ failure to reflect the values and needs of their constituencies—cities and counties across the country have elected self-described “progressive prosecutors.” Recently elected prosecutors like Kimberly Foxx in Chicago, Kim Gardner in St. Louis (Missouri), Mark Gonzalez in Corpus Christi, Kim Ogg in Harris County and Aramis Ayala in Orlando, join the ranks of other reform-minded prosecutors like acting-DA Eric Gonzalez in Brooklyn, Cyrus Vance in Manhattan, Pete Holmes in Seattle, and James Stewart in Shreveport. In addition to elected leadership, reform-minded attorneys are also serving as line prosecutors in federal and state prosecutor offices across the country.

While prosecutors with progressive values are not new, more and more they are committing to undertake reforms not usually associated with those in law enforcement. These attorneys, many of whom are men and women of color, are seeking to leverage their roles as prosecutors to combat racial and economic disparities in the criminal justice system. Among other things, these prosecutors are focused on the need to reform the cash bail system, decriminalize low-level offenses, like marijuana possession and so-called quality of life crimes, and bolster support for undocumented immigrants when they're arrested. They seek to establish and give meaningful weight to conviction integrity units, hold police accountable for unjustified uses of force, pursue alternatives to incarceration, and support and protect members of marginalized communities.

State Attorney Aramis Ayala , one of the panelist for the event, noted early in the discussion that reform efforts like those she is undertaking, should not be thought of as a favor to the criminally accused, but rather understood as strategies in increase both public safety and fairness in the criminal justice system. Her fellow panelist, Thiru Vignarajah, a former Maryland Deputy Attorney General, echoed these thoughts, noting that it is often the prosecutor who is in the best position, more so than a defense attorney or judge, to protect the constitutional rights of the criminally accused.

The panel, which was moderated by Roger A. Fairfax, Jr. of the George Washington Law School, wrestled with a number of issues, including the expansiveness of prosecutorial discretion, the benefits and dangers of electing chief prosecutors, and the relationship between prosecutors and legislators. During a discussion about the role of line prosecutors in achieving reforms, Sonja Ralston, an appellate attorney with the Justice Department’s Criminal Division,[*] encouraged young prosecutors who may have concerns about a particular case to ask questions—based on cases, statutes, and legal standards—as a collaborative and less threatening way to raise concerns with colleagues, superiors or members of law enforcement they may find themselves working with.

Lenese Herbert, a former federal prosecutor and professor at Howard University School of Law, decried the toll she witnessed on prosecutors who pursued charges against police officers for unjustified uses of force, warning that prosecutors who tackle such cases should be prepared to be ostracized by their law enforcement partners, and perhaps even members of their own offices. It was this risk, and the media circus that can accompany police prosecutions, that led Ayala to conclude that the use of an independent prosecutor in police abuse cases is often the best approach. Vignarajah in contrast, suggested that local prosecutors should handle such cases, and that relying on independent prosecutors could otherwise reinforce the notion of a too-cozy relationship between prosecutors and police.

In the end, the panelists all agreed that, while reform-minded prosecutors cannot solve all the problems with our criminal justice system, they are key allies in any reform effort. They also encouraged reform-minded lawyers and law students, even those who don’t think of themselves as the law-and-order type, to consider the difference they might be able to make by serving in a prosecutor’s office. As Ralston noted, it’s important for young, reform-minded prosecutors to be in the room, because if they are, someone else will be.

[*] Ralston appeared in her personal capacity and her comments did not reflect positions of the U.S. Department of Justice.