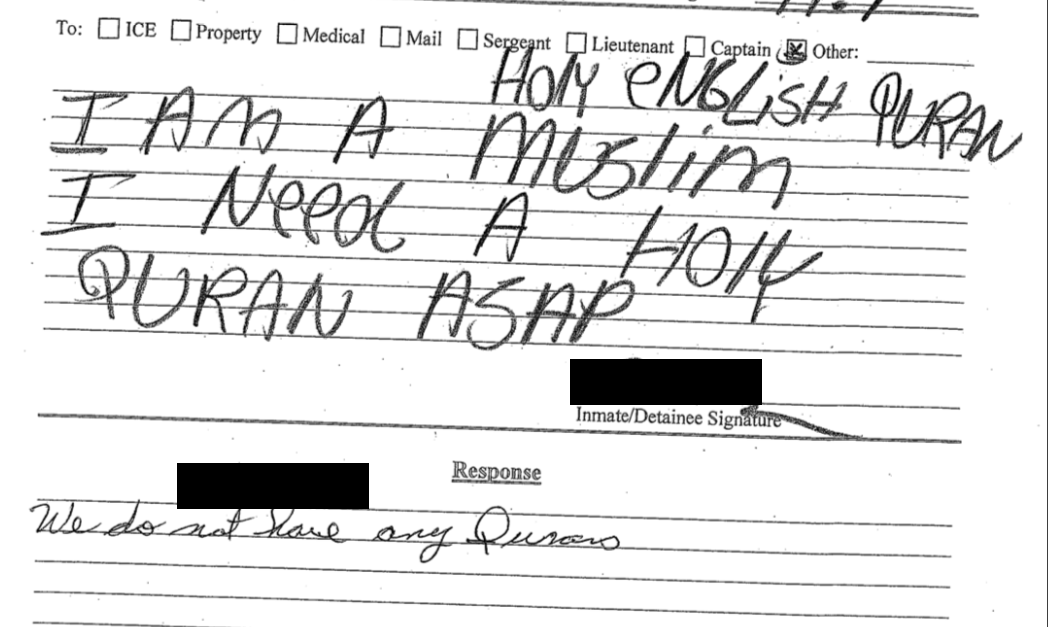 Religious freedom is a foundational value. It is so important that the First Amendment is dedicated to protecting it and there are clear laws in place requiring all detention facilities to allow people to worship freely. But immigration authorities don’t seem that interested in living up to that promise for Muslims and other non-Christian immigrants.

There are potentially dozens of detention facilities across the country, where immigration agencies and their contractors routinely mistreat and deny basic rights to inmates. Horror stories abound of immigration authorities locking children in cages, keeping detainees in dangerous conditions, feeding them spoiled food and even dozens of women in custody having miscarriages. But the abuse doesn’t end there.

Religious discrimination against immigration detainees is also a serious and growing problem. At a federal facility in Victorville, California, prison officials blocked Muslim, Catholic and Hindu immigration detainees from worshiping in groups and from obtaining religious diets and articles. In Texas, U.S. Customs and Border Protection would only provide a pork sandwich every eight hours to a Muslim detainee.

Similarly, when five Somali Muslim immigrants arrived at Glades County Detention Center, a jail in central Florida that rents beds to U.S. Immigration and Customs Enforcement (ICE), they were denied access to a Quran, religious meals and other necessities like beads, prayer rugs and even a simple sheet of paper with a prayer schedule printed on it. When the immigrants asked why the facility wouldn’t even take minimal steps allowing them to observe their religion, they were told, “Boy, you’re in Glades County.”

Federal and Florida law protect religious liberty for all. This should mean that all people in this country, including immigrants and refugees, are guaranteed the right to observe their religion, even while incarcerated or detained. But the shocking mistreatment of the men housed at Glades and other facilities shows that we are failing to protect this fundamental right.

There is no compelling reason for Glades County—or any facility—to deny Muslims Qurans and religious meals or to interfere with their prayers. Prayer schedules are free to print out. Charitable organizations will donate Qurans. And many prisons and detention centers around the country manage to provide Muslim detainees with meals at cost and that are halal, or religiously permissible. Additionally, Glades has no trouble allowing Christians to practice their faith. But Glades has refused to provide even these minimal accommodations to Muslims. Meanwhile, taxpayers dish out more than $ 30,000 a year per detainee to facilities like Glades creating massive profits for counties and investors.

ICE “detention standards” in theory guarantee minimum humane conditions for immigration detainees housed at local jails. At Glades and at many other contract facilities, however, only the most outdated standards apply, via the facility’s contract with ICE. And, as found by an Office of the Inspector General report on all contract facilities in June 2018, ICE refuses to enforce even these weak standards: “neither [ICE] inspections nor . . .  onsite monitoring ensure consistent compliance with detention standards, nor do they promote comprehensive deficiency corrections.

The Somalis’ experience is part of a pattern at Glades, which has consistently denied Muslims access to Qurans and religious counseling and services since at least early 2017. Yet when ICE reviewed Glades for compliance with religious exercise detention standards in 2017, it found that the facility complied, despite significant evidence to the contrary.

More than a year after arriving at Glades, the five Somali men are suing Glades County Detention Center and ICE for violating both Florida and federal law. As their attorneys, we at Muslim Advocates and our co-counsel at Americans for Immigrant Justice are working to vindicate their rights and halt future violations at the Glades facility. It is time for Glades to fully accommodate all detainees’ religious practices and for ICE to hold Glades accountable by imposing financial penalties or by declining to renew the detention contract.

After being told “Boy, you’re in Glades County,” one of the Somali immigrants wondered aloud, “But isn’t Glades County in America?” Allowing detainees to practice their faith isn’t just what the law requires, it is also the right thing to do. Anything else is an insult to the Constitution and offends American values.

Yusuf Saei is a Yale Law School Arthur Liman Public Interest Fellow at Muslim Advocates. His work is focused on the religious free exercise rights of prisoners and immigration detainees.