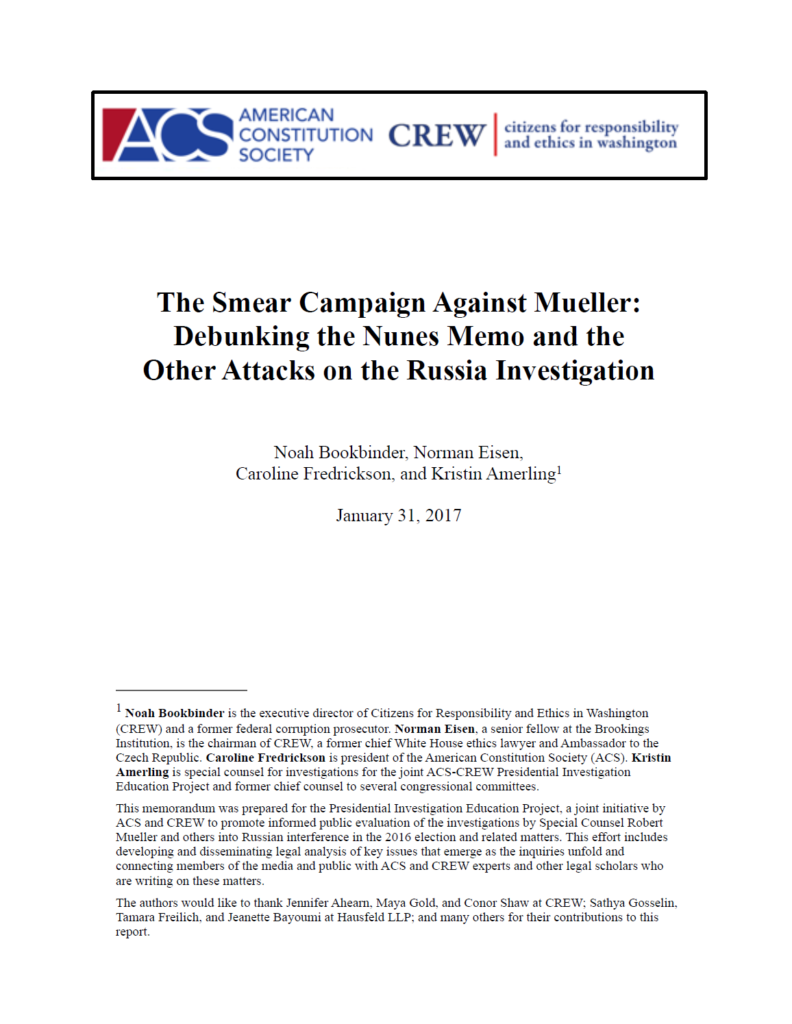 ACS-CREW report: The Smear Campaign Against Mueller: Debunking the Nunes Memo and the Other Attacks on the Russia Investigation

Authors Noah Bookbinder, Norman Eisen, Caroline Fredrickson, and Kristin Amerling examine the facts and law relating to seven major allegations regarding the conduct of the Russia investigation that collectively amount to one of the most sustained smear campaigns against honest government officials since Senator Joe McCarthy’s attacks of the 1950’s. The authors explain why (1) Mueller does not have conflicts of interest that disqualify him from being special counsel; (2) Mueller’s investigative team does not face conflicts of interest; (3) no DOJ employee actions have justified removal of Mueller; (4) Trump transition materials accessed by the Special Counsel likely do not raise privilege concerns; (5) the Mueller inquiry does not turn on opposition research funded by the Clinton campaign; (6) Representative Devin Nunes’s memo claiming that the FBI improperly obtained a warrant to conduct surveillance on Trump campaign officials lacks credibility; and (7) an additional special counsel is not warranted under applicable law. Although this inquiry is still unfolding and any assessment is necessarily preliminary, the report concludes that based on what is publicly known, the Special Counsel has conducted an inquiry that fully complies with relevant laws, rules, and guidelines – and that is wholly consistent with Mueller’s reputation for playing by the book.

Need for the Special Counsel

How Nunes attacks the Constitution when he tries to smear Mueller’s Russia probe, Sacramento Bee

Time for a Special Counsel in the Russiagate Scandal, Politico

ACSblog: A Special Prosecutor is Essential, But How

Claims on Conflict of Interest

The White House May Claim Mueller Has Conflicts of Interest. Oh, the Irony, The Washington Post.

Does Trump Have a Case Against Mueller?, Politico

ACSblog: Irresponsible to Attack Mueller for Exceeding his Mandate?

ACSblog; No Red Line: Mueller Will Follow the Money

Use of Warrants in Special Counsel Inquiry

What to know about the shadowy Nunes memo, Detroit Free Press

ACSblog: Mueller Will Face Tough Choices If He Finds Trump Broke the Law

ACSblog: Mueller Will Face Tough Choices If He Finds Trump Broke the Law

Fallout from the Comey Dismissal

ACS Briefing Call: The Fallout From the Comey Dismissal

How Every Lawmaker Has Reacted to Comey’s Firing So Far, The New York Times