The GOP Has Shot the Messenger. Now Will They Investigate His Claims? 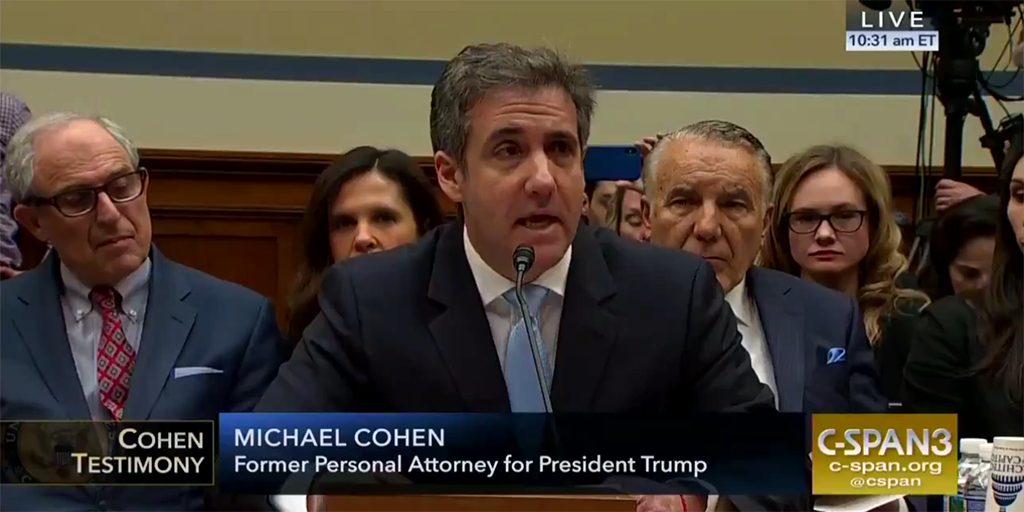 The House GOP spent the first two years of Trump’s presidency protecting him by deliberately not asking questions. Yesterday, they made up for lost time. But it was not Michael Cohen’s explosive allegations of presidential misconduct they were interested in exploring with their queries. No, their goal was to kill the messenger.

Cohen, President Trump’s one-time personal lawyer and “fixer,” is a shady character to be sure. He has been convicted on multiple charges, including lying to Congress. But he was speaking the truth during his appearance before the House Oversight Committee when he said, "…the American people don't care about me, they want to know what it is that I know about Mr. Trump." And that would appear to be lot.

In his testimony, Cohen alleged numerous ethical breaches and criminal acts on the part of the president, many for which Cohen himself apparently served as main actor. He spoke of illegal campaign payoffs, rigging of electoral polls, threatening people who had crossed the president, possible witness tampering, and even falsifying financial records. He spoke of conduct in and out of office that would cross even the most generous reading of ethical and legal boundaries. Certainly, the actions Cohen detailed would have had members of the House GOP in an uproar had they occurred four years ago, with a different president behind the Resolute Desk.

Not since Watergate has a president faced such a swirl of accusations or had his alleged ethical and legal misdeeds so carefully laid out for the American public. But did House GOP members of the Oversight Committee feel compelled to explore the truth of these allegations? Or the evidence that might back them up? No. Instead, the day was a tiresome slugfest as GOP member after GOP member took their turns shooting the messenger, the time-honored strategy of someone who finds a messenger’s “message” inconvenient or downright threatening.

But we shouldn’t be surprised.

Congress is a co-equal branch of the government, one charged with the oversight of, among other things, the executive branch. But for the first two years of the Trump presidency, that oversight was almost non-existent. Congress instead became a one-party Trump Protection Society, with the House GOP especially standing out in terms of the lengths it went to shield the president from scrutiny.

Hearings were held, not to explore Trump’s conduct, but that of his accusers. The party of law and order turned on a dime and began wildly accusing law enforcement personnel of improper conduct. They questioned the legitimacy of duly-appointed investigators. Witness testimony was leaked when it helped the president and withheld when it didn’t. Promising avenues of investigation were shut down or slow-walked. And various reports and memos—paging Rep. Devin Nunes! —were issued, each with incomplete or easily refutable conclusions.

A more naked display of congressional cravenness one is hard-pressed to find.

President Trump rode out his first two years with deep personal frustration as his only real scar. Accusations flew, as did breathless presidential Twitter denials. The Mueller investigation loomed. But no imminent legal threat really emerged. And each back-and-forth news cycle seemed only to numb an already-numb American electorate, leaving many to wonder what was really going on. Fortunately, what the American people did hear and see was still enough for them to hand control of half of Congress over to the side that promised full scrutiny of the President’s suspect actions.

That Wednesday’s hearing happened at all is a good sign that Congress has resumed its checks and balances role. Still, Cohen is a flawed and nefarious character in a town full of them. And it would be unthinkable to charge the president with anything based on his testimony alone. But it would be equally unthinkable to dismiss his accusations based on past lies and recent convictions. He was there. He had a front row seat. He himself participated in many of the suspect activities he is alleging took place. And he had Trump’s trust. That alone should tell us that what Michael Cohen knows about President Trump is indeed worth investigating.

Sadly, two years of dormant oversight by a complacent House GOP means that investigation has only just begun.