On Presidential Immunity, Kavanaugh Skeptics Should Stay Focused On The Bottom-Line: If Confirmed, Will He Vote To Change Existing Law And Abort The Special Counsel’s Russia Investigation? 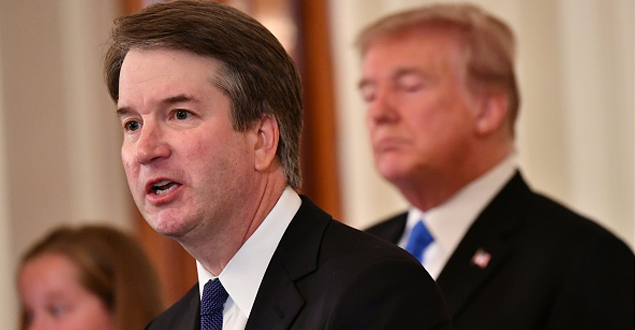 Judge Brett Kavanaugh’s expansive concept of presidential power has emerged as potentially a decisive issue in his confirmation battle, for two simple reasons: his record and the stakes.  Kavanaugh has created a lengthy written record, studded with calls for a presidency far more immune from legal checks than prescribed by existing law. The real-world consequences riding on what Kavanaugh’s record portends are huge: the viability of Special Counsel Robert Mueller’s investigation into Russia’s covert campaign to swing the 2016 election – and, indeed, any similar criminal investigation implicating a sitting president, such as the historic Watergate investigation by special prosecutors Archibald Cox and Leon Jaworski.

But capturing and effectively communicating this picture is not entirely straightforward.  Kavanaugh’s account of presidential authority is not completely free from qualification or ambiguity.  And while the rules established by existing Supreme Court precedents are clear, vigorous criticism of those precedents has long animated conservative backers of “unitary executive” constitutional theory, which holds that the Constitution requires untrammeled presidential control of all criminal investigations and prosecutions, including those affecting the White House. Displacing existing precedents with new White House-friendly rules would hardly seem an unrealistic prospect with Kavanaugh as a justice; he is a leading unitary executive exponent. Moreover, the debate has already been somewhat muddied, by suggestions, from respected progressive and centrist experts, that selective aspects of Kavanaugh’s writings imply that he would not rule to terminate the Mueller investigation. Finally, other progressive experts have contended that, whatever their scope, Kavanaugh’s presidential immunity notions should not “per se” block his confirmation, but should merely require that, once confirmed, he recuse himself from participating in any case implicating those views – i.e., a Trump challenge to Mueller’s investigation.

To keep the debate on course, skeptics need to keep the spotlight fixed on the single question to which the presidential immunity controversy boils down:

If confirmed, would Justice Kavanaugh vote to preserve existing law, or change it, in a manner that would abort the Mueller investigation, or any similar investigation of a substantial criminal scheme touching this or any other White House?

If Judge Kavanaugh does not persuasively refute the ample indications, in his judicial opinions and off-the-court writings and speeches, that he would support eliminating existing legal checks on presidential criminal overreach, that failure would establish a principled and broadly credible basis for voting “no” on his pending nomination.

To maintain this focus – and sustain its credibility – it will be necessary for skeptics to get a little further into the weeds, and address apparent ambiguities in Kavanaugh’s record. First, they must swat away claims that, in fact, Kavanaugh’s record portends no threat to Mueller’s investigation.

As I have written, the stand-alone remedy Kavanaugh recommends, impeachment, is, in reality, no remedy at all. As demonstrated by the nation’s half-century of experience from Watergate to the current Russian election-rigging attempt, impeachment depends on, and will not happen without, a prior criminal investigation by a special prosecutor, meaningfully insulated from direct presidential control.

The proper response to ambiguous implications in Kavanaugh’s writings is not to embrace hopeful inferences, but to pin the nominee down, and require him to acknowledge explicitly that existing law sanctions investigations like Mueller’s. Further, he must be pressed as to whether he continues to stand by past writings that the Constitution should be re-interpreted to bar such investigations.  In particular, Kavanaugh needs to be grilled on whether he supports the Supreme Court’s landmark 1974 decision requiring President Richard Nixon to turn over his secret White House tape recordings – especially in light of a 1999 interview surfaced  this past Saturday in documents submitted to the Judiciary Committee, calling that decision “perhaps wrongly decided — heresy though it is to say so.”

Curiously, the Just Security bloggers back away from concluding that such views should “per se . . . disqualify [Kavanaugh]” from confirmation.  Instead, they urge focus on a “narrower” question – under what conditions would he recuse himself from criminal investigations implicating the president.  This seems a wrong turn.

At least at this stage, narrowing Kavanaugh’s presidential immunity views to a mere recusal issue would seem a textbook example of gratuitous negotiating against oneself, prematurely conceding that he will, perhaps should be, confirmed.

Moreover, expressing general jurisprudential views, as Kavanaugh has in his expositions on presidential power, is generally not considered grounds for disqualifying a judge from participating in a case – as distinguished from expressing an advance view tantamount to prejudgment of the case’s factual as well as its legal configuration.  Thus to conflate ideological with fact-and-law-specific prejudgment could fuel subsequent politically-driven demands to step down, for judges and justices on all sides of the spectrum.

Much more important, taking disqualification off the table misses the mark on the merits and also, quite likely, the politics of Kavanaugh’s posture on presidential immunity.  Should the Senate confirm a Supreme Court nominee who repudiates, so, presumably, would overrule, Supreme Court precedents that exposed the evidence that obliged Richard Nixon to resign, and that authorize Robert Mueller to determine the scope of and participants in Russia’s scheme to rig the 2016 election?  Will senators in competitive 2018 races want to vote, in effect, to give the current and other presidents a blank check to break the law?  Whether Kavanaugh is confirmed or not, do we want the Supreme Court to write off Congress as indifferent to whether the Court overrules United States v. Nixon and subsequent precedents permitting reasonable arrangements to insulate special counsel investigations from political interference?

Questions like those offer compelling reasons why Judge Kavanaugh’s views on presidential immunity – which he will have ample opportunity to clarify in his hearing -- should be a confirmation deal-breaker for anyone, in either party or no party, seriously concerned about preserving the rule of law in this country.

Simon Lazarus is a lawyer and writer, former White House domestic policy staffer for President Jimmy Carter, and a frequent contributor to this blog.

Hearings, Importance of the Courts, Nominees