“You’ve Always Had the Power.” Marijuana, Federalism, and Separation of Powers 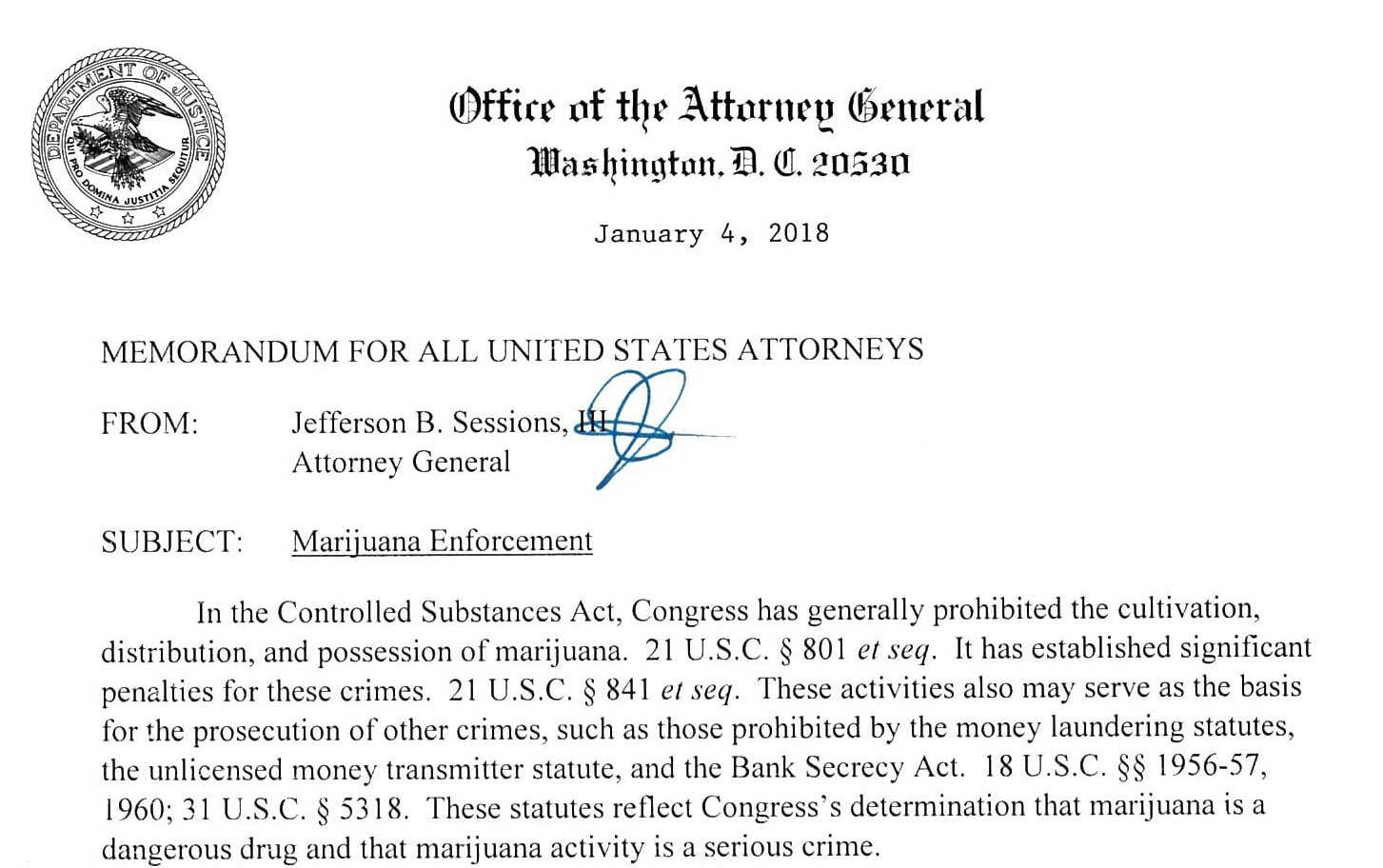 When Attorney General Jeff Sessions announced last week that he was rescinding the 2013 Cole Memorandum, marijuana policy was once again back on the national stage. The Cole Memo, issued by the Obama Justice Department, stated that those using, producing, or selling marijuana in compliance with robust state regulations would not be targeted by federal prosecutors. With the Cole Memo gone, there was renewed concern that state-level marijuana law reform could be undone by federal enforcement of the Controlled Substances Act (CSA).

The reaction against Sessions’s action was swift. Republican Senator Cory Gardner took to the floor of the Senate, condemning Sessions’s decision as a broken promise. Senator Gardner also announced that that he would block all Justice Department nominations until the Attorney General made good on his pledge to defer to the states on marijuana policy. Others on both sides of the aisle made similar calls on Sessions to respect the will of the voters in the 29 states that made marijuana legally available for at least some adults.

While marijuana policy has been seen primarily as a federalism battlefield – calling into question the appropriate division of authority between the state and federal governments to regulate the drug – it is now becoming clear that it is as much about separation of powers as it is about federalism. Like Dorothy at the end of the Wizard of Oz, Congress is now realizing that it had the power to fix matters all along. While the Justice Department has broad authority to enforce federal law, it is obviously up to the Congress to determine what that law is. Sessions’s actions have spurred Congress to reassert its authority in this area and members of both houses are now considering what options remain available to them.

Most immediately, Congress could extend the Rohrabacher-Blumenauer Amendment that since 2014 has prohibited the Department of Justice from using allocated funds to interfere in state medical marijuana laws. On January 11th California Representative Barbara Lee introduced a bill that would make the Amendment permanent, apply it to both medical and medical marijuana laws, and prohibit both criminal and civil enforcement actions against those acting in compliance with state marijuana laws.

Such a fix could forestall an immediate crackdown, but it would only have the effect of restoring the tenuous status quo ante – a world in which thousands of businesses and millions of people were engaged every day in conduct that remains felonious under federal law even while it is authorized and regulated by the states. So long as this conduct remains illegal under federal law, there are significant negative consequences for both businesses and individuals, even if the federal government is prohibited from enforcing the Controlled Substances Act. Businesses have trouble obtaining basic banking services and are taxed at confiscatory rates as a result of a federal law that denies them nearly all business deductions. Individuals risk losing their jobs, parental rights, or government benefits by engaging in conduct that remains criminal in the eyes of the law.

Thus, if Congress truly wishes to empower the states to explore alternatives to marijuana prohibition, a mere ban on federal enforcement will not suffice; rather, it must change the legal status of the underlying conduct. Senator Cory Booker’s Marijuana Justice Act would remove marijuana from the CSA entirely, take steps to undo the damage wrought by the discriminatory enforcement of marijuana laws over the years, and create a path by which those imprisoned for marijuana crimes could have their convictions overturned or their sentences lessened. The SMART Enforcement Act would make the CSA inapplicable in those states with robust state-wide marijuana regulations, leaving it in place only in those states choosing to be governed by it.

Ironically, Sessions’s attempt to crack down on states moving away from prohibition is having the effect of focusing energy and attention on alternatives to prohibition at the federal level.