The Teacher and Her Gun: Shots Fired in the Sanctuary 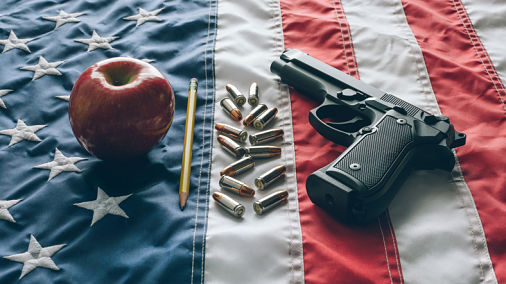 In the aftermath of yet another tragic school shooting, this time at Marjory Stoneman Douglas High School in Parkland, Florida., on Feb. 14, where 17 people were killed and 15 others were wounded, our collective anguish and outrage has led yet again to strident calls for the implementation of meaningful reforms to avert future tragedies, i.e. the next school shooting. According to the Washington Post, “more than 150,000 students attending at least 170 primary or secondary schools have experienced a shooting on campus since the Columbine High School massacre in 1999,” and that “On average, two dozen children are shot every day in the United States, and in 2016 more youths were killed by gunfire — 1,637 — than during any previous year this millennium.” The clarion call and the mandate to action, particularly given the ardent activism of the surviving high school students from Parkland, has never been more driven and focused.

One profoundly wrong-headed, dangerous, and ill-conceived, (the term “knee-jerk” comes immediately to mind), recommended approach to the issue of guns and shootings in schools advocates for the arming of teachers, in effect “deputizing” them as the front-line troops in the battle against the heavily armed men and boys who commit the vast majority of school shootings in the United States. (Nikolas Cruz, who killed 17 staff and students in Parkland with his legally purchased AR-15 assault rifle, is a 19-year-old). By this inane logic, we ought also to arm theatre ushers, nightclub bouncers and bartenders, and performance artists. We would thus avoid the mass shootings and carnage that have taken place in movie theatres, nightclubs, and concert venues.

I have carried a firearm for most of my adult life; in an earlier career I was a police lieutenant. I have not held a gun in my hands since I left law enforcement for an academic career over a dozen years ago and, given that I teach 50 freshman students this semester who are all 18 or 19 years old, I might qualify as a teacher, albeit not of the high school pedigree. And I see no place for guns in the hands of those who, like me, occupy the privileged position of educating young people. Standing before students in a classroom with a gun is a degradation of the pedagogic relationship between teachers and students, casting suspicion and mistrust among classroom participants and thrusting the teacher into the unwelcome and unsolicited role of enforcer, sentinel, warrior.

Writing about school shootings and school-related violence, Aislinn O’Donnell is concerned  with what she calls the “securitization” of education, the move toward an environment characterized by “control,” “behavioral management strategies,” the “suspension and expulsion of students for minor infractions,” “punitive responses…that criminalize children,” “fortification of the site of the school,” and “practices of risk management that can increase risk.” Arming teachers will contribute to this “securitization” of our schools in ways that are inimical to the culture of learning, trust, respect, and nurturance that are characteristic of American classrooms. The call to have teachers carry guns in classrooms poses a short-sighted and uninformed surrender to the current zeitgeist of ignorance, impulse, and turpitude that characterizes much of what presently imposes itself on our fractured public discourse, a discourse that has deteriorated to a point where there are those who actually believe that giving guns to school teachers makes sense.

The President of the National Education Association, Lily Eskelsen Garcia, believes that “Bringing more guns into our schools does nothing to protect our students and educators from gun violence, Educators need to be focused on teaching our students. We need solutions that will keep guns out of the hands of those who want to use them to massacre innocent children and educators. Arming teachers does nothing to prevent that.”

The objections to this thoughtless and foolish proposal are many, but the primary and most vocal objections lie rightfully in the consequential and perhaps irreversible damage that armed teachers in classrooms pose for our system of education in the United States. Teachers with guns impress upon our children and young people that they are not safe in school; that potential intruders and murderers are constantly lurking in the hallways and classrooms; that everyone is potentially suspect, and that schools are always and already places fraught with peril, violence, and calamity. Teachers with guns convey the tacit message that schools are not sanctuaries where stimulation, growth, knowledge, and wonder are experienced and acquired, but rather dispiriting and cheerless places marked with the tension, anxiety, mistrust, suspicion, and dread that are characteristic of other potential locations of conflict, confrontation, and armed engagement.

And where there are guns, there will be mishaps, accidents, injuries, and yes, the deaths of innocents. In floating the proposal to have our teachers carry guns while they are teaching their students (something that I can’t believe that I just actually typed), we are asking of them the impossible and placing them squarely in the crosshairs of a position that is at once untenable and potentially deadly, with a very slim chance for a successful outcome should a genuine threat emerge.

The vacuity and inanity of this proposal derail the narrative from what should be its proper target: the guns, and particularly the military assault rifles that are far too often found in the hands of those least suitable to be in their possession. Until and unless our political leaders attain the fortitude necessary to enact meaningful legislation that significantly restricts the availability and acquisition of firearms, and particularly military-grade assault rifles, we are doomed to revisit the topic yet again, after the next mass shooting. Of potential remedies for this uniquely American scourge, arming teachers should not be given even remote consideration. Most teachers would no doubt agree.