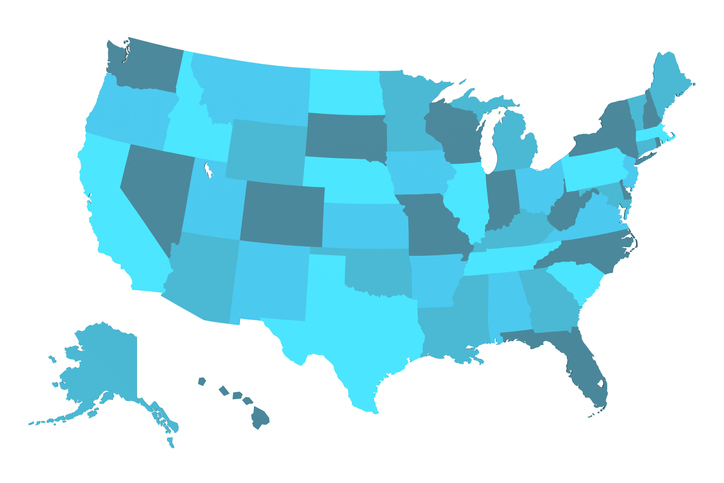 Every year, ACS publishes a guide for our lawyer and student chapters around the country to use in planning events. The guide offers an overview of a specific legal issue, provides resources for those seeking more in-depth analysis, and identifies experts who can serve as possible speakers. The following excerpt is from the introduction of the 2019 Program Guide: Progressive Federalism.

Nearly a century ago, Justice Brandeis, speaking of the division of power between the federal government and the states enshrined in the U.S. Constitution, famously wrote that “[i]t is one of the happy incidents of the federal system that a single courageous state may, if its citizens choose, serve as a laboratory; and try novel social and economic experiments without risk to the rest of the country.”[1]

This notion of the states as “laboratories of democracy” is rooted in the Tenth Amendment’s directive that “[t]he powers not delegated to the United States by the Constitution, nor prohibited by it to the States, are reserved to the States respectively, or to the people.” At a time when the federal government seems single-mindedly dedicated to revanchist policies, these laboratories of democracy could offer a path toward more progressive policies in a range of areas.

While the Tenth Amendment provides a potential framework for a progressive federalist agenda, too often it has been invoked to promote a vision of states’ rights that justifies some of the most horrific actions in our country’s history. Supporters of the “Lost Cause” narrative, for instance, argue that the Civil War was fought over states’ rights and not slavery. Historian Paul Finkelman, however, points out that when South Carolina seceded from the Union over states’ rights, “the specific right in question concerned the ownership of human chattel.”[2]

One of the South’s main complaints was that “the northern states would not vigorously cooperate in the return of fugitive slaves...In other words, for South Carolina, slavery and states’ rights were not mutually exclusive; in fact, they were the same thing.”[3] Nearly one hundred years after the end of the Civil War, states were still using states’ rights arguments to defend discrimination against African Americans in the form of Jim Crow laws.[4] And only a few years ago, the Supreme Court relied on federalism and states’ rights arguments to gut the Voting Rights Act and remove a vital protection against minority voter disenfranchisement.[5]

Federalism’s ugly past, however, does not have to be federalism’s future.

Some argue that federalism is morally neutral, has no political valence, and, in fact, can be used to further progressive policies.[6] This can be seen in areas as diverse as state decriminalization of marijuana and state programs to expand the availability and affordability of health insurance through the Affordable Care Act.[7] In the face of federal recalcitrance, “progressive federalism empowers democratically accountable governments to meet the needs of the people while ensuring human rights for all” in a variety of areas, including immigration, voting rights, the environment, and police accountability, all of which ACS’s 2019 Program Guide examines in more detail.[8]

A federal government hostile to state and local progressive policies has its own powerful tool in the Supremacy Clause. Federal preemption—the idea that federal law displaces state law when the two conflict—is rooted in Article VI of the U.S. Constitution, which states, “[t]his Constitution, and the Laws of the United States which shall be made in Pursuance thereof . . . shall be the supreme Law of the Land.”

Relying on the Supremacy Clause, the Supreme Court has noted that “any state law, however clearly within a State's acknowledged power, which interferes with or is contrary to federal law, must yield.”[9] Therefore, “state laws that ‘interfere with, or are contrary to the laws of Congress, made in pursuance of the constitution’ are invalid.”[10]

The Supreme Court has extended this doctrine to local ordinances as well, holding, “the constitutionality of local ordinances is analyzed in the same way as that of statewide laws.”[11] In short, when Congress passes federal laws while acting within its constitutional powers, any state or local laws that are contrary to or otherwise in conflict with federal laws are deemed preempted and therefore invalid.

These two types of implied preemption are known as field preemption and conflict preemption.[14] Field preemption occurs when “Congress has chosen to oust the states from a given regulatory arena, to permit an exclusively national and unitary regulatory regime to function.”[15] Conflict preemption occurs where “‘compliance with both federal and state regulations is a physical impossibility,’ or where state law ‘stands as an obstacle to the accomplishment and execution of the full purposes and objectives of Congress.’”[16] States and the federal government can—and often do—come into conflict when it is unclear what Congress intended or whether a state’s policies directly conflict with federal policies. In these cases, federal courts must step in and resolve these disputes.

ACS's 2019 Program Guide will highlight four areas where federalism may permit states and localities to pursue progressive policy goals: immigration, voting rights, environmental policy, and police accountability. It will also consider some of the arguments for and against preemption that the federal government, states, and cities may raise in pending or anticipated litigation seeking to resolve preemption disputes.

[11] Hillsborough Cnty., Fla. v. Automated Med. Labs., Inc. 471 U.S. 707, 713 (citation omitted). While ACS’s 2019 Program Guide focuses on the relationship between the federal government and states and between the federal government and cities, there are also preemption issues at play between states and cities themselves. For a discussion of this topic see Richard Briffault et al., The Troubling Turn in State Preemption: The Assault on Progressive Cities and How Cities Can Respond, ACS Issue Brief (Sept. 2017).