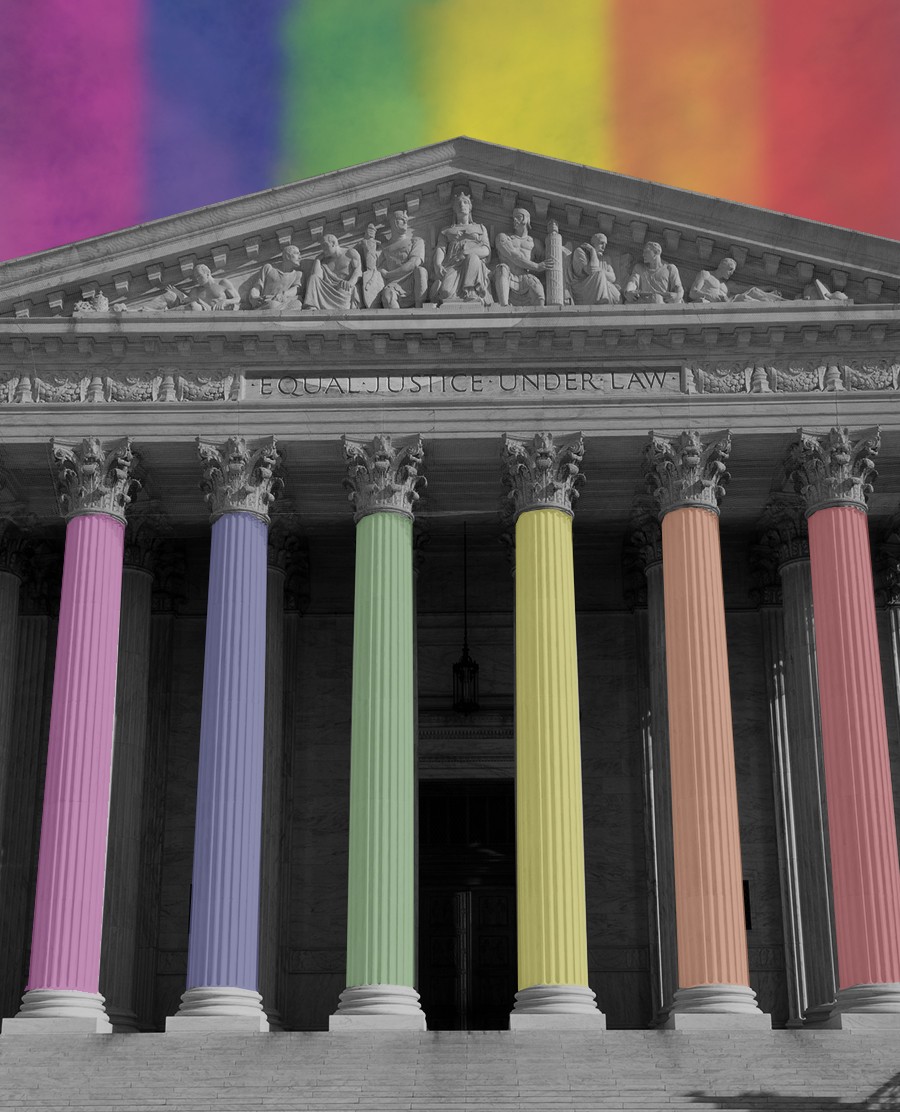 During the long tenure of now-retired Justice Anthony Kennedy, gays and lesbians enjoyed a remarkable run of success at the Supreme Court. In four landmark decisions written by Kennedy, the Court gave a strong form of Equal Protection scrutiny to anti-gay legislation starting in 1996; swept away the last remaining sodomy laws in 2003; struck down the federal Defense of Marriage Act in 2013; and brought marriage equality to all 50 states with Obergefell v. Hodges in 2015.

Since Kennedy’s retirement three years ago, the Court has by some measures become more conservative. Still, last year it delivered a surprising and welcome ruling in Bostock v. Clayton County that Title VII, the federal law prohibiting sex discrimination in employment, also encompasses sexual orientation and gender identity. As LGBTQ anti-discrimination legislation fails to advance in Congress, we were again reminded that sometimes it takes unelected justices, not the political process, to deliver policies most Americans endorse.

As we approach the end of both a Supreme Court term and another Pride month, three things seem clear. First, the future of marriage equality is secure. Second, the aggressive legal war by religious conservatives against compliance with LGBTQ anti-discrimination laws has so far found quite limited success. Third, as transgender equality has become the frontier of the LGBTQ movement, the Supreme Court has declined to disturb favorable lower court rulings on important questions of trans equality.

Why Marriage Equality Is Secure

When conservative Catholic Amy Coney Barrett was nominated to the Court last fall, LGBTQ advocates sent out distress signals warning she might join an effort to roll back Obergefell. But that idea seems more far-fetched than ever.

There are now well over half a million married same-sex couples in the United States. Marriage equality enjoys record-high support of 70 percent of Americans, including a majority of Republicans. Same-sex marriage has become a quotidian and well-accepted fact of American life. The religious right – recognizing the crushing political, cultural, and legal defeat it received on the issue – has largely moved on.

In a little-noticed per curiam decision in 2017, Pavan v. Smith, the Court clarified that the Constitution protects equality not only in getting married but in being married. The case involved Arkansas’s attempt to deny birth certificates for the children of married same-sex couples on equal terms with straight couples. In Pavan, the Court rebuked Arkansas and ordered it to treat same-sex couples equally. The Court underscored that, when it said two years earlier in Obergefell that states may not “exclude same-sex couples from civil marriage on the same terms and conditions as opposite-sex couples,” it meant also the “rights, benefits and responsibilities” that accompany marital status.

Chief Justice John Roberts, who had vigorously dissented in Obergefell, joined the majority in Pavan.  Although three conservative justices dissented in Pavan, they did so primarily to object that the Court was disposing of the case without full briefing and oral argument.

More recently, in October 2020, the Court rejected a cert petition from Kim Davis, the Kentucky clerk who had illegally refused to issue marriage licenses to same-sex couples. Davis was subsequently sued for monetary damages by two of the couples she had denied, and she lost in the lower courts. Apparently, no justice, not even the most conservative ones, thought the Supreme Court should hear Davis’s appeal (which was based on the doctrine of qualified immunity) of the Sixth Circuit’s decision against her.

Though they did not dissent from denying the cert petition, the Court’s two most hard-right justices, Clarence Thomas and Samuel Alito, issued a surly “statement” on what they saw as Obergefell’s harmful effects on the religious liberties of marriage equality opponents. Thomas and Alito did not argue that the core holding Obergefell should be revisited; their main argument was that marriage equality requires greater accommodations for religious opponents. Conservative Justices Roberts, Brett Kavanaugh, and Neil Gorsuch did not join the statement, suggesting a clear desire among a majority of the justices to put the issue of same-sex marriage behind them once and for all.

In light of all these developments, there is no chance the Court will retreat from the principle that same-sex couples have a constitutional right to marry.  Most of the justices care about things like stability in the law (especially in an area like marriage, where children and property are involved), the reliance interests of those who have already married, and how the Court as in institution is perceived. Moreover, the calculus is different from the issue of abortion, where religious conservatives and the Republican party have never relented in their efforts to relitigate Roe v. Wade. Obergefell brought the Court into line with long-term cultural changes and public attitudes regarding marriage, and the Court has no appetite for going back.

In the celebrated case of Colorado baker Jack Phillips and his Masterpiece Cakeshop, religious conservatives pushed for a bold new interpretation of the First Amendment that would have greatly expanded their power to exempt themselves from laws protecting LGBTQ people against discrimination. Instead, the Court in 2018 issued a narrow ruling that gave Phillips a nominal victory but wrote no new First Amendment doctrine that could be used to attack anti-discrimination laws.

Earlier this month, the Court decided Fulton v. City of Philadelphia, in which a Catholic foster care agency which declined to work with married same-sex couples sued over a city policy barring such discrimination.  Fulton had been closely watched for how it might create new law at the intersection of religion and LGBTQ equality.

Again, the Court declined invitations from conservative activists for a sweeping decision that would grant greater privileges to religion. A unanimous Court – led by Roberts and including the newest conservative justice, Barrett – issued a dry and narrow decision that applied existing Free Exercise Clause precedents. While the decision went in favor of the Catholic agency, it turned on technicalities of language in the city’s policy, not normative judgments about the relative importance of religion vs. LGBTQ equality. Commentators who have warned in click-bait headlines that the decision will “devastate LBGTQ foster families” either do not understand it or are misrepresenting it. Significantly, the Court agreed that the city’s interest in equal treatment “is a weighty one,” because (and here it quoted from Masterpiece Cakeshop) “our society has come to the recognition that gay persons and gay couples cannot be treated as social outcasts or as inferior in dignity and worth.”

It’s worth noting that the battle in this case was more about symbolism than actual mistreatment of same-sex couples. No same-sex couple was prevented from serving as foster parents, because when Catholic Social Services encountered a couple it couldn’t serve, it referred the couple to another agency. This episode might teach LGBTQ advocates that, if we as a nation are to attain some measure of peaceful coexistence between LGBTQ rights and religious liberty, then, as I have argued, “occasionally the better path to justice and civil peace is to forebear from using all of the weapons that law makes available.”

Transgender equality is the cutting edge of the LGBTQ movement.  With Bostock, the Court dramatically expanded federal employment protections for trans people.  At the same time, even as red states are enacting animus-laden new laws attacking trans people, the Supreme Court seems disinclined to get involved in this culture war. This term it turned away cert petitions in two cases where lower courts had protected the ability of transgender students to use bathrooms and other sex-segregated school facilities based on their gender identity.

In December, the Court declined to hear a case in which an Oregon group of “parents for privacy” claimed that their and their children’s rights were violated when schools accommodated trans students. The plaintiffs lost in the lower courts, and the Supreme Court let those rulings stand.

Saying a school may accommodate transgender students without violating anyone else’s rights is not the same thing as saying the school must do so under federal law. But after protracted litigation involving transgender man Gavin Grimm, the Fourth Circuit U.S. Court of Appeals ruled last August that under Title IX, the federal law prohibiting sex discrimination in education, high schools must allow transgender students to use bathrooms that correspond to their gender identity.

Grimm has now graduated, but the Gloucester County School Board in Virginia refused to give up the fight and sought a writ of certiorari against the Fourth Circuit’s decision.  We learned Monday that the Court has taken a pass on this case as well. (The Court’s two unabashed right-wing activists, Thomas and Alito, said they would have granted the petition.) This is a major, high visibility victory for the ACLU, which represented Grimm.

With the Court’s current term drawing to a close, Harvard Law School’s Jeannie Suk Gersen observed this past weekend that “the Justices repeatedly defied expectations, with conservatives and liberals together forming majorities in high-profile cases in order to avoid or defer the fighting of deeper wars.” That observation seems especially accurate when it comes to legal questions affecting LGBTQ people. While we are no longer seeing the splashy, landmark decisions of the Justice Kennedy era, LGBTQ people have reason for optimism that constitutional and federal law will continue to respect and safeguard their equality and dignity.

Steve Sanders teaches and writes about Constitutional Law and LGBTQ legal issues at the Indiana University Maurer School of Law in Bloomington.  He has participated in groundbreaking litigation concerning marriage equality and transgender rights.