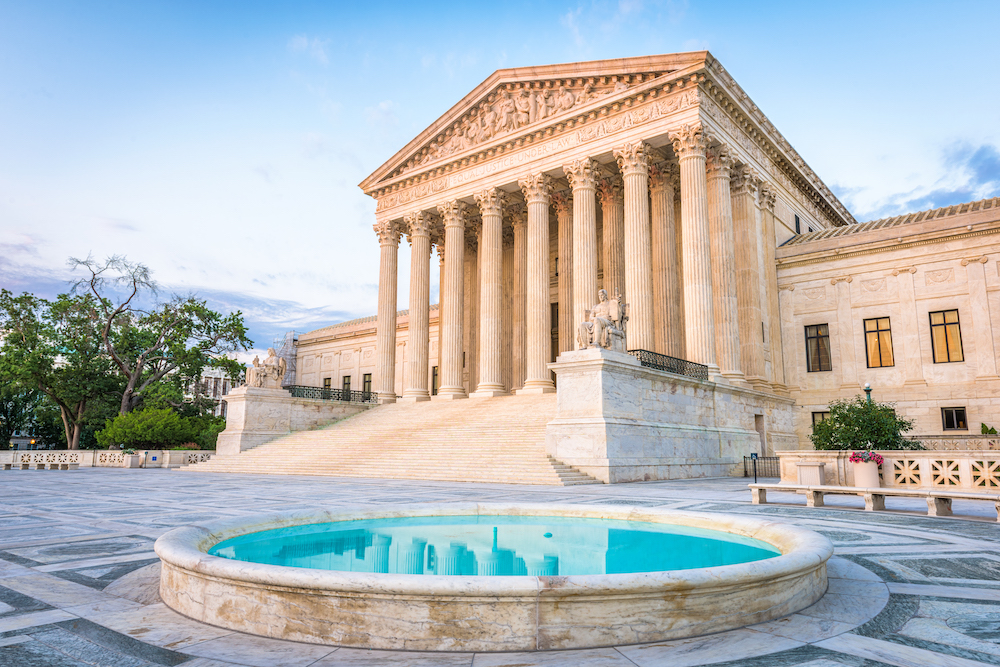 Professor Sanders has written and spoken widely on LGBT legal issues.  On behalf of the Human Rights Campaign, he co-authored an amicus brief to the U.S. Supreme Court in Obergefell v. Hodges (2015), which established nationwide marriage equality.

The Supreme Court ruled Monday that employment discrimination against gay, lesbian, bisexual, and transgender individuals violates Title VII, the federal statute that outlaws discrimination “because of [an] individual’s … sex.”  As happened after the Court’s marriage-equality rulings in 2013 and 2015, memes popped up juxtaposing the Court’s marble temple with rainbow flags.  The message seemed to be: “SCOTUS – even today’s more conservative, post-Anthony Kennedy SCOTUS – still loves LGBT people!”

Viewed purely by its result, the Court’s 6-3 decision in Bostock v. Clayton County, Ga., is a head-snapping, landmark victory for LGBT equality.  But the majority opinion is not a manifesto for LGBT rights or social equality.  Unlike Justice Kennedy’s three decisions about marriage and sodomy laws – which were based on constitutional law, not statutory interpretation – it does not rely on lofty concepts like “dignity,” or “emerging recognition” about LGBT people’s lives.

Instead, the opinion is an exercise in pure, academic textual analysis.  If an employer fires a man for dating a man, but wouldn’t have fired a woman who dates a man, the employer has engaged in discrimination “because of … sex.”  The same goes for an employer who fires a transgender man because his sex at birth was assigned as female, but wouldn’t fire a woman because her sex was assigned as female.  “The statute’s message for our cases,” wrote Justice Neil Gorsuch, is “simple and momentous:  An individual’s homosexuality or transgender status is not relevant to employment decisions.  That’s because it is impossible to discriminate against a person for being homosexual or transgender without discriminating against that individual based on sex.”  More generally, “When the express terms of a statute give us one answer and extratextual considerations suggest another, it’s no contest.  Only the written word is the law, and all persons are entitled to its benefit.”

Only Gorsuch could have written this Platonic archetype of textualism.  As Professor Richard Primus observed after the arguments in Bostock and its two companion cases, “being a principled textualist is a big part—perhaps the biggest part—of Gorsuch’s public identity as a jurist.”  If Gorsuch’s opinion doesn’t scramble our understandings about what it means to be a “conservative” versus a “liberal” justice, it does at least show that those labels can be an oversimplification.  As Professor Katie Eyer wrote on the ExpertForum last fall, “Neither textualism nor originalism are inherently ‘conservative’ approaches, in the sense of necessarily leading to politically conservative results.”

Be that as it may, it will be entertaining to watch the religious right – which sold its soul to Donald Trump in return for judicial appointments – set its hair on fire over the fact this LGBT rights slam-dunk came from the pen of Trump’s first Supreme Court nominee.

There will also be much speculation about Chief Justice John Roberts’ vote to quietly join the majority.  Jonathan Adler has argued that Roberts, in statutory interpretation, prefers “a ‘Burkean minimalism’ that seeks to reduce seismic effect of the Court’s decisions.”  But Bostock is seismic.  We must assume Roberts was won over by the sheer force of Gorsuch’s textualist logic, together with the ample examples he provided of how Title VII has been applied in ways not anticipated by Congress in 1964.

Gorsuch has been noted for the quality of his writing, and this opinion is highly readable.  It is filled with analogies to everyday human activity.  My Indiana University colleague Jennifer Drobac compared it to “a Chanel. Simple and elegant. It will not go out of style.”  And it actually spends more pages refuting the arguments on the other side than laying out its affirmative case.  Its backbone is textualist formalism, but it brims with intellectual and rhetorical passion.  It is an opinion that suggests faith in the powers of reason, logic, and rigor.

Of particular note, but easy to miss, is that Bostock accepts without question the idea that it is possible for a person to transition genders.  This may prove significant in future cases dealing with gender identity.

Since getting drubbed on the question of marriage quality, religious and social conservatives have devoted themselves to disparaging the very idea of gender transition as “lunacy” and a “disjunction between reality and perception.”  The Heritage Foundation’s Ryan Anderson, who has made himself the religious right’s standard bearer on this issue, has attacked what he calls “transgenderism” as “a belief system that increasingly looks like a cultish religion.”

Looking to the future, Bostock may also reverberate in profound ways for its explanation of what it means to discriminate “because of … sex” – that the phrase means more than just disparate treatment of men and women qua men and women.  The Fair Housing Act also forbids discrimination “because of … sex.”  In schools and education, Title IX forbids discrimination “on the basis of sex.”  Bostock’s logic surely will be invoked in litigation about related matters, such as the Trump administration’s rollback of protections against anti-LGBT discrimination in health care.

Does Gorsuch’s majority opinion succeed on its own terms as a work of textualism?  That debate will continue for years in the law reviews, and it is beyond my scope here to pass judgment.  But certainly Justice Samuel Alito wasn’t buying it.

In response to Gorsuch’s cool and confident 33-page majority opinion, Alito erupted in an outraged 54-page dissent.  Money passage: “The Court’s opinion is like a pirate ship.  It sails under a textualist flag, but what it actually represents is a theory of statutory interpretation that Justice Scalia excoriated––the theory that courts should ‘update’ old statutes so that they better reflect the current values of society.”

One might chalk up some of this opposition to the fact that, as Linda Greenhouse has argued, Alito is the Court’s most politically partisan and results-oriented conservative.  But in the contest for maestro of textualism, Gorsuch outclasses Alito.  For Alito, what it means to discriminate “because of … sex” was fixed when Title VII was passed in 1964.  In that sense, his argument is more originalist than textualist.  (The two are often confused.)  For Alito, the question of how Title VII applies to LGBT people is settled by the fact the Congress that passed the law couldn’t have imagined the Bostock majority’s result.  That’s an argument based on a paleo form of originalism that focuses on “original intended application.”  By contrast, Gorsuch explains why, for a textualist, none of that matters: Congress wrote a broad and sweeping command not the discriminate “because of … sex,” and so that’s what courts are obligated to apply.

Alito’s dissent can be boiled down to this: the majority’s textualist formalism notwithstanding, everyone knows the issue here is not discrimination on the basis of “sex,” but rather discrimination against people because they are gay, lesbian, bi, or trans.

Is Alito wrong on that?  And is a decision based on pure textualism something legal progressives should cheer?  Oliver Wendell Holmes, one of the guiding lights of legal realism, famously said that “[t]he life of the law has not been logic: it has been experience,” and that law “cannot be dealt with as if it contained only the axioms and corollaries of a book of mathematics.”  Yet approaching anti-LGBT discrimination and Title VII through the lens of pure textualism almost turns those maxims on their head.

In the wake of last fall’s arguments in these cases, Professor Nan Hunter of Georgetown lamented in a public Facebook post that “for most of the more than two hours of arguments, there was no exchange in which any Justice voiced, with any emotion, a note of empathy” about the experiences of LGBT people.  Yet that is the consequence of bringing anti-gay and anti-trans discrimination within Title VII.  At oral argument, the attorneys for the gay and transgender employees, Pam Karlan and David Cole, stayed relentlessly on-message that their clients had suffered discrimination because of their sex.

And so, as welcome as it surely is, Bostock does not provide the doctrinal or theoretical foundation for the next phase of the legal revolution for LGBT equality.  Queer Studies scholars have taught us that attitudes toward LGBT people are bound up with attitudes and stereotypes about sex and gender.  But the Court’s laser focus on sex discrimination means it does not discuss, much less attack, root causes of anti-gay and anti-trans discrimination, such as attitudes of heteronormativity, transphobia, or right-wing natural law dogma about sexuality.

Another consequence of Monday’s decision is that it will set back efforts to pass legislation at the federal and state levels specifically protecting LGBT people against employment discrimination.  Thus, Bostock will become fodder for ongoing debates over legislative versus litigation strategies for social change.  And it is important to remember Bostock is only about employment.  There is no federal law assuring LGBT people the right not to be turned away from businesses such as bakeries and florists, and fewer than half the states have such laws.

In sum, Bostock will join Romer v. Evans, Lawrence v. Texas, United States v. Windsor, and Obergefell v. Hodges in the canon of LGBT rights decisions.  There is no other minority group that has had such an unmitigated record of success at the Supreme Court.  Bostock, as a statutory decision, differs from Justice Kennedy’s constitutional handiwork in those other cases in important ways.  Nonetheless, it will advance the perception that history and justice, writ large, are on the side of LGBT equality.