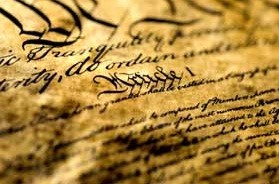 By Adam Winkler, a professor at the UCLA School of Law, and author of Gunfight: The Battle over the Right to Bear Arms in America. This post is part of an ACSblog Constitution Day Symposium.

Over the past three decades, conservative legal commentators have promoted a narrative about our Constitution that puts our hallowed text at odds with the goals of liberals. The Constitution, this story goes, is a profoundly conservative document whose words and principles tilt favorably towards the policy goals of today’s Republican Party: Small government. Law and order. Hostile to gay rights. Opposed to campaign finance law and affirmative action. Favoring nearly unbridled executive power in matters of war and foreign policy. If only jurists stuck to history – by interpreting the text by way of original intent or, alternatively, original meaning, rather than the living constitutionalism favored by Warren Court liberals – we would see the Constitution in its true light.

There’s just one problem with this story. It’s not true.

The Constitution was designed by the Framers to be a radically progressive document. The founding generation was comprised of revolutionaries, people who sought to make a new system of government that broadened rights rather than limited them. Their handiwork was itself thoroughly reformed by another group of progressives: the radical Republicans who added the Reconstruction Amendments. Over and over again, the Constitution has been revised by people inspired by liberal ideas, from the populists who sought the direct elections of senators to woman rights proponents who fought for the right to vote. Taken as a whole, the Constitution is anything but a conservative document. And while its words and principles don’t favor any political party, many of its core ideas support the policy goals of modern-day liberals.

Take, for instance, the argument that the Constitution favors small government. It is undoubtedly true that the framers wanted to circumscribe the power of government; that’s why we have the separation of powers, federalism, and a Bill of Rights. Yet often ignored is that the Framers crafted the Constitution to expand the powers of government so that Congress could effectively solve national problems. The document the Constitution replaced – the Articles of Confederation – hobbled government too much and the men who met in Philadelphia sought to rectify that error.

While the federal government is indeed one of limited powers, as it should be, when acting pursuant to an enumerated power, federal authority is plenary. Some critics of the modern Supreme Court say Congress has assumed a much broader power under the Commerce Clause than originally intended because of misguided interpretations of the Supreme Court. Yet what has grown is not so much the formal power as the amount of commerce among the several states. The framers didn’t envision Congress’s current authority – because they couldn’t have imagined the current national economy.

Nor is the document favorable to the law and order views that have animated so much of the conservative backlash against the Warren Court’s criminal justice rulings. Look at the Bill of Rights. Almost all of its provisions are protections for accused criminals. The Constitution was designed to make it hard to convict someone of a crime, not make it easy. And while the drafters of the 14th Amendment never thought about how its words would apply to questions of gay rights, the text makes no distinctions on the basis of sexual orientation and demands equal protection of the laws and due process for everyone. Affirmative action? No Congress has adopted more racial preferences than the Congress that proposed the 14th Amendment for ratification.

One could go on and on. The basic point remains the same. Our Constitution is deeply imbued with liberal values. We don’t need a living Constitution to advance the principles of equal citizenship. All we need is to stay true to our Constitution’s text and the bold, progressive principles it embodies.