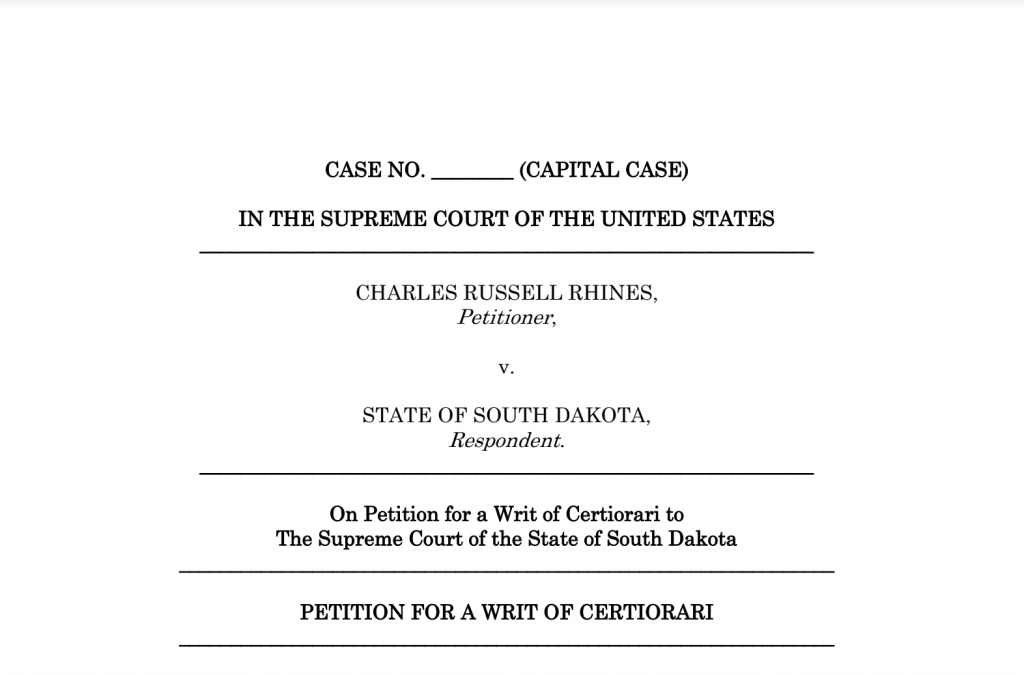 “Our law punishes people for what they do, not who they are.” Chief Justice John Roberts articulated this core constitutional principle last year in Buck v. Davis, a case that reversed the death sentence of an African-American man because a psychologist told the jury that he was more dangerous because he was black.

Just as the judiciary has a responsibility to address when racial prejudices poison jury deliberations, it must also act when challenged with the prospect of anti-gay bias in a capital murder trial.

Next month, the Supreme Court is being asked to accept a case in which Charles Rhines, a gay man in South Dakota convicted of murder in 1993, received the death penalty after deliberations included statements such as “If he’s gay we’d be sending him where he wants to go if we voted for [life in prison].”

Before being selected, the jurors were asked if they had any anti-gay prejudices that would prevent them from deciding Mr. Rhines’s case fairly. They said they could be impartial, but this turned out to be false.

During Mr. Rhines’s trial, the jurors heard that he had sexual relationships with other men, and later sent a note to the judge during their deliberations, showing that their decision-making was impacted by Mr. Rhines’s sexual orientation.

The note asked whether Mr. Rhines would be able to “mix with the general inmate population;” “create a group of followers or admirers;” “brag about his crime to other inmates, especially new and/or young men jailed for lesser crimes;” whether he would be “jailed alone or … have a cellmate;” or “marry or have conjugal visits.” Eight hours after the judge refused to answer these questions or address the anti-gay bias they revealed, the jury sentenced Mr. Rhines to death.

New evidence strengthens the claim that Mr. Rhines’s sentence was improperly swayed by anti-gay prejudice, clearly violating his Sixth and Fourteenth Amendment rights against bias and to due process respectively. In a signed statement, one juror explained that the jury “knew that he was a homosexual and thought that he shouldn’t be able to spend his life with men in prison.” A second juror remembered another juror saying, “If he’s gay we’d be sending him where he wants to go if we voted for [life in prison]. A third juror was clear that “[t]here was lots of discussion of homosexuality. There was a lot of disgust.”

Prejudice based on sexual orientation is long-standing and deeply rooted in American life, as is prejudice based on race. Given our country’s history, it is imperative that we continue to work to eliminate discrimination of all kinds from our criminal justice system.

In the Supreme Court’s 2017 decision addressing racial bias in Peña-Rodriguez v. Colorado, Justice Anthony Kennedy explained that this result “ensure[d] that our legal system remains capable of coming ever closer to the promise of equal treatment under the law.”

In this case, a juror’s desire to prevent Mr. Rhines from having sex with other men cannot stand as a deciding factor for sentencing him to death.

Mr. Rhines must be punished for his crime, and the Supreme Court now has an opportunity to review his sentence with clear eyes.

*Lorenc is the Executive Vice President of the Foundation for Economic Education (FEE.org). He chairs the boards of directors of America’s Future Foundation and the Coalition to Reduce Spending.