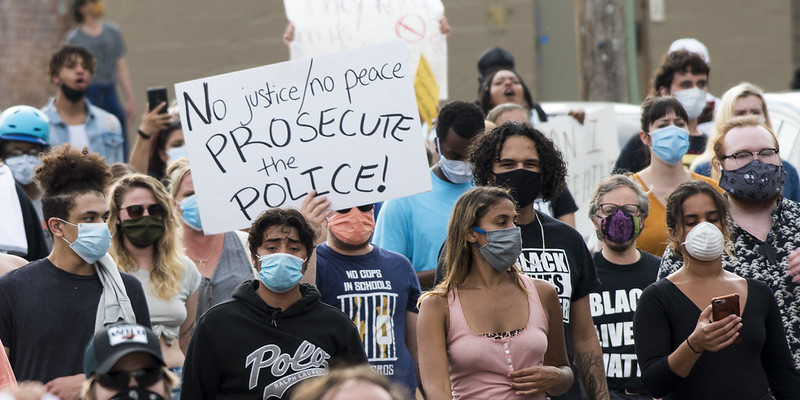 This commentary was cross-published at Just Security.

On Sunday, President Donald Trump tweeted, “The United States of America will be designating ANTIFA as a Terrorist Organization.”  Attorney General William Barr followed the tweet with a statement committing to use the dozens of regional FBI-led Joint Terrorism Task Forces (JTTFs) against “violent radical elements,” which he reiterated on the president’s call with governors on Monday.  Much of the legal commentary that has followed focuses on the lack of presidential authority to designate Antifa, a loose network of anti-racist and anti-authoritarian protestors, as a terrorist organization under existing law.  (See examples here and here).

Such analyses, though correct, do not fully capture two important points:  first, terrorism frameworks for responding to a problem can have important legal, political, and cultural implications regardless of the lack of formal designation authority; and second, many on the left have irresponsibly advocated expanding such frameworks in recent years, despite concerns expressed by civil rights groups and communities of color about such an expansion.

Read sensibly, existing legal authorities do not permit the designation of Antifa as a terrorist group under either of the two primary legal processes available: the State Department’s process for designating foreign terrorist organizations and the Treasury Department’s listing of terrorists under Executive Order 13224, pursuant to the International Emergency Economic Powers Act.

Using the first process, the Secretary of State can designate foreign organizations that engage in terrorist activity threatening U.S. national security or U.S. nationals under Section 219 of the Immigration and Nationality Act.  One of the most important legal consequences is that individuals are prohibited from providing material support to designated organizations, regardless of their intent and even if their support consists of speech.

Under the second process, as modified by a Trump executive order from September, the Treasury Department can block the U.S. property and interests of foreign persons determined by the Secretary of State to have committed, or “pose a significant risk of committing,” acts of terrorism that threaten U.S. national security, as well as the property and interests of (foreign or U.S.) persons determined by the Treasury Department to have materially assisted acts of terrorism.  This executive order relies primarily on the International Emergency Economic Powers Act, which is limited to responding to “any unusual and extraordinary threat, which has its source in whole or substantial part outside the United States.”

Despite the broad sweep of each of these legal regimes, and the fact that both have been applied to U.S. persons, it would be a stretch to target Antifa or Antifa-affiliated individuals through such authorities:  the first is limited to foreign terrorist organizations and the second stems from a statutory power restricted to extraordinary threats stemming in “whole or substantial part” outside the United States.  Antifa is not an organization nor presents a threat emanating substantially from outside the United States, even if individuals loosely claiming that identity sometimes engage in acts of violence or have international counterparts.

Other legal and political consequences

Nonetheless, the invocation of “terrorism” to respond to Antifa—and those protesting police violence more generally—has real consequences even if it does not create new legal powers.  For instance, Attorney General Barr’s call to use the existing JTTFs to target Antifa invites further use of structures that civil liberties groups and some cities have long opposed for conducting overbroad investigations of political speech, targeting Muslims and people of color, and undermining local oversight of policing.

The FBI already operates under guidelines that authorize far-reaching surveillance.  For instance, it has the authority to conduct “assessments” of potential criminal activity—including the use of secret informants—with “no particular factual predication.”  While the rules prohibit investigations based “solely” on the exercise of First Amendment rights, that limitation doesn’t prevent investigations of political activities so long as agents assert they’re acting to assess potential crimes.  A 2010 DOJ Inspector General review concluded that the FBI had, in fact, investigated anti-war and other activists without a sufficient factual basis and improperly classified lawful protest activities as terrorism.  Recent FBI threat assessments of “black identity extremists,” terrorism investigations of anti-racist protestors they identify as Antifa, and JTTF surveillance of the indigenous-led oil pipeline protest movement have amplified these concerns.

But beyond JTTF or FBI activities, the invocation of terrorism signals to state actors and ordinary people that police protestors are enemies of the state against whom extraordinary violence is acceptable. As press reports noted, Rep. Matt Gaetz tweeted: “Now that we clearly see Antifa as terrorists, can we hunt them down like we do those in the Middle East?”  Sen. Tom Cotton stated, “[L]et’s see how tough these Antifa terrorists are when they’re facing off with the 101st Airborne Division.” With police all over the country armed to the teeth with armored vehicles, riot gear, and grenade launchers that belong on battlefields, it doesn’t take deployment of the U.S. military to unleash military lethality on communities.

Once again, the risks of domestic terrorism expansion

The sad irony in all this is that, over the past two years, some on the left have vocally supported an expansion of domestic terrorism frameworks.  Some of the loudest calls for the creation of a new federal domestic terrorism law, for instance, have come from former national security officials who served in the Obama administration, while leading Democrats like Rep. Adam Schiff have introduced bills to create new federal terrorism crimes.  While long-overdue concern over white supremacist violence has prompted these proposals, such calls have neglected the many concerns that civil rights groups like the Leadership Conference on Civil & Human Rights or the Brennan Center for Justice have expressed over expanding terrorism frameworks.  (I have likewise argued against “ratcheting up” the terrorism criminal law regime, in legal scholarship, op-eds, and a written submission to a Senate committee assessing the domestic terrorism response).

Much of the civil rights opposition to expanding terrorism frameworks is rooted in the view that anti-terrorism activities—like law enforcement activities in general—especially target people in communities of color and others who challenge existing racial and socioeconomic power structures.  There is ample historical support for such concerns, based both on post-9/11 U.S. responses to terrorism and on the much longer history of domestic national security enforcement.  And contemporary examples confirm that powerful economic interests promote such policing: as one example, the oil and gas industry and its congressional supporters—including some sponsors of domestic terrorism bills—have urged the Trump administration to launch “anti-terrorism” investigations against protestors who disrupt oil pipelines.

In advocating for new federal domestic terrorism laws, some Democrats remarkably seem to believe that FBI agents, DOJ officials, and U.S. attorneys can generally be trusted with expanded powers—even when the head of the Justice Department is Jeff Sessions or Bill Barr.  The deeper problem seems to be the belief that anti-terrorism activities were generally fine during the Obama administration, and that only the Trump administration’s bad faith misuse of legal authorities—as in attempted Antifa designations—raises concern.

That belief is profoundly misguided.  If the events of recent weeks demonstrate anything, it is that many U.S. law enforcement institutions and officials see black and brown people as dangerous and are willing to deploy exceptional violence in response to them (or to others who seek to support them).  While those on the left may now oppose the administration’s calls to treat Antifa activists and others related to the protests as terrorists, some have long supported the expansion of punitive criminal and national security frameworks that make possible such treatment in the first place.  Rolling back those frameworks is the real need, not merely pointing out that Antifa can’t be formally designated.