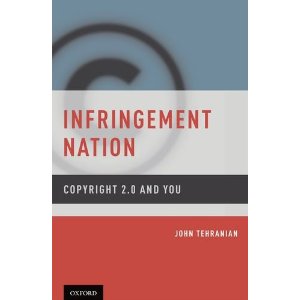 By John Tehranian, the Irwin R. Buchalter Professor of Law at Southwestern Law School and the Biederman Entertainment and Media Law Institute in Los Angeles, California, and a founding partner of One LLP.

Shortly after taking office in 2009, President Barack Obama announced that he would end the use of Guantanamo Bay as a detention camp for enemy combatants in the war on terrorism.  Although it appears increasingly unlikely that the President will achieve this goal any time in the near future, the eventual closing of the facility would potentially do away with a number of controversial policies.  Of those practices, one of the more unusual was the military’s arguably infringing use of music on the prisoners. The soundtrack to Guantanamo Bay, it turns out, was replete with copyrighted songs meant to addle and unnerve, especially on repeat. And, apparently, the government lacked an appropriate license to publicly perform these songs.

As a preliminary matter, the playlist at Guantanamo — at least during the Bush years — was, according to press reports, filled with curious choices. For example, it included Fuck Your God — a particularly bizarre selection considering the Bush Administration’s religiosity and the federal government’s position, through the FCC, on the use of indecent language in other contexts. Guantanamo Bay’s Top Ten List — the songs most frequently played to interrogate prisoners — featured a perverse smorgasbord of heavy metal, children’s music, and (seemingly) patriotic stadium rock:

Thankfully, the Cure’s Killing an Arab (no matter what its existentialist, Camusian roots) was not on the list.

The music policy is, of course, not entirely new. In 1989, General Manuel Noriega, a reputed opera lover, was holed up in a Papal nunciature in Panama City, seeking refuge with the Vatican after American forces descended on his country. In response, American military officials bombard him incessantly with loud rock and pop, including such songs as Nowhere to Run and Smuggler’s Blues. During the infamous stand-off with the Branch Davidians in Waco, Texas in 1993, the ATF and FBI famously blared heavily distorted music and recordings of rabbits being slaughtered. The origins may go even further back than 1989. One military official, retired United States Air Force Lieutenant Colonel Dan Kuehl, located the policy’s spiritual genesis in the Bible: “Joshua’s army used horns to strike fear into the hearts of the people of Jericho. His men might not have been able to break down literal walls with their trumpets, but the noise eroded the enemy’s courage,” he commented.

Politics aside and whatever its origins, the government’s music policy in Guantanamo raised a key copyright issue: It appeared that the government was not paying the appropriate public performance licenses needed to play the music. But, the response from artists was mixed. James Hetfield of Metallica appeared to condone the practice, though he did mention that the government had neither asked his permission nor paid him royalties. Ironically, Metallica has led the fight against unauthorized downloading of its music on the Internet. But speaking about the use of his music by the United States government in Fallujah, Hetfield mused, “If the Iraqis aren't used to freedom, then I'm glad to be part of their exposure.”

Not everyone was so enthusiastic, however. As Trent Reznor of Nine Inch Nails wrote, “It's difficult for me to imagine anything more profoundly insulting, demeaning and enraging than discovering music you've put your heart and soul into creating has been used for purposes of torture.” Reznor also threatened legal action: “If there are any legal options that can be realistically taken they will be aggressively pursued, with any potential monetary gains donated to human rights charities.” However, it appears that Reznor never followed up on this threat. In contraposition to Metallica, Reznor has served as a powerful voice opposing the RIAA lawsuits against unauthorized Internet downloading.

While a few individual artists have raised concerns about the apparent infringement, the industry itself has remained relatively silent. Although the RIAA appears to have no qualms about suing children and grandmothers for engaging in peer-to-peer file sharing, it does not seem as enthusiastic about pursuing infringement charges against the federal government, despite the brazen unauthorized public performance of the songs.

Admittedly, the infringement issue does raise some complexities. The most immediate question that comes to mind is whether and how U.S. copyright law might apply in Guantanamo in the first place. After all, it is an axiomatic principal of American copyright law that it has no extraterritorial application. And, as the Bush Administration maintained in constitutional challenges to its Guantanamo detention policy, the territory was not considered United States soil in any sense of the word. Specifically, the government claimed that it did not exert sovereignty over Guantanamo Bay and, therefore, United States law did not apply there. Ultimately, however, the Supreme Court rejected this argument in Boumediene v. Bush, finding that the United States had exerted de facto sovereignty through its “complete and uninterrupted” exercise of “absolute and indefinite” control over Guantanamo for almost a century.

Arguably, the federal Copyright Act applies in any territory over which the United States exerts sovereignty. However, to avoid any issue of ambiguity, most United States territories have an express statute that enables application of federal copyright laws. For example, the Copyright Act applies in the Panama Canal Zone through operation of section 391 of the Panama Canal Code, which provides that “The patent, trade-mark, and copyright laws of the United States shall have the same force and effect in the Canal Zone as in continental United States, and the district court is given the same jurisdiction in actions arising under such laws as is exercised by United States district courts.” Guantanamo Bay does not appear to have such a provision in place. Thus, post-Boumediene, there is still some question about the application of American copyright protection in Guantanamo.

The lack of action by composers and record labels has effectively granted the federal government unfettered rights to take the works of various recording artists and cast them in unfamiliar lights and contexts, thereby lending some of these compositions meanings entirely at odds with the intentions of their authors. Consider Bruce Springsteen’s Born in the U.S.A. Through its bleak portrait of a Vietnam veteran forgotten by his own country, the song presents a poignant critique of societal inequities and our tragic failure to properly honor the men and women of the armed forces for their sacrifices. Played at Guantanamo Bay, however, the song takes on an entirely different significance — at least to its intended audience of soldiers and detainees. With the imprimatur of DJ Uncle Sam, the song’s seemingly jingoistic, anthemic chorus takes center-stage. In the process, the tune transforms into a patriotic paean rather than a biting attack on the false promises of the American dream and it serves as an effective aural device to demarcate the insider (American/non-terrorist)-outsider (non-American/terrorist) divide separating the soldiers and detainees. Indeed, a central distinction between detainees taken to Guantanamo Bay and held indefinitely without charges and those brought to the United States and entitled to full due process rights, at least under Hamdi v. Rumsfeld, was based on a detainee’s citizenship/birth status. If you were, indeed, lucky enough to be born in the U.S.A., you were entitled to fundamentally different rights than those who were not. Thus, besides setting a patriotic tone and asserting the base’s status as a distinctly American space, the blaring of the song over the Guantanamo loudspeakers also serves as a stark reminder to the detainees of how much the accidents of birth can affects one’s fate.

The unauthorized use of Springsteen’s Born in the U.S.A. allows the government to re-engineer the meaning of the song almost entirely, transforming it from an ironic, caustic critique of our societal failures to a bold assertion of national pride and prowess. And, it is the absence of infringement litigation (for the government alone) that enables this radical semiotic recasting of the work to take place. Indeed, at a time when the recording industry has been suing individual users for millions of dollars for unauthorized peer-to-peer downloading — an effort supported by the federal government with legislation that has provided heightened statutory damages and increased criminal enforcement of copyright laws — the recording industry has remained quiet about the federal government’s use of copyrighted recordings at Guantanamo Bay. Meanwhile, the federal government has shown no compunction about making such uses, regardless of the potential infringement.