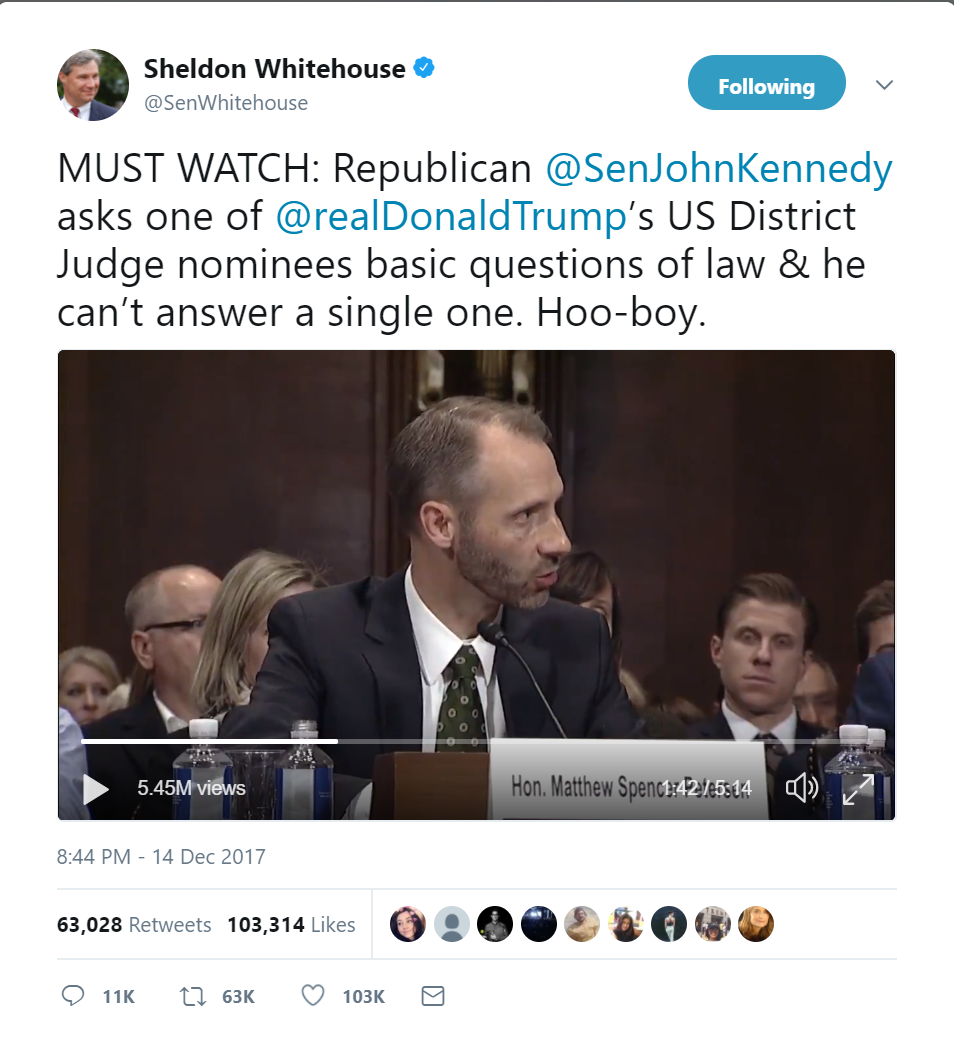 Unbelievable and unprecedented fail to describe Senator John Kennedy’s (R-LA) questions and answers from one Trump judicial nominee to the U.S. District Court for the District of Columbia during a Dec. 14th confirmation hearing.

"Have you ever tried a jury trial?" asked Senator Kennedy.

"I have not," Petersen said.

It is not surprising that video of this astonishing exchange went viral.

The courts are vitally important on issues that affect all our lives. One justice has made the difference on a range of issues from marriage equality, a presidential election, and reproductive rights.

And yet, we have a president who regularly denigrates the judiciary and individual judges.

We also have a Senate Majority Leader and Judiciary Committee Chair who have been rushing through judicial nominees by removing important checks and reinforcements of the Senate’s constitutional advice and consent role.

We face a staggering number of judicial vacancies. There now are 155 current and future known vacancies which represent nearly 20 percent of the judiciary.

This vacancy figure is the product of a plan by the Senate Majority Leader. He slowed down the judicial confirmation process to a near halt over the last two years of the Obama Administration, holding open not only the Supreme Court seat that should have gone to Chief Judge Merrick Garland, but also more than 100 lower court vacancies.

On top of this plan, we see a recent proposal by the founder of the Federalist Society, Steven Calabresi, who suggests Congress dramatically and immediately expand the number of lifetime judgeships for the Trump Administration to fill.

The point of the proposal, Calabresi admits, is to reverse the judicial legacy of President Obama. It is worth noting that Obama is the only recent president who did not have additional judgeships added during his tenure due to Republican efforts to block any consideration of such ideas.

And yet, the pace of confirmations this year has been rapid. To date, the Senate has confirmed 19 lifetime judicial appointments – one to the Supreme Court, nine to the Circuit Court of Appeals. And more confirmation votes have been scheduled. By the end of President Obama’s first year in in office, the Senate had only confirmed 13 judges, including one to the Supreme Court and only three to the Circuit Courts.

This Administration has been extremely aggressive in putting forward nominations, already nominating 59 individuals to these lifetime positions. In many cases, they have often done so without consultation with the home-state Senators which defies the longstanding practice.

Some Senators have withheld blue slips due to this lack of consultation. But two weeks ago, Senate Judiciary Committee Chairman Grassley scheduled a hearing for nominees without support from their home-state Senators, thereby making himself the sole determiner of if and when home-state Senators will have their blue slips honored.

All of these important constitutional and procedural norms are being dismantled while the White House nominates extremely troubling nominees. We see nominees who lack legal experience, who lack experience in the jurisdiction which they have been nominated, who have extremely strong ideological backgrounds, who have omitted important information from their Senate Judiciary Committee Questionnaires, and have made deeply troubling public statements in some cases as bloggers.

Earlier this month, the Senate Minority sent a message about this troubling state of the judicial nomination process by leaving the judiciary markup so early that they prevented the majority from having a quorum to hold a vote on the nominees. Yesterday, Senator Grassley asked the White House to reconsider two of their nominations, Brett Talley and Jeff Mateer, who he said, “should not proceed.” The White House responded to these concerns saying these nominees “will not be moving forward."

It’s time that we all demand better for our federal judiciary. We must start with having a good process that allows for the thorough vetting of judicial nominees who, if confirmed, would serve for life.