At #HypocrisyHearing, Grassley Shows He Can’t Stop Breaking His Word on Blue Slips 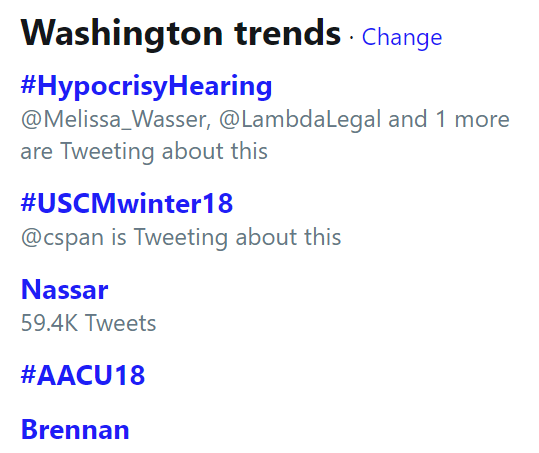 by Christopher Kang, ACS Board member and Former Deputy Counsel to President Obama

The Senate runs on trust.

Senator Patrick Leahy, as the Senate’s most senior member, knows this better than anyone. So last June, I took heart when he said, with respect to Judiciary Committee Chairman Chuck Grassley and blue slips on judicial nominations:

“He told me he was going to follow the same procedures as chairman. And I take him at his word.... I’ve known him for over 30 years. He’s never broken his word to me.”

Last October, Senator Leahy reiterated, “Chairman Grassley has told me he will respect the blue slip tradition, just as I did. I trust him to keep his word.”

“For nearly a century, the chairman of the Senate Judiciary Committee has brought nominees up for committee consideration only after both home-state senators have signed and returned what’s known as a “blue slip.” This tradition is designed to encourage outstanding nominees and consensus between the White House and home-state senators. Over the years, Judiciary Committee chairs of both parties have upheld a blue-slip process, including Sen. Patrick Leahy of Vermont, my immediate predecessor in chairing the committee, who steadfastly honored the tradition even as some in his own party called for its demise. I appreciate the value of the blue-slip process and also intend to honor it.”

And while Chairman Grassley did enforce blue slips during the Obama Administration—preventing 9 Obama judicial nominees from receiving a hearing—last November, he broke his word.

He held a hearing for Minnesota Supreme Court Justice David Stras, even though both home-state Senators had not signed and returned their blue slips—the tradition he described in his op-ed.

Perhaps a little chastened because he had given his word that he would respect blue slips, Chairman Grassley announced his reversal in the Senate’s closing moments before it recessed for Thanksgiving, hours after the last vote had been called.

And he tried to cover his broken promises with a new blue slip policy: “I won’t allow senators to prevent a Committee hearing for political or ideological reasons” but if a colleague “was not adequately consulted by the White House, [that] would be a legitimate reason for withholding a blue slip.” (emphasis added)

Now, he has broken this word, too.

Last Friday, just hours before the government shut down, Chairman Grassley announced that he would hold a hearing for Michael Brennan for the U.S. Court of Appeals for the Seventh Circuit.

He gave no explanation or defense--merely updating the list of witnesses for today’s hearing on the Committee website—but it has been clear that Senator Baldwin was not adequately consulted about Brennan’s nomination.

As Senator Baldwin has said:

Contrast Trump’s bad faith with how the Obama administration tried to fill this very same vacancy:

But now, he just can’t seem to keep his word on blue slips.

Not his word on the Senate floor.

Not his word to his constituents in his op-ed.

Not his word to his fellow Senator whom he has known since his first day in office nearly 40 years ago.

The judicial confirmation process is broken because the trust has been broken. The Brennan nomination is Chairman Grassley’s last chance to repair that trust and restore the blue slip before it is abolished once and for all.