Please join the ACS Minneapolis-St. Paul Lawyer Chapter for a free CLE to learn about Justice Chutich, her path to the Minnesota Supreme Court, views on trial and appellate practice, and tips for appearing before the Supreme Court. This event is co-sponsored by the MSBA Appellate Practice Section.

Please join us in person! Drinks and refreshments will generously be provided by Taft. 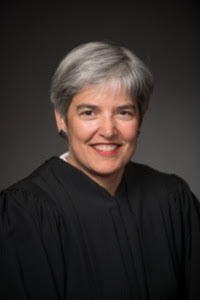 Margaret Chutich is an Associate Justice on the Minnesota Supreme Court, having been appointed by Governor Dayton in March 2016. She was elected to a six-year term in November 2018. Justice Chutich previously served on the Minnesota Court of Appeals from 2012 to 2016.

Before that, she served as Assistant Dean at the Hubert H. Humphrey School of Public Affairs, held various positions at the Minnesota Attorney General’s Office, prosecuted criminal cases as an Assistant United States Attorney for the District of Minnesota, practiced law privately for five years, and clerked for the Honorable Diana E. Murphy in federal court in the District of Minnesota.