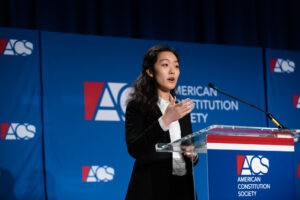 My name is Sahng-Ah Yoo, and I believe ACS’s ability to tap into the leadership of everyday people is what makes ACS one of our progressive movement’s most powerful leaders.

My ACS membership is incredibly important to me. I am a recent law school graduate (now Junior Litigator), ACS Next Generation Leader — and proud ACS member. During my tenure with ACS, I have seen first-hand how ACS champions a generation of diverse leaders who dedicate themselves to advancing and defending democracy, justice, and equality.

ACS is also making a difference by creating a movement of thoughtful progressives. We cannot battle hatred and ignorance with self-righteousness and bias. We must learn to communicate and convince. And we need to join together to make sure this vital work can continue.

When I think about the leadership that America needs now, I’m reminded of the brave survivors of the Parkland shootings. I remember watching that story unfold in the news and realizing that the country’s horror over the tragedy had turned into inertia and — in certain spaces — even called "fake news." But from this tragedy, I witnessed a group of teens who experienced the tragedy first-hand step up to become the leaders for change that our country needed. These were just kids, people just a little younger than me, who had no formal experience in politics or legislation. And yet, in their pain, they found the inspiration and courage to challenge our country to envision a better future without gun violence.

This is the spirit of what ACS membership means to me. Alone, we may feel insignificant or easily defeated by partisan politics and division. But together, we can ensure that the law remains a force for protecting our democracy and for improving people’s lives.

I am incredibly proud that my name is on that long list of ACS student, lawyer, and advocate leaders who are always ready to fight the good fight for as long as we need to. Will you join me?

Let’s get to work.