If you’re like me right now, you can’t help but keep at least one eye on the election in these final days before the midterms. In which case, you are also probably deeply worried about the midterms and what they could spell for the fate of our democracy. I would be doing a disservice if I didn’t take this moment to underscore the importance of all eligible voters voting. If you’ve already voted or have a plan to vote, make sure friends and family are doing the same. Make sure they are voting their full ballot.

I also want to acknowledge our collective and genuine alarm about this moment of truth for our democracy. We are all watching specific races that will determine who will oversee elections in certain states moving forward, including overseeing the 2024 presidential election. We are, and I don’t think this is overstating it, terrified of having proponents of election subversion in charge of overseeing and certifying election results. This alarm is valid, and it underscores the importance of all of us being engaged and outspoken about the real threat of election subversion in this country and of safeguarding the guardrails of democracy. Democracy is not a given, and it should not be taken for granted.

That said, there is a lot of speculation going around about how the elections will turn out. It’s only that, however, speculation. Nobody knows. And anybody who says they do know how the elections will turn out is doing a disservice to the electoral process. As stressful as the uncertainty can be, it is also a reflection of democracy. We don’t know who will win because voters are still voting. I want to take every opportunity to thank those who also serving as poll workers this election cycle. Still, we are hearing about poll worker shortages in some states, just underscoring how important poll workers and election administrators are to our elections.

Here at ACS, we have been thinking and planning for various election outcomes for several months. I want to note here a few things that we can do and will be doing after the midterms, regardless of the election results:

Ensuring the Senate confirms at least 30 judges during the lame duck. We are committed to our Path to the Bench initiative and to diversifying the federal bench. Our work in identifying and recruiting candidates for federal and state courts will continue no matter what because we know courts matter. Just like state court judges are now on the frontlines of protecting abortion rights, state and federal judge are increasingly on the frontlines of protecting the guardrails of our democracy, including election laws. We saw proponents of the Big Lie turn to the courts in 2020, and our courts held firm in upholding the rule of law. We need to ensure that those sitting on state and federal courts are diverse, qualified judges who are committed to the rule of law and to vindicating our fundamental rights. That’s why we are already calling on the Senate to confirm 30 more judicial nominees during the lame duck. Regardless of how the elections turn out, the Senate must maximize the lame duck session to confirm judges. There can be no excuse not to confirm at least 30 judges before the end of the year.

Help us urge the Senate to Confirm 30 by sharing this graphic on your social media accounts: 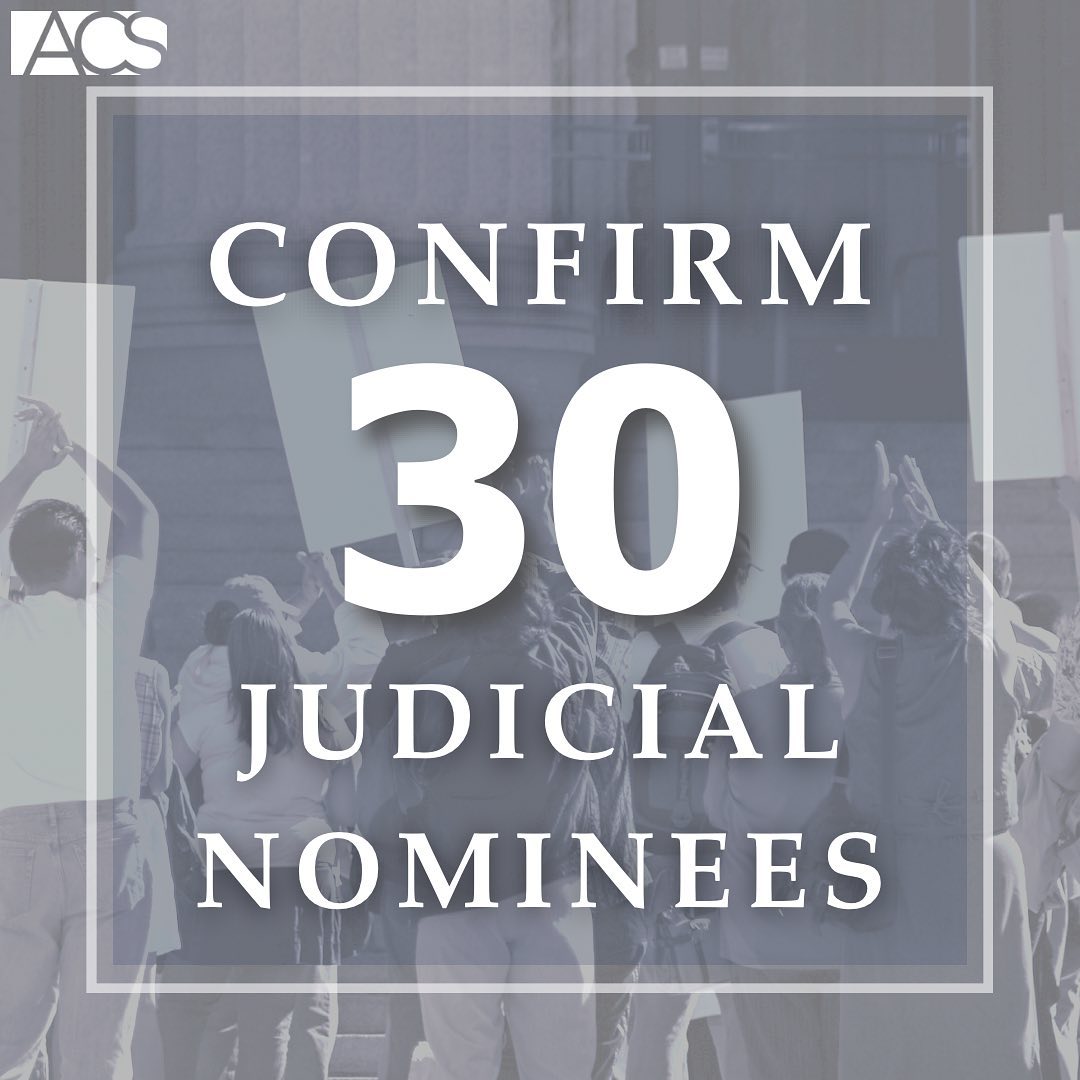 Ongoing recruitment of our network to work for State Attorney General Offices, Secretary of State offices, and other state offices. It is not just the elected official in these offices who is doing the work to safeguard democracy. It is also the staff who are equally committed to the rule of law, to safeguarding democracy, and to protecting our fundamental rights. If you don’t want to run for office, consider working for one of these offices in your state.

Advocating for Supreme Court reform. I’m proud of ACS’s leadership on this issue and our commitment to seeing it through. This week was a glaring reminder of the impact that this Court’s legitimacy crisis has had and is poised to inflict. The Court heard two cases this week regarding affirmative action, and the conservative supermajority left little doubt that they are looking to wipe out the narrow precedent that currently enables colleges and universities to use race as one of many factors in determining admissions. To wipe out affirmative action in higher education is to strike a blow to education access and to our country’s broader pursuit of a genuine multiracial democracy. We need truth, racial healing, and transformation in this country, and yet we have a packed Supreme Court more intent on reversing course and reinforcing white supremacy. We must reform the Supreme Court to restore the legitimacy of this institution.

We will all be watching what happens on Election Day. Nobody knows how these elections will turn out, which is why our top message, our top priority, and our top responsibility must be to vote. In addition to voting, I encourage you to speak out. Do not look away in these final days or in the days after. Do not tune out. We must remain engaged and be ready to champion progress and speak out against subversion. The preservation of democracy rests with We the People. And the work does not stop on Election Day.