The Senate reconvened on Monday, and we are all in on urging Senators to confirm 30 judicial nominees before the end of the year. We all know why courts matter: 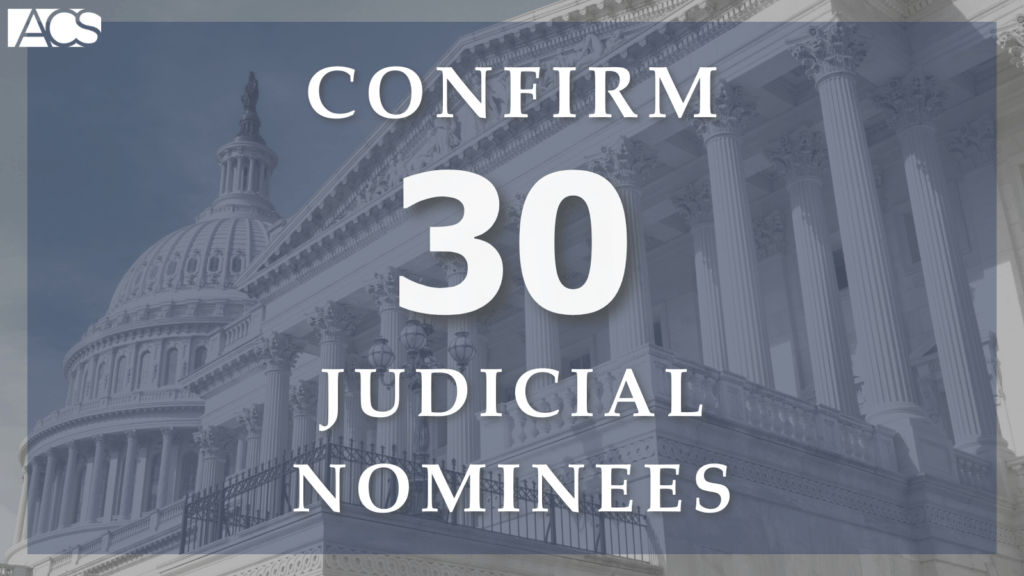 There are 116 current and known future vacancies on the federal courts. On top of those, there are over 175 judges currently eligible or will become eligible to take senior status over the next two years. The Senate needs to get ahead of this now by confirming 30 more judges this year, which would represent just over half of the current backlog.

Right now, 56 judicial nominees are pending before the Senate. This includes 12 circuit court nominees and 44 district court nominees. Twenty-four are awaiting floor votes, with four of these needing discharge petitions from the Judiciary Committee. An additional 18 are waiting to be voted out from the Judiciary Committee, and another 14 are awaiting confirmation hearings before that same committee.

The Senate should not confirm another one or two, declare victory at having exceeded the number of judges confirmed during Trump’s first two years and call it a day. They already underutilized the past three months when they only confirmed two judges in August, eight in September, and zero in October. Now, the Senate will again be dropping the ball if it does not seize upon this lame duck session as a vital opportunity to confirm 30 nominees and help clear the decks for more nominees in 2023.

Ultimately, a failure to maximize this lame duck could reduce the overall number of confirmations possible in President Biden’s first term and reduce the resulting impact in diversifying the federal courts and achieving a judiciary that more reflects the public it serves.

We know the Senate can confirm 30 judicial nominees between now and the end of the year. The question is: will they?