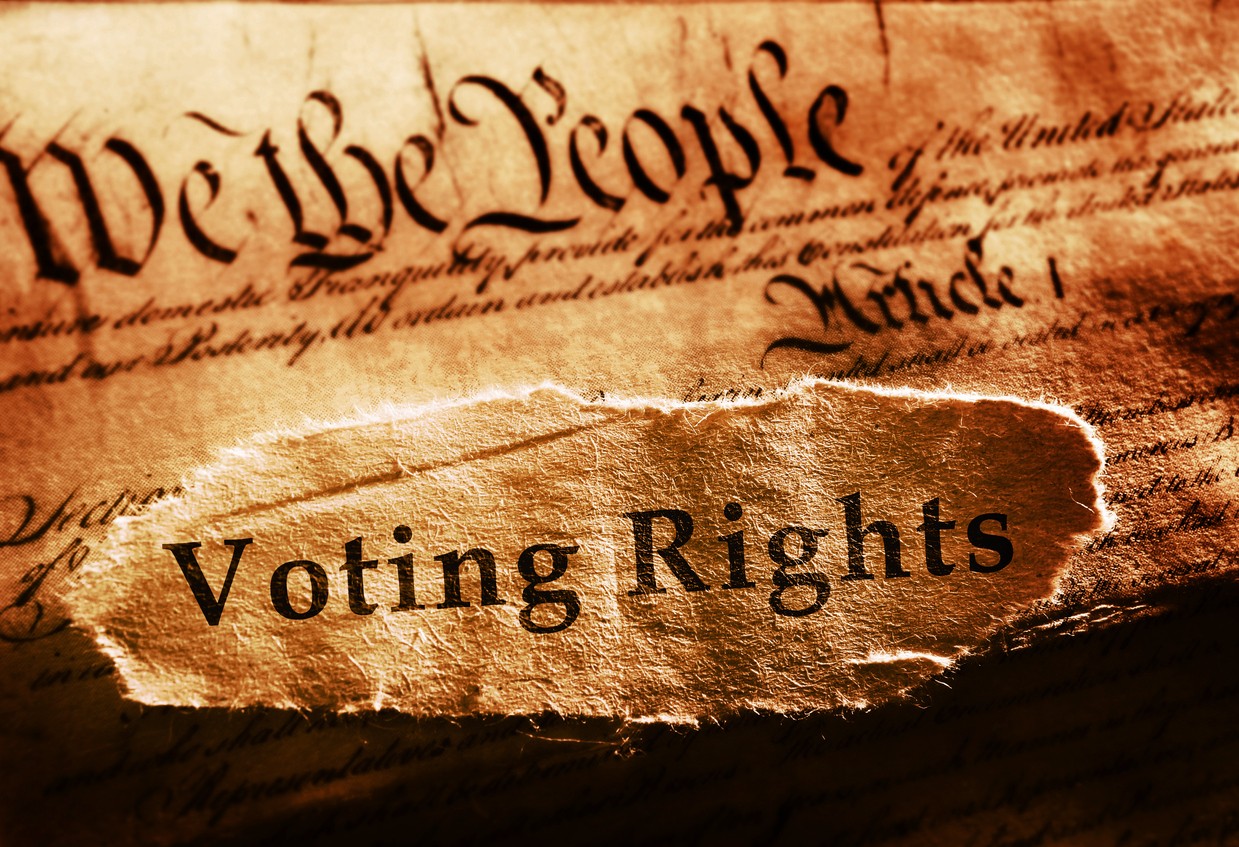 The attack on the United States Capitol on January 6, 2021 may have been the most visible attack on American democracy in decades, but in the 12 months since, a similarly harmful campaign to undermine our elections has been underway across the nation — while receiving significantly less attention.

As state legislatures move to restrict voters’ access to the ballot box, undermine election administrators’ ability to administer free and fair elections, and enable partisan actors to sabotage post-election processes to subvert election results, the need for federal action to counteract these efforts and preserve democracy has never been clearer. Congress has both the opportunity and the responsibility to bolster the foundations of our electoral system by passing the Freedom to Vote: John R. Lewis Act — which combines the previously introduced John R. Lewis Voting Rights Advancement Act (VRAA) and the Freedom to Vote Act (FTVA).

The 2020 election saw the highest turnout in American history, with more than 158 million Americans casting ballots in the presidential contest. Despite the pressures of the COVID-19 pandemic, American voters mobilized in record-breaking numbers to make their voices heard at the ballot box.

After all the ballots were cast and counted (and in many key states, recounted) thanks to the heroic work of election workers and volunteers across the country, the 2020 election was heralded by federal election infrastructure and security experts as the, “most secure in American history.” Of course, that’s not to say that there were no issues; many voters, especially voters of color, still faced hurdles to accessing the ballot.

But rather than celebrating this unprecedented level of civic engagement or addressing the existing barriers that prevented some Americans from voting in 2020, many state legislatures have enacted restrictive laws that limit voters’ access to the ballot. In the 2021 legislative session alone, at least 19 states passed 34 laws that restricted access to voting. Many of those laws target policies that allow voters to cast their ballots by mail, which were essential in 2020 due to the dangers posed by the ongoing COVID-19 pandemic, while others roll back existing policies that have enjoyed bipartisan support for decades.

Perhaps even more concerning, state lawmakers have also enacted 32 laws in 17 states that facilitate election subversion. Election subversion enables partisan actors — including the same legislators who are enacting these bills — to politicize, criminalize or otherwise interfere with election administration to undermine the results of an election.

This wave of anti-voter, anti-democratic legislation moving through the states and the willingness of some political actors to discard democratic values in the pursuit of power underline the need for federal action to preserve core tenets of our democracy – voting rights and election security. The Freedom to Vote: John R. Lewis Act is that necessary action.

So what would this transformative piece of legislation actually do?

To start, this bill would begin to reverse the damage caused by the Supreme Court’s disastrous 2013 decision in Shelby County v. Holder, which drastically undermined the effectiveness of the original Voting Rights Act of 1965 (VRA). Shelby County invalidated the coverage formula that determined which jurisdictions were subject to Section 5 federal preclearance for election law changes.

Almost immediately following the Shelby County decision, several states (predictably) enacted restrictive and discriminatory measures, including restricting opportunities for voter validation, closing polling places and deleting voters from state voter rolls. There have also been cutbacks to early voting periods and restrictions on the right of civic groups to assist citizens in participating fully in the democratic process.

Provisions imported from the VRAA into the combined Freedom to Vote: John R. Lewis Act will restore federal preclearance by adopting a new coverage formula to provide a constantly-updated list of jurisdictions with a history of racial discrimination in voting that would be subject to federal oversight. A new coverage formula would likely cover states like Alabama, California, Florida, Georgia, Louisiana, Mississippi, New York, North Carolina, South Carolina, Texas and Virginia — Red, Blue, and Purple alike.

Last year, the Supreme Court further weakened the VRA by neutering Section 2 in Brnovich v. DNC. The VRAA will return Section 2 to full strength, allowing voters and the Department of Justice to challenge discriminatory voting policies in court. The VRAA also incorporates the Native American Voting Rights Act, which would reduce the unique barriers that Native Americans face to participation in the political process.

Additionally, the bill includes the Freedom to Vote Act’s full suite of reforms to strengthen and protect democracy by establishing national standards for voting access, ensuring fair representation by ending partisan and racial gerrymandering, and increasing transparency in political campaign spending to limit the influence of dark money secret spending.

These FTVA provisions would expand access to voter registration, early in-person voting and vote-by-mail to all voters, regardless of where they live, and would ensure that voter validation requirements do not create insurmountable obstacles to the ballot box. Also included are new protections for voters with disabilities, and restoration of the right to vote in federal elections for Americans with felony convictions who have completed their terms of incarceration.

The FTVA gives voters and advocates new legal tools to challenge burdensome voting laws and strengthens legal standards to make those challenges more likely to succeed, including by establishing an affirmative right to vote and have one’s vote counted.

A new provision in the combined bill prohibits any government official from willfully failing or refusing to tabulate, count and report an eligible person’s vote, or from failing or refusing to certify the aggregate vote counts or the election of a candidate receiving sufficient votes to be elected to office — a key safeguard against election subversion.

The bill’s election security provisions include limitations on the removal of local election officials without cause, enhanced protections from threats and harassment for election officials and volunteers, prohibitions on intentional interference with voters’ protected election activity and restrictions on frivolous voter eligibility challenges. It also requires the use of voter-verifiable paper ballots, expands record keeping and retention requirements for election materials and equipment, and requires states to conduct certified post-election audits.

The redistricting provisions of the FTVA would ensure fair maps by eliminating partisan gerrymandering, setting forth new mandatory criteria for states to use when drawing congressional districts and expanding protections for minority voters under the VRA. And critically, the FTVA would allow federal courts to adjudicate partisan gerrymandering claims, reversing the Supreme Court’s abdication of that responsibility in Rucho v. Common Cause in 2019.

Finally, the FTVA contains three major campaign finance reforms that will improve transparency in our elections. These provisions, which originated in the DISCLOSE Act, Honest Ads Act and Spotlight Act, are important anti-corruption measures that will counteract the influence of dark money secret spending in our elections. Among other things, they would expand existing reporting and disclosure requirements to include paid online political ads, mandate disclosure of major donors to entities engaged in campaign-related advertising and spending, and strengthen the Federal Election Commission’s enforcement process for campaign finance violations.

Some critics have called these measures a “partisan takeover” that would “excessively federalize” our elections. But most of the provisions of this bill enjoy majority support from the public regardless of political affiliation, and many of them have bipartisan origins in red, blue and purple states alike. As for the VRAA provisions — prior iterations of the VRA were enacted with overwhelming bipartisan support, and this time should be no different. Voting rights are not partisan—or at least they shouldn’t be in a democracy that depends upon them for its legitimacy.

Moreover, the Constitution expressly authorizes Congress to pass laws governing the “times, places and manner” of holding federal elections. History is filled with examples of federal election legislation enacted to preserve and expand the right to vote in response to times of democratic crisis: including the VRA, the Uniformed and Overseas Citizens Absentee Voting Act, the National Voter Registration Act of 1993, and the Help America Vote Act of 2002.

This historic legislation has already passed the U.S. House of Representatives, but it remains stalled in the U.S. Senate due to abuse of the filibuster by a minority of Senators. The Senate has changed the filibuster rules frequently over the last several decades, including as recently as last December on matters related to the debt ceiling. No Senate rule or procedure should stand in the way of our democracy. Now is the time to reform the filibuster again to protect our elections.

Other opponents have suggested that rather than pass this critical legislation, Congress should instead focus only on updating the Electoral Count Act (ECA), which regulates the counting of the votes for president and vice president by Congress. To be sure, amending the ECA is a necessity before the next election. And there are other key bills, such as the Protecting Our Democracy Act, which must also pass to further strengthen our democracy. However, these proposals are not a substitute for the critical reforms currently before the Senate in the Freedom to Vote: John R. Lewis Act. Updating the ECA alone will not undo the damage wrought by the Supreme Court or address the litany of voter suppression and election subversion efforts being undertaken by many states—all of these measures are needed to protect our political system and preserve our democracy for generations to come.

Now is the time for federal action to protect and preserve our freedom to vote; Congress must do whatever it takes to pass this bill. Democracy cannot wait.