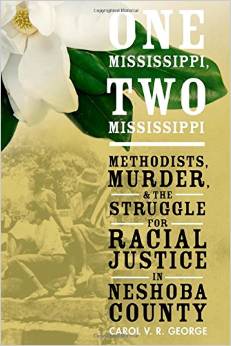 Carol V.R. George is research professor of history at Hobart and William Smith Colleges. Her new book, One Mississippi, Two Mississippi: Methodists, Murder, and the Struggle for Racial Justice in Neshoba County, will be released from Oxford University Press in May 2015.

On June 21, 1964, civil rights activist Andrew Goodman sent a postcard to his parents announcing his safe arrival in Meridian, Mississippi: “This is a wonderful town… The people in this city are wonderful and our reception was very good.”  Little more than twenty-four hours later Goodman was dead. Along with his two colleagues, James Chaney and Mickey Schwerner, Goodman was shot on a dark wilderness road by a group of local Ku Klux Klan members.

Forty-one years later, in June 2005, Edgar Ray Killen was named the architect of the conspiracy that killed these civil rights workers. This delay of over four decades to bring a measure of justice to this case—to the families of the victims as well as to those who had supported the plan to enfranchise black voters. It was powerful testimony about the nature of historical amnesia.

Once the Voting Rights Act of 1965 provided blacks the ballot, Americans generally—not just Mississippians—readjusted their moral compass to focus on issues other than those that once motivated movement activists. All those years, Edgar Ray Killen walked the streets of Neshoba County, Mississippi, confident that the surrounding white community would never bring charges against him, because the case had gone cold, because he was growing old, because it would resurrect bad memories, but also because at some level many believed his crime was not that horrific. Goodman and Schwerner were outsiders; Chaney, too, though he was a black resident of Meridian; and they had come into Neshoba County uninvited, with plans to disrupt the way of life most white Southerners held dear. Some whispered that “it was good they were gone,” and for Killen and his supporters, that sounded like an endorsement of what he had done.

An earlier trial, brought by the federal government in 1967 based on civil rights violations, resulted in having seven participants in the Neshoba Klan murders sent to prison for relatively brief periods of incarceration. At that trial, Killen escaped conviction by the vote of only one juror. Mississippi had never convicted a white person for the murder of a black person or a civil rights activist, so it fell to the federal government to bring the case, and it was not empowered to bring murder charges.

The three men had planned to open the voting rights school at Mt. Zion Methodist Church, a small black church in the Neshoba countryside, and the church and its people provided a living example of justice denied. The congregation was, in a sense, the beating heart of the movement to reopen the case against Killen and his colleagues. Every June since 1965 the church held an anniversary service to commemorate the event. It was at one of these gatherings that a white Neshoba native, Dick Molpus, who was also Mississippi’s Secretary of State, urged the interracial crowd to apologize for what had happened. An apology was not forthcoming, but the controversy generated by the idea contributed to the gathering interest to reopen a case against the Klan participants. Journalist Jerry Mitchell discovered, then published, a sealed letter from former Klan head, Sam Bowers, naming Edgar Ray Killen as the conspirator in chief.  Then, too, the financial success of the local Choctaw Indians had an effect, their entrepreneurial success running a large casino operation an example of what was possible when economic development was uncoupled from white racist behavior. In addition, the appearance of the Hollywood film, “Mississippi Burning,” sensationalized the murders for a large public audience. Members from Mt. Zion Church, the editor of the local newspaper, and staff from the Winter Institute for Racial Reconciliation at the University of Mississippi, all came together in a community group they called the Philadelphia Coalition—named for the small city that was the county seat—to harness their energies to the goal of a new trial.

For several days before the opening of the 2005 trial, Killen was interviewed in his trailer home by documentarian Micki Dickoff; he was remarkably candid before the camera. An unrepentant segregationist, he was arrogant, confident, convinced none of his neighbors who knew him as a Baptist preacher would convict him of any of the charges brought against him. No new evidence had surfaced since the earlier trial in 1967 when he had been acquitted. The prospect for additional evidentiary testimony was earlier aborted when Cecil Price, Neshoba County Deputy Sheriff in 1964, died mysteriously shortly after telling the district attorney he would come forward as a witness. The high power prosecution team consisted of the state’s Attorney General and the local District Attorney; their case constructed around testimony from the 1967 case, a few new witnesses, and the statements of actual and potential jurors with long connections to Preacher Killen. The two defense lawyers, their fees paid anonymously, were locals with less impressive credentials, except for the conviction they shared with Killen that there was no way to connect the man to a crime for which he had once been acquitted. The defense believed nothing had changed since 1967, while the prosecution appealed to the jury to look around at the evidence of change.

The record of the five-day trial, including the process of jury selection, offers firsthand accounts of the values and priorities of the participants; witnesses were mostly residents of Neshoba and the surrounding area. Many of those who came forward had personal ties to Killen, and feared they would lose their jobs and their standing in the community if they spoke or voted against him. Members of the Philadelphia Coalition were excluded by the defense from participating.

There was no single telling moment in the trial. Killen, confined to a wheelchair because of a logging accident, was present every day at the defense table, muttering commentary. It is likely, however, that old evidence read from the 1967 trial record was heard with greater clarity, as, for example, the former police officers who acknowledged that Killen told them right after the murders that the men had been shot and buried in a dam. One of them said he lived with pangs of conscience, determined to become the best police officer he could be.  Carolyn Goodman, Andy’s mother, then ninety years old, humanized her son and spoke movingly of the postcard from him.

While Killen was charged with engineering the conspiracy, no one placed him at the scene of the crime. At the end of testimony, the jury retired briefly, only to report back with a six to six division among its members. Urged by the judge to reconsider overnight, giving weight to the possibility of a manslaughter conviction instead of a murder conviction, they returned the next day with a verdict. Killen was found guilty of manslaughter, and subsequently sentenced to twenty years for each of the three murders, essentially a death sentence.

Following the verdict, a lingering question remained: was Killen’s conviction a sign of positive social change in Mississippi, or could it be, as James Chaney’s brother said, that Killen was the most obvious scapegoat for a community eager to have the stigma of unresolved murders removed? Families of the victims received belated justice, an outcome that Mickey Schwerner’s widow said was not available to the mothers of black sons. The elephant, she said, was still in the room, as the trial separated Killen’s fate from the integrationist goals of the civil rights activists. The results were historic: a Mississippi jury had convicted a white man of conspiracy against civil rights reformers, one of whom was black. But the messengers had been detached from their message: the killers may have been brought to trial, but their goal of an inclusive, egalitarian society seemed as remote as ever.