Trump’s Politicization of the Administrative Judiciary 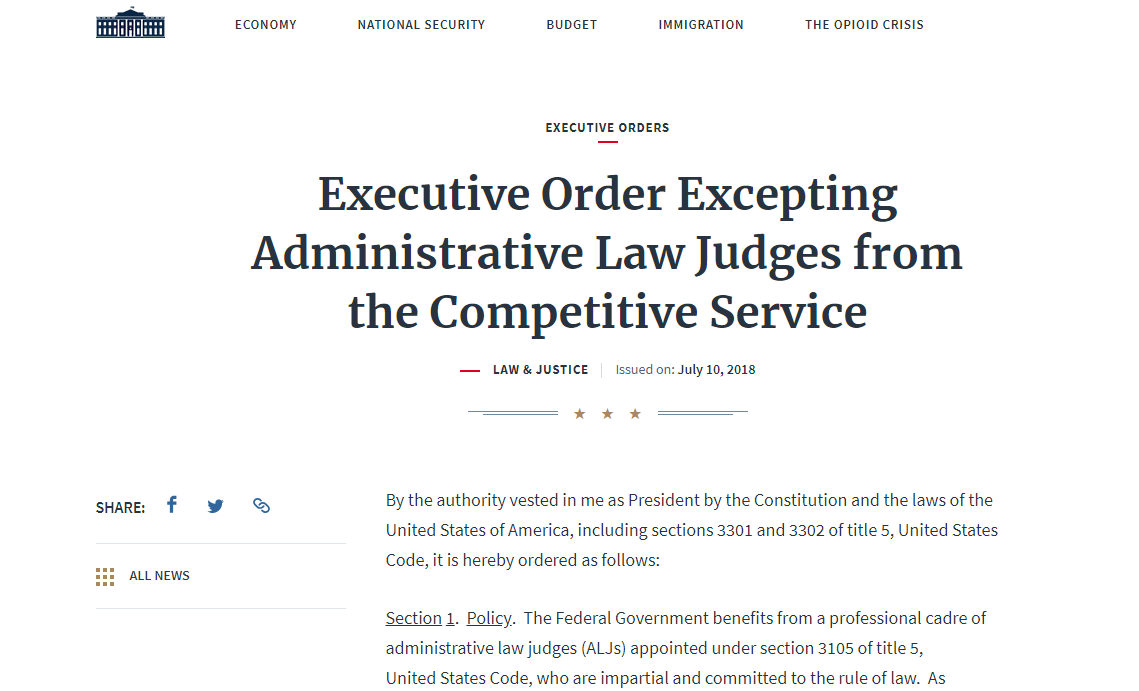 On July 10, while most of the legal/political world was digesting the nomination of Judge Brett Kavanaugh to the Supreme Court, President Trump issued Executive Order 13843, Excepting Administrative Law Judges from the Competitive Service. How administrative law judges (ALJs) are hired is not juicy news, even on a slow news day, so it is not surprising that this EO did not get much coverage. Nevertheless, those closely involved in administrative law immediately saw this as an important and potentially dangerous new step.

For over a half century, the Administrative Procedure Act (APA) has provided for agencies to appoint persons to preside over and make either initial or recommended decisions for agencies in formal adjudication and formal rulemaking. Originally called hearing officers, these persons were renamed in 1978 as administrative law judges. Today there are some 1700 ALJs spread out over 36 different federal agencies, although about 1400 of them are in the Social Security Administration (SSA).  The decisions that ALJs make are important to the people affected by them. For example, when a person applies for but is denied Social Security Disability benefits, the person may appeal that decision and the first tier of review of the agency’s decision will be an ALJ. A Securities and Exchange Commission decision, initially made by an ALJ and recently reviewed in the Supreme Court in Lucia v. SEC, involved a $300,000 fine and a lifetime ban from the investment industry upon a finding that the person had fraudulently misled investors. In light of the importance of decisions made by ALJs and the powers that they exercise in the course of their hearings – supervising discovery; issuing, revoking, or modifying subpoenas; deciding motions; ruling on the admissibility of evidence; administering oaths; hearing and examining witnesses; generally regulating the conduct of the proceeding; and imposing sanctions for contempt or procedural violations – the Supreme Court held in Lucia that ALJs are officers of the United States. Moreover, it has long been thought necessary to ensure the competence and independence of ALJs that they be appointed through a competitive process run by the Office of Personnel Management (OPM), an agency separate from the agency that would hire them, and that once hired, their agency cannot sanction them, reward them, or remove them except for cause as determined by the Merit Systems Protection Board.

President Trump’s EO changes some of this. Going forward (that is, it does not affect current ALJs), ALJs will no longer be hired through the OPM. Instead, the EO authorizes agencies to hire new ALJs in whatever manner the agency desires. In addition, the EO states that the removal of these future ALJs will not be subject to Civil Service Rules and Regulations.

Initial reactions viewed these changes with dismay. Typical was that of the President of the American Bar Association, who wrote to members of the House of Representatives that “the EO has the potential to politicize the appointment process and interfere with the decisional independence of ALJs. Nothing less than the integrity of the administrative judiciary is at issue here.” More measured reflection, however, has tempered this impression. First, whatever the meaning of the EO’s statement that removal of new ALJs will not be subject to Civil Service Rules and Regulations, current and new ALJs will only be able to be removed for cause as determined by the Merit Systems Protection Board. That protection is statutory (5 USC § 7521(a)) and cannot be undone by EO. In other words, the EO makes no change to the grounds for removal or other sanction of ALJs.

With respect to the change in hiring, Kent Barnett of the University of Georgia, while acknowledging the potential of packing an agency’s ALJ corps with those whom it thinks are sympathetic to the current administration’s positions, has noted that there are some positive aspects of the EO. For example, there have been longstanding, bipartisan complaints about OPM’s operation of the competitive process for deciding who can qualify to be an ALJ. It has created inordinate delays in appointing new ALJs and made virtually impossible the appointment of persons with subject matter expertise in the agency’s work. The EO’s change will address these problems. Paul Verkuil, a universally respected expert on the use of ALJs and former Chair of the Administrative Conference of the United States, points out that the EO has mostly positive effects for the SSA ALJs, who constitute the vast majority of all ALJs.

It may be true that the SSA is less likely to be concerned with their ALJs’ ideology, compared to regulatory agencies, inasmuch as ruling on individuals’ social security eligibility simply does not raise the same political temperature as decisions by regulatory agencies. Still, the fear of ideological appointments in the regulatory agencies may be real. Nevertheless, the effect of any such ideological appointments can be overstated. After all, ALJ decisions are initial or recommended decisions; they are not the agency’s final decision unless the agency decides to make them so. Under the APA agencies exercise de novo review of ALJ decisions, and no one doubts that the agencies are themselves ideologically stacked in light of the then current administration’s predilections. Thus, no matter how independent, non-partisan, and unbiased an ALJ might be, the agency retains the power to act in accord with the administration’s ideological leanings. And to the extent that those ideological leanings are not inconsistent with the statute being applied in the case, the result in the case accords with the will of the people in electing that administration. It is the courts that assess whether the agency has stepped over the line by transgressing the statute or ignoring the evidence.

As Professor Barnett concluded, while the EO may have some positive benefits, it also creates opportunities for politicization of what has been an independent administrative judiciary. The benefits could have been obtained in a manner that would have avoided the possibility of politicizing ALJ appointments. And while the effects of such politicization can be exaggerated, a perception of an intent to do away with an independent administrative judiciary could do lasting harm to the public acceptance of administrative adjudication. But then, perhaps that is the point.