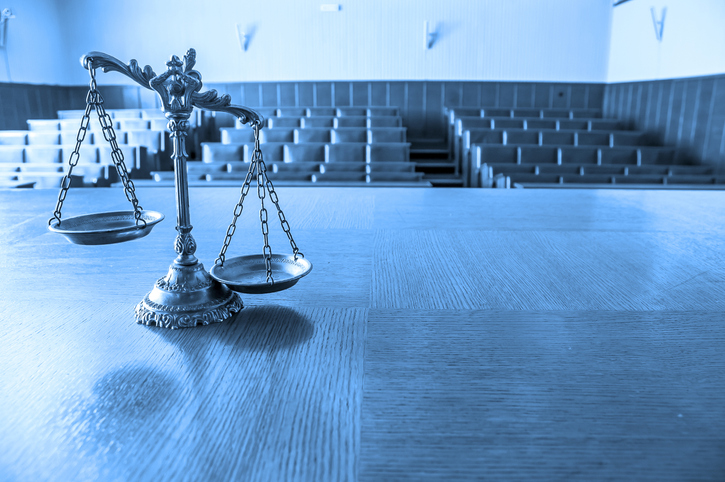 This blog was originally posted on Public Justice.

Here’s the sad truth: Throughout America, corporations and government officials are violating the law, cheating people, discriminating against people, injuring people, even killing people – and they don’t want to be held accountable. They know the courts are the one place they can be held accountable. So they are taking the next predictable, unconstitutional step. They are trying to limit and eliminate the rights to a day in court and a jury trial.

Those rights are protected by the U.S. Constitution and the constitutions of every state. We must preserve them. To demonstrate how important they are, Public Justice annually recognizes and publicizes the work of the trial lawyers who tried or settled the cases that made the greatest contribution to the public interest in the past year by naming them finalists for its nationally- prestigious Trial Lawyer of the Year Award.

This year’s finalists will be honored and the winner will be announced at Public Justice’s Annual Gala & Awards Dinner on Monday, July 29, 2019, onboard the USS Midway Museum in San Diego. Their cases, summarized briefly below in alphabetical order by case name, show why corporations and government officials are attacking your right to a day in court.

Pacific Gas & Electric generates and provides power throughout wide areas of California, but has been polluting the San Francisco Bay in the process. The Ecological Rights Foundation discovered that storm water discharges and dust tracking from at least thirty-one PG&E facilities in northern California contained levels of dioxins and pentachlorophenol (PCP) from utility pole treatments that dramatically exceeded regulatory agency standards, often by a factor of 10,000 or more. The dioxins discharged are known to cause birth defects, immunotoxicity, and harmful impacts on reproductive health, even at extremely low exposure levels. PG&E’s dioxins and PCP releases often went directly into adjacent public waterways and wetlands.

So ERF sued PG&E under the citizen-suit provisions of the federal Resource Conservation and Recovery Act (RCRA) and Clean Water Act (CWA). But the district court held that the Environmental Protection Agency excluded facilities like PG&E’s from regulation under the CWA because they did not constitute industrial activities under the Act. It also found that, under the RCRA’s “anti-duplication” provision, the EPA’s exclusion precluded regulation of PG&E’s water runoff from regulation under the RCRA. For those reasons, it ruled in PG&E’s favor.

On appeal, the Ninth Circuit reversed. It held that the CWA exemption did not automatically preclude regulation under RCRA. As a result, RCRA may now be used to hold corporations accountable for solid waste disposal not previously remedied because of regulatory gaps left by other laws.

After prevailing on appeal, through nine months of intensive settlement negotiations and mediation, ERF’s team won a consent decree requiring PG&E to develop and implement pollution controls at its Northern California service centers. These controls will curb future PCP and dioxin releases from the sites, and ensure that any future releases are below what the law allows.

On April 28, 2013, Kirsten Englund was shot to death by Jeffrey Boyce at a scenic overlook on the Oregon coast. Boyce was a mentally ill man armed with guns he purchased from an online dealer. The dealer sent them to a local pawn shop, where his mother got them for him in an illegal straw purchase (where someone other than the true purchaser provides her or his name, completes the background check, accepts the gun, and hands it off to the true purchaser).

Boyce was able to purchase these guns because the online dealer, J&G Sales, had no systems in place to verify the true purchaser’s identity. Federal and state firearms regulations require a background check on the true purchaser and allow the firearm to be transferred only to that individual. The dealer defendants sought to avoid this responsibility by arguing that neither could be liable for the online straw sales because one entity screened and sold the gun and the other entity did the background check and transferred the gun. This argument, if adopted by courts, would mean that a straw sale is impossible when one dealer supplies another dealer.

Englund’s team, however, defeated that argument, and the case proceeded to trial. On the eve of the start of proceedings, the defendants settled.  The financial settlements totaled $750,000, including a $400,000 payment from Boyce’s mother, the largest monetary settlement from an individual straw purchaser, and the only monetary settlement ever from an online gun dealer. The settlements also included business reforms aimed at reducing online straw purchases. The in-state firearms dealer agreed to stop transferring guns purchased online, and the online retailer agreed to modify its online ordering process, allowing it to better identify the actual purchaser and prevent straw purchases.

On December 19, 2011, a 13-year-old mentally disabled girl – ultimately the plaintiff in this case – was raped by an older male student after leaving her public school to go home. She was supposed to be placed on a school bus to travel to and from school, but instead walked home with her rapist. Incredibly, soon after her rape, the student was subjected to months of bullying by other students.

Evidence in the lawsuit proved the school was supposed to ensure the plaintiff was on a school bus on the day of her rape, but failed to do so. After the plaintiff faced months of bullying in the wake of her rape, the school promised on March 15, 2012, that she would not be unsupervised. Four days later, however, a teacher’s assistant told the plaintiff “I don’t care where you go,” and the plaintiff went to use the bathroom in the girls’ locker room. Four girls then attacked her, slamming her head against a bench and the floor. The attack resulted in brain damage and resultant memory impairment.

The school claimed that the girl was a willing participant in the altercation in the restroom, and further contended that she had fabricated the rape. It maintained this position despite evidence she lacked the cognitive skills necessary to fabricate such a claim, and that the substance of her rape allegations have been consistent over the years.

Despite the defense’s victim-shaming, after four weeks of trial and a full day of deliberation, the jury found the Mount Vernon City School District 99% liable for the plaintiff’s injuries, and one of her classmates 1% liable. She was awarded $8 million for past pain and suffering, and $20 million for future pain and suffering for 60 years. This is reportedly the largest verdict for a single-plaintiff sexual assault case in New York history.

When Justice Lloyd Karmeier was elected to the Illinois Supreme Court in 2005, one of his first actions was to break the deadlock in a case against State Farm, overturning a $1.2 billion verdict in favor of 4.7 million policyholders who were given car repairs with inferior, non-original parts. The legal team representing the policyholders suspected that State Farm had financed Karmeier’s campaign, but State Farm denied this and Justice Karmeier refused to recuse himself.

Even after a 2009 U.S. Supreme Court decision held that large contributions to a judicial campaign coupled with a refusal to recuse could constitute a violation of due process, the Illinois court refused to reconsider its decision. Plaintiff’s counsel, however, renewed their efforts to find evidence that State Farm funded Karmeier’s campaign. Their investigation revealed the company had funneled millions of dollars to the Karmeier campaign through intermediaries like the U.S. Chamber of Commerce, the Illinois Chamber of Commerce, and the Illinois Republican Party.

Using this new evidence, in 2012, counsel filed a new lawsuit alleging that State Farm had participated in a conspiracy to violate the Racketeer Influenced and Corrupt Organizations (RICO) Act by committing mail fraud when it denied in pleadings that it had not funded the campaign directly or indirectly. After six years of litigation, including briefings on more than 100 contested motions and depositions of 68 witnesses (including Chief Justice Karmeier), the plaintiffs’ team won a $250 million settlement days after the trial began, and mere hours before Justice Karmeier was set to testify.

The settlement includes a state-of-the-art distribution process that will pay nearly 1.5 million class members automatically, without the need to submit a claim form. By litigating this case as hard and as long as they did, these lawyers shined a spotlight on, and brought critical attention to, the problem of dark money and corruption in judicial elections.

In the 1980s and 1990s, a building boom by the swine industry resulted in southeastern North Carolina counties being filled with large factory farms, often built without consideration of the rights and needs of families who lived in existing rural communities. The industry had a stranglehold on the state legislature and beat back efforts to increase regulation. As a result, rural areas, including low-income communities of color, suffered for years. They faced noxious fumes from swine waste, bouts of flies, and extraordinarily heavy truck traffic. Massive amounts of contaminants, bacteria and pathogens, ammonia, and other contaminants were released into the environment. The sites used giant gun sprayers to distribute and supposedly dispose of the waste, which caused waste mist to drift into the surrounding neighborhoods.

Research by faculty members of NC State, UNC, Duke and other institutions documented the adverse effects of contaminants on the health and quality of life. Despite this evidence, rural families had difficulty finding local lawyers willing to take on the massive industry.

Mona Lisa Wallace and her law firm, Wallace & Graham, P.A., however, decided to take on the representation of these residents. After five years of scorched-earth litigation in federal court, the trials of the first selected bellwether plaintiffs began in April 2018. The series of trials resulted in unanimous jury verdicts holding the Smithfield Hog Production liable for causing a substantial and unreasonable interference with the plaintiffs’ use and enjoyment of their homes, under a common law claim of private nuisance. Four of the five juries also found liability for punitive damages.

After the third verdict resulted in the largest damages award in North Carolina history, Smithfield issued press releases promising to institute changes to its waste handling practices and implement green energy initiatives. If the company follows through on its new commitments, that should help reduce the impairment of quality of life of nearby community members and help alleviate the public health risks. The company continues to contest the damages verdicts on appeal, where a variety of public interest groups, including Public Justice, have filed amicus briefs in support of the plaintiffs.

These five cases demonstrate the extraordinary power people can have when they exercise their constitutionally-protected rights to a day in court and a jury trial. They can hold the powerful accountable and make sure justice is done.

These cases also show what trial lawyers and our system of justice can do every day: expose the truth and make wrongdoers pay.

That’s why corporations and government officials are trying to use mandatory arbitration, federal preemption, class action bans and abuses, secrecy agreements and orders, expanded immunity doctrines, and other legal barriers to limit and eliminate the rights to a day in court and a jury trial.

We cannot let them succeed. Please share these stories and spread the word.