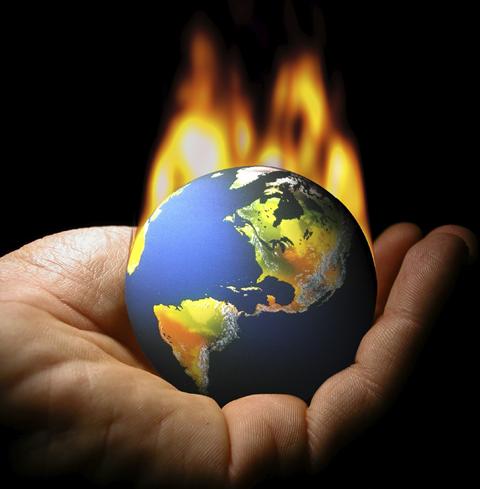 Western states face a daunting manifestation of the climate crisis. Record heat waves - in the triple digits - combined with sustained drought conditions have led to wildfires that burned millions of acres in the west. Not surprisingly, leaders in western states are bringing strong climate action to the UN Climate Change Conference of the Parties (COP 26) that begins this Sunday in Glasgow as they address the present effects of climate change millions are experiencing right now.

Paris, Glasgow, and the U.S.

The Paris Agreement is a 2015 agreement amongst nearly all of the world’s nations to take action to avoid the worst consequences of climate change. Parties to the Agreement pledged to limit global warming to preferably 1.5 degrees Celsius above pre-industrial levels. Every five years countries must submit their Nationally Determined Contributions (NDC) to explain how they are going to participate in global efforts to slash the greenhouse gases that cause temperatures to rise and contribute to climate change.

In the lead-up to COP 26, countries, including the U.S., have been busy developing their NDCs. However, earlier this year a UN Climate Change report indicated the commitments so far are likely insufficient to stay below the 1.5 degrees target. COP 26 represents a critical opportunity to bring the world’s leaders together to pledge deeper cuts to climate pollutants before the clock runs out to limit global temperature rise to 1.5 degrees.

Attention in the second half of 2021 has turned to Congress as it considers passing a strong federal down payment on reducing greenhouse gas emissions. Twenty attorneys general, including the attorneys general of California, New Mexico, Oregon, and Washington, recently urged Congress in a letter to include provisions decarbonizing the power sector, electrifying the transportation sector, and prioritizing climate justice in a budget bill.

While Congress attempts to reach an agreement on climate budget items, attorneys general, especially those from western states, have insisted that the federal government find other ways to cut climate emissions.

Attorneys general have supported federal rules to crack down on vehicle-related emissions as the transportation sector is now the largest sectorial source of greenhouse gas pollution. In July, California Attorney General Rob Bonta and New York Attorney General Letitia James led 22 attorneys general, including those of Colorado, Nevada, New Mexico, Oregon, and Washington, in submitting comments urging the EPA to restore the Golden State’s authority to set its own, stronger greenhouse gas and zero emission vehicle standards. The AGs also urged the EPA to allow other states to adopt California’s vehicle standard as their own. These actions would allow California and other states to adopt standards that cut climate and criteria pollutants.

Two months later, the attorneys general of California and New York rounded up a 13-attorney general coalition (including Oregon and Washington) to send a letter to the National Highway Traffic Safety Administration calling on the agency to reinstate the fee automakers pay for failing to satisfy fleet fuel economy standards. The Trump administration three times disregarded Congress’s instruction to adjust civil penalties to account for inflation, reducing the penalties car companies face for placing vehicles that emit pollutants, including carbon dioxide, on our roads. Reinstating the penalties now would help improve compliance and clean up vehicle fleets.

Perhaps, most importantly, California Attorney General Bonta led 22 attorneys general in September to urge the EPA to promulgate more stringent vehicle emissions standards. As the AGs explained, stronger standards could avoid at least 2,200 million metric tons of carbon dioxide emissions and 2.7 million metric tons of methane emissions and provide between $86 billion to $140 billion total in societal-wide benefits by preventing the worst consequences of the climate crisis.

Improving the energy efficiency of everyday consumer and industrial products represents another opportunity to reduce emissions associated with electricity. California Attorney General Bonta, in September, led the attorneys general of Colorado, Nevada, Oregon, Washington, and other states in supporting, with suggested improvements, the Department of Energy’s (DOE) proposed reforms to its Process Rule. The Process Rule governs how DOE refines energy efficiency standards under its energy efficiency program and DOE used the prior version of the Process Rule in its energy efficiency program that has avoided 2.6 billion tons of carbon dioxide emissions by 2030. Adoption of the recommended modifications to the proposal would unlock future energy savings and emissions reductions by removing obstacles to improving products’ efficiency. Attorneys general have also called for eliminating new product classes for dishwashers and clothes washer and dryer products that currently “allow unlimited energy use” and for strengthened lightbulb standards that could save consumers billions of dollars and the planet millions of metric tons of climate pollutants.

Additionally, attorneys general have also expressed skepticism about further development of fossil fuel resources on federal land without a proper review of a project’s emissions impacts. Earlier this month, Washington Attorney General Bob Ferguson and 10 other attorneys general (including Oregon’s Ellen Rosenblum) pressed the Department of Interior to better analyze the environmental consequences of oil and gas leasing in Alaska’s Coastal Plain.

Western governors and state legislatures have also worked to pass an impressive suite of climate bills this year. In May, Washington state adopted the Climate Commitment Act, which will set limits on greenhouse gas emissions from the state’s largest polluters in line with the state’s statutory requirement to reduce emissions to 95% below 1990 levels by 2050. Additionally, the legislation includes a process that requires the state and local governments to implement additional measures to reduce emissions in overburdened communities, if air quality monitoring reveals that pollution is not decreasing. Lastly, the bill invests in clean energy, clean transportation, and climate justice projects.

In July, Oregon Governor Kate Brown signed two significant pieces of climate legislation into law. Oregon now has one of the most ambitious clean energy mandates in the country - 100% clean energy by 2040. Oregon is also investing in clean transportation by extending electric vehicle purchasing and leasing incentives and requiring utilities to build out electric vehicle charging infrastructure, including earmarking at least half of the funds for underserved communities.

Just last month, California made historic investments in climate action. At the end of the legislative session, the governor signed a budget addendum that provides funding for projects to reduce wildfire risk, over $5 billion in immediate drought response and water resilience, billions for strengthening climate resilience in front line communities, and putting 1,000 zero emission trucks, school buses, and transit buses on California’s roads.

Two thousand twenty-one has been a sobering year in the west and around the world. Western Canada and the United States suffered triple digit heat surges, fueling climate chaos and leveling communities. Both China and Germany saw extreme flooding from rain events, while this is the sixth straight year of above average activity during the Atlantic hurricane season.

It is all the more important that the global community come together in Glasgow this Sunday to chart a path to meet the Paris target of keeping global temperature rise since pre-industrial times to 1.5 degrees Celsius. The Biden administration has advanced a plan to contribute to these efforts by slashing greenhouse gas emissions by at least 50% below 2005 levels by 2030. So far, the U.S. has cut emissions about 13% since 2005 - or about one-quarter of the 50% target.

Even while they are facing climate change as a current event, western leaders, including western state attorneys general, are stepping up to provide the Biden administration the tools it needs to achieve the remaining emissions reductions required. Governors and legislators in the west and elsewhere are adopting their own climate pollution mitigation programs in the power and transportation sectors, and attorneys general are pushing federal agencies to cut carbon electricity emissions and improve energy efficiency. President Biden, thanks at least in part to western climate leadership, can head to COP 26 with a roadmap to a climate-friendly future.

To learn more about this and other climate work of western attorneys general, join the State Impact Center for a webinar with California Attorney General Rob Bonta and Oregon Attorney General Ellen Rosenblum on Friday, October 29 at 5 Eastern/2 Pacific, titled Confronting the Climate Crisis: Western AGs Respond (a video recording of the webinar will be available later). Register for the event here .