The NFL’s New Anti-Protest Policy Has A Large Loophole 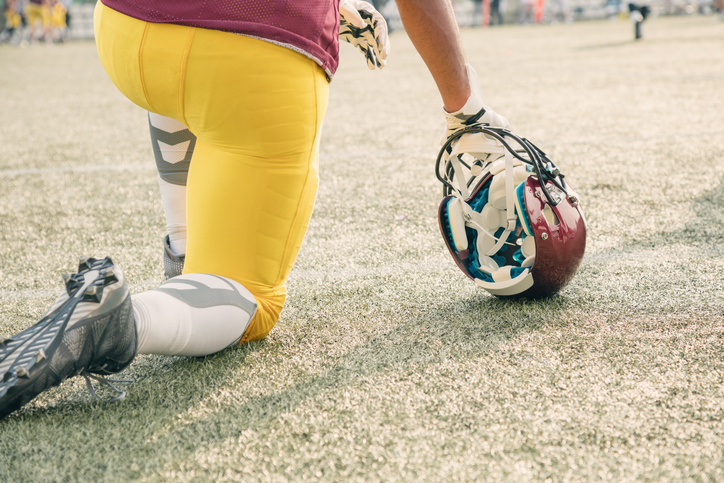 In the 2016-2017 and 2017-2018 National Football League season, dozens of NFL players knelt at games while the national anthem played during pre-game ceremonies. Many of these players were spurred to action by Colin Kaepernick's initial decision, while he played for the San Francisco 49ers, to first sit and then kneel during the national anthem, in order to protest police brutality.

The players’ protests sparked hostile responses from some quarters, led by President Trump, who declared that players who protested should be fired and expelled from the U.S..

In response to the controversy, the NFL adopted a new policy to prevent on-field protests during the anthem, without consulting the players involved or their union, the National Football League Players Association, which objected to the unilateral adoption of this policy. The new policy is concise:

The 32 member clubs of the National Football League have reaffirmed their strong commitment to work alongside our players to strengthen our communities and advance social justice. The unique platform that we have created is unprecedented in its scope, and will provide extraordinary resources in support of programs to promote positive social change in our communities.

The membership also strongly believes that:

1. All team and league personnel on the field shall stand and show respect for the flag and the anthem.

2.The Game Operations Manual will be revised to remove the requirement that all players be on the field for the anthem.

3. Personnel who choose not to stand for the anthem may stay in the locker room or in a similar location off the field until after the anthem has been performed.

4. A club will be fined by the League if its personnel are on the field and do not stand and show respect for the flag and the anthem.

5. Each club may develop its own work rules, consistent with the above principles, regarding its personnel who do not stand and show respect for the flag and the anthem.

6. The commissioner will impose appropriate discipline on league personnel who do not stand and show respect for the flag and the anthem.

This new policy appears to have a loophole large enough to drive an 18-wheeler through it. At the very least, it invites artful protests in response, and even during the pre-game playing of the anthem.

Set aside for the moment the significant legal questions whether this new NFL policy runs afoul of state constitutions’ guarantees of free speech,  whether Trump’s insistence on the NFL’s adopting this policy is the unconstitutional use of state power to coerce private entities to suppress protected speech, and whether public ownership of several stadia in which NFL teams play triggers application of  forum analysis and the sliding scale of First Amendment protection afforded to speakers in different kinds of fora, which might include both fans and NFL players.

Assume that the NFL intends to align “...stand and show respect for the flag and the anthem...” with 36 U.S. Code § 301, which sets out two civilian modes of expressions of respect while the anthem is played: (1)  if the flag is displayed, “face the flag and stand at attention with their right hand over the heart, and men not in uniform, if applicable, should remove their headdress with their right hand and hold it at the left shoulder, the hand being over the heart…”; (2) when the flag isn’t displayed, “all present should face toward the music and act in the same manner they would if the flag were displayed.”

Thence, focus on the plain facial ambiguity of the key language of the NFL policy: “...team and league personnel on the field shall stand and show respect for the flag and the anthem.” (Emphasis added.) This language seems easily to accommodate imaginative on-field protests, rather than to deter them.

A range of hypotheticals readily presents itself if players elect to stay on the field and stand for the anthem.

Endless variations on these expressive examples would appear to comply with the letter of the NFL policy and 36 U.S. Code § 301.

How exactly would the NFL argue that players who engage in these kinds of silent expression are violating the new NFL policy? And, on what basis would the league impose fines on teams whose players elected to express themselves silently while standing at attention, hand on heart, during the anthem and pre-game display of the flag?