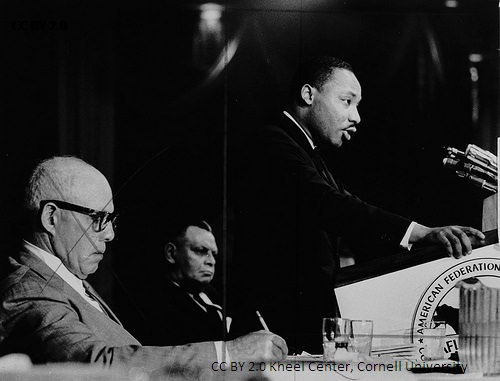 In 1976, when I was in tenth grade, the dreaded “back-to-school” assignment for my American history class was to write an essay about the three most important Americans in our nation’s two hundred-year history. This was, I suppose, our school’s nod to the celebration of the Bicentennial of the Declaration of Independence. I chose Abraham Lincoln, Franklin Delano Roosevelt and Martin Luther King, Jr. It turned out that I was one of two people in my class to include King, the other being the class hippie, whose other two choices were Alan Ginsburg and Jimi Hendrix. My teacher returned the assignment to me the next day and said that I needed to write about someone “serious,” like George Washington, Thomas Jefferson or, and I kid you not, the Rev. Billy Graham. I told my teacher that I would rather write about Rev. King than Rev. Graham, and refused to change my mind. My teacher refused to change her mind as well. I received a D on the assignment because, as my teacher told me, Lincoln and Roosevelt were “genuine” Americans. I suppose it’s important to note here that I grew up and attended public schools in Atlanta, where, at the time, more than a few people still referred to the Civil War as the “War Between the States.” My teacher offered wise counsel: “Lincoln is still not all that popular around here, you know. Let’s not push things in the future.”

The notion that Martin Luther King, Jr. is anything less than one of the most important and consequential figures to grace the planet, not just the nation, in this or any other lifetime, is one that today finds a home only among those unwilling to acknowledge the profound injustice at home and abroad that he dedicated and sacrificed his life to overcome. Rarely, if ever, has an American public figure combined a deeply principled philosophical approach to social and political change with the moral force of prophetic religion to so dramatically alter the course of history. There is, of course, the obvious influence of Mahatma Gandhi. But throughout his all-too-short life, King acknowledged his debt to such important American theologians and philosophers as Reinhold Neibuhr, Paul Tillich, Henry David Thoreau and John Dewey in his public speeches, books, articles and essays. In his final public address, “I See the Promised Land,” delivered at the Bishop Charles J. Mason Temple in Memphis the night before he was assassinated on April 4th, 1968, King referenced Plato, Aristotle, Socrates, Euripedes and Aristophanes, Martin Luther (for whom King, at age 5, was “re-named” after his father, Michael King, Sr., also taking the great Protestant Reformers name, visited Germany in 1934), Abraham Lincoln’s “Gettysburg Address,” and The Story of Jericho before reassuring his audience that “we, as a people, will get to the promised land.”

Today, as we honor Martin Luther King, Jr., it is important to remember that he was motivated as much by his admiration for the Declaration of Independence and the Constitution as he was God’s word in taking the grievances of black America public. Just before telling his audience his Memphis that he had “been to the mountaintop . . . and seen the promised land,” King made reference, for the last time, to the aspirational language of the Declaration and the Constitution, referring to them as “those great wells of democracy” which the Founding Fathers “dug deep.” For King, repeatedly invoking the abstract principles of the Declaration and the Constitution were intended to accomplish two essential goals, each of which were co-joined in the pursuit of social justice.

The first was to remind those who viewed him as “un-American” that he was following in the tradition of the men who founded and established the United States by refusing to follow unjust laws that denied individuals fundamental freedoms. In his famous 1963 “Letter From a Birmingham Jail,” King alluded to the Boston Tea Party as an example of civil disobedience, writing that “In our own nation, the Boston Tea Party represented an act of massive civil disobedience.” That was not the first time King made reference to the Boston Tea Party as a moral baseline for the direct action of the civil rights movement. Just a little over three years before King’s “Letter” was published in bits and pieces in popular magazines around the country, King made reference to the Boston Tea Party in an interview on NBC’s “Meet the Press to explain the student “sit-in” movement that had emerged in full bloom in late winter and early spring of 1960. King, of course, had come to national attention as the public face of the Montgomery Bus Boycott, which began in December 1955 and lasted just over a year. For King, calling attention to injustice through nonviolent direct action was firmly within the spirit and intellectual architecture of American political tradition.

Second, King’s invocation of the Declaration and the Constitution was a conscious attempt to soothe white America’s fears that the civil rights movement represented some foreign-directed effort to undermine American social and political institutions. In his most famous public address, the “I Have a Dream” speech delivered at the August 28th, 1963 “March on Washington for Jobs and Freedom,” King, at the top of his remarks, noted that [f]ivescore years ago, a great American, in whose symbolic shadow we stand today, signed the Emancipation Proclamation.” Two paragraphs later, King would refer to the “magnificent words of the Constitution and the Declaration of Independence” as a “promissory note to which every American was to fall heir. This note was the promise that all men, yes, black men as well as white men, would be guaranteed the unalienable rights of life, liberty, and the pursuit of happiness.” For the 250,000 people who gathered on the Mall in Washington, D.C. that afternoon, such a public gathering represented what the First Amendment was intended to do: allow individual citizens the freedom to assemble peaceably and to petition the government for a redress of grievances. Just like the 52,000 black Montgomery citizens who endured economic reprisal and violent terror by insisting that the First Amendment permitted them to express their grievance peacefully and lawfully. For King, the First Amendment, sometimes referred to as the “People’s Darling Privilege,” was tied to the promise of the Fourteenth Amendment that all persons in the United States were guaranteed the equal protection of the law. Far from encouraging violence and extra-legal measures to achieve the broader goals of enfranchisement, personal freedom and equal standing, King was a committed constitutionalist who believed the remedies for what ailed the nation were right there in front of it.

Since his death, Martin Luther King, Jr. has been mythologized as a man of soft curves rather than hard edges. Sometimes lost in the public persona of King the great orator, leader and public intellectual was the truly radical nature of his beliefs, particularly towards the end of his life. Racism, economic injustice and militarization were the three pillars of King’s public conscience. He went to Memphis in March and April of 1968 to support the strike by black sanitation workers, who labored under horrible conditions spared their white counterparts. In April 1967, he gave his famous address at Riverside Church in New York, “A Time to Break the Silence,” in which he came out directly against the Vietnam War, a decision that effectively banished him from Lyndon Johnson’s White House and rendered him persona non grata among former allies in Congress who had supported the historic civil and voting rights acts passed just a few years before. The outpouring of public grief that accompanied his murder stood in stark contrast to his standing in public opinion. King, as strange as it sounds, had become one of the most unpopular public figures in America. The stirring orator who, in the minds of many white Americans, singlehandedly led the civil rights movement and encouraged America to come together as one was far preferable to the man who believed he had no choice but to bear witness to the twin tragedies of war and poverty.

When Martin Luther King, Jr. offered the hope that one day his “four little children would live in a nation where they will not be judged by the color of their skin but by the content of their character,” he was invoking the words of John Marshall Harlan’s (sole) dissent in Plessy v. Ferguson (1896) that the Constitution was “colorblind and neither knows nor tolerates classes among its citizens.” Again, King was simply asking the nation – its people, its political institutions and those who served in them – to make good on the abstract promises of the Constitution. King was willing to forgive the men who enslaved and imprisoned African Americans by using their words in service of higher ideals. We live in a perilous time when respect for the Constitution and the rule of law are undermined on an hourly basis by the current president. Taking a moment to reflect on Martin Luther King Jr.’s commitment to peaceful change through constitutional means is needed now more than ever.