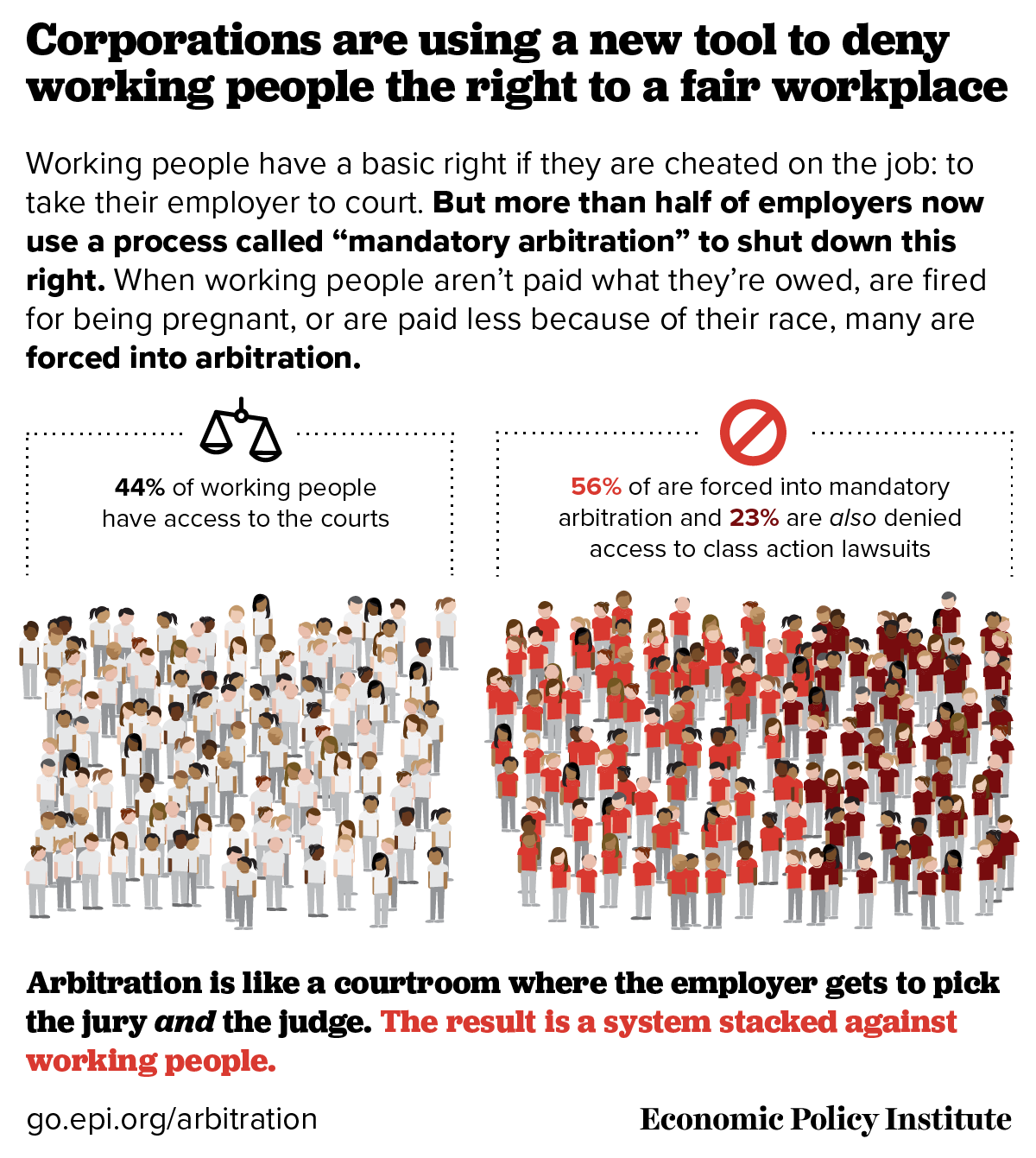 *This piece originally appeared on the EPI blog.

Today, EPI released a new paper by Cornell professor Alexander J.S. Colvin, which shows that more than half of all private sector non-union workers are currently subject to mandatory arbitration agreements—denying them access to the court system to resolve workplace disputes. Colvin also found that 41 percent of employees subject to mandatory arbitration also have waived their right to pursue work-related claims on a collective or class basis. Next week, the Supreme Court will consider whether arbitration agreements that include class and collective action waivers of all work-related claims are prohibited by the National Labor Relations Act (NLRA). The Court is scheduled to hear argument in National Labor Relations Board v. Murphy Oil USA (along with two other cases Ernst & Young LLP v. Morris and Epic Systems v. Lewis) on October 2.

The NLRA guarantees workers the right to stand together for “mutual aid and protection” when seeking to improve their wages and working conditions. Employer interference with this right is prohibited. However, as Colvin’s report shows, employers are increasingly requiring workers to sign arbitration agreements that force them to waive their rights to collective actions and instead handle all workplace disputes as individuals. In practice, that means that even if many workers faced the same type of dispute at work, each individual employee must hire their own lawyer, and must resolve their disputes out of court, behind closed doors, with only their employer and a private arbitrator.

The National Labor Relations Board (NLRB) first reviewed arbitration agreements with class and collective action waivers in D.R. Horton, Inc. (357 NLRB No. 184 (2012)) and found that these forced arbitration agreements interfere with workers’ right to engage in concerted activity for their mutual aid and protection, in violation of the NLRA. Corporate interests and the Trump administration—in a stark departure from the position taken by the Obama administration Department of Justice—are fighting the NLRB. They are focusing their argument on the Federal Arbitration Act (FAA), which requires courts to enforce arbitration agreements, subject to contract defenses. However, the Supreme Court has never enforced an arbitration agreement that violates another federal statute—as the arbitration agreements here violate the NLRA by requiring workers waive their fundamental right to join together to address workplace disputes. Still, that is what corporate interests arguing against the NLRB are asking the Court to do in this case. If they succeed, they will, as the NLRB argues in its brief, be using “private contracts to eviscerate the public rights Congress protected in the NLRA.”

Murphy Oil is a significant case for working people. If the Court sides with the Trump administration, workers could be required to waive our right to pursue workplace disputes on a collective or class basis, and instead we will be forced to individually arbitrate work-related claims. This is troubling, considering that employees who arbitrate grievances against their employer are much less likely to win than workers who file in federal court. Employees in arbitration win only about a fifth of the time (21.4 percent), whereas they win more than a third (36.4 percent) of the time in federal courts. And, when workers do prevail in arbitration, they are awarded far less in damages.

Workers depend on collective and class actions to enforce many workplace rights. Employment class actions have helped to combat race and sex discrimination and are fundamental to the enforcement of wage and hour standards. Without the ability to aggregate claims, it would be very difficult, if not impossible, for workers to find legal representation in these matters. This is particularly true for low-wage workers, whose cases are unlikely to involve large enough awards to attract attorneys to invest time in the case. That is the power of class and collective action suits: they let workers pool their claims, making it possible for an attorney to earn enough to make the case worth pursuing. And with class and collective action waivers in arbitration agreements, the arbitration process can only compensate an individual worker—rather than remedy systemic labor and employment violations experienced by many workers. Class and collective actions also help to identify and redress systemic violations of labor and employment protection. Court filings, unlike arbitration procedures, are public. Class action suits have served to draw attention to employer practices that violate worker protections and help the officials tasked with enforcing these laws develop targeted enforcement strategies that benefit all workers. Public awareness of these practices is critical to making sure we have policies that adequately protect workers.

In 1935, Congress recognized the importance of giving workers a collective voice in the workplace when it enacted the NLRA. The Supreme Court has the opportunity to uphold this fundamental right in Murphy Oil. If, however, the Court sides with corporate interests and the Trump administration, workers will likely be forced to sign away the long-held right to join together with their coworkers to address workplace disputes.