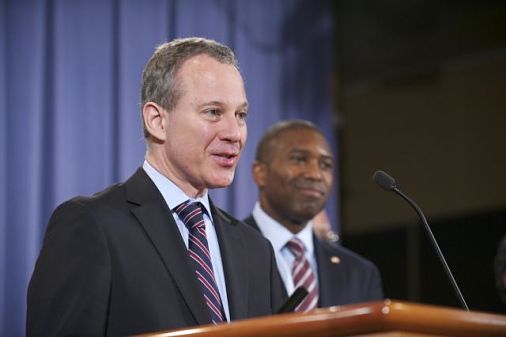 *This piece was originally posted on Crooks and Liars.

"There's no limit to what can be accomplished if it doesn't matter who gets the credit."

It might not be possible to say conclusively who deserves credit for this insight - original-authorship credit, that is - but it is pertinent to Special Counsel Mueller's investigation, especially when his investigation focuses on Trump, his family, and their businesses.

First, recall that, during an interview with the New York Times, approximately three months after Mueller's appointment in May 2017, Trump identified his non-Russia-related finances and family's finances as a "red line" Mueller should not cross:

[NYT]: Last thing, if Mueller was looking at your finances and your family finances, unrelated to Russia — is that a red line?

[NYT]: Would that be a breach of what his actual charge is?

It's noteworthy that the Times interviewers framed the question as "...finances and...family finances, unrelated to Russia..." It appears they assumed that Russia-related finances are in bounds. This assumption seems questionable: would Trump actually permit or tolerate Mueller's investigating any aspects of his or his family's businesses?

Trump didn't allow the public to see his tax returns when he was a presidential candidate; he doesn't permit disclosure of them now so the public can assess, for example, how he benefits from the recent changes in U.S income-tax laws. It thus seems probable Trump would oppose a federal prosecutor's seeking to examine his Russia-related finances, even if Russian nationals or the government were to disclose publicly any prior or planned investments in Trump businesses.

Trump declined to say specifically whether he'd fire Mueller if he crossed that red line: "I can’t, I can’t answer that question because I don’t think it’s going to happen."

Regardless, Trump identified a red line and hasn't apparently erased or blurred it. And the actual location of that line in relation to Trump family finances unrelated to Russia is at issue again:

Special counsel Robert Mueller's interest in Jared Kushner has expanded beyond his contacts with Russia and now includes his efforts to secure financing for his company from foreign investors during the presidential transition, according to people familiar with the inquiry. This is the first indication that Mueller is exploring Kushner's discussions with potential non-Russian foreign investors, including in China.

Assuming Mueller is in fact interested in Kushner's finances beyond those specifically related to Russia, he also might be interested in how Ivanka Trump's business interests have advanced in China (recently buttressed by favorable intellectual property rulings there). He might also attend to the Trump Organization's recent negotiations over business development in India, led by Donald Trump, Jr..

If Mueller is investigating any of these matters - which is unknowable so long as his investigation remains largely leak-free - he's certainly been alerted to Trump's trigger, and the trigger of his defenders. Mueller's office has recently issued a new indictment concerning Russian election interference, a superseding indictment of Paul Manafort, and a separate superseding indictment of Manafort and Rick Gates. The Special Counsel also has secured additional guilty pleas, from Rick Gates, as well as an identity-thief and a lawyer. As these developments have been announced, Mueller also might have noticed that Trump defenders are calling more loudly for presidential pardons of anyone in whom Mueller might be interested.

By this point, it seems fairly clear that Trump could issue presidential pardons to anyone targeted by Mueller (perhaps including Trump himself). Such pardons would protect the recipients from federal prosecution or - if already federally convicted - relieve them of fines and/or prison sentences. And, it doesn't require statistical expertise to predict confidently that Trump's daughter, son, and son-in-law are in the "high-probability-of-presidential-pardon" cohort.

However, as noted previously here, there are legally significant limits to Trump's pardon power. Most importantly for this discussion, he can't pardon people who've been charged or convicted under state criminal laws, even if their conduct amounts to a crime under federal law.

State Criminal Prosecutions After Pardons Under the "Dual Sovereignty Doctrine"

State law-enforcement officials (attorneys general and county prosecutors, usually), acting under State criminal laws, may prosecute conduct that is criminal under State law, even if that exact same conduct, by the exact same actors, has been presidentially pardoned under federal law. For example, under the "dual sovereignty doctrine," a homicide might be a federal hate crime and a state-law homicide. The perpetrator of the hate-crime could be presidentially pardoned, so that the crime could not be prosecuted under federal criminal civil-rights statutes, but the homicide could still be prosecuted as an ordinary murder under state law.

Presidential pardons for Trump family members could give them no protection against state civil suits or criminal prosecution for presidentially pardoned conduct that also violates state laws. This is why reports such as this one, of Mueller's office sharing information with at least one state Attorney General (Eric Schneiderman of New York), are significant.

AG Schneiderman has pursued Trump before: a lawsuit by his office (one of a number of such suits) helped extract $25 million from the Trump organization for former students of Trump University.

There appears to be such a basis in New York. In fact, there might be multiple bases.

New York's AG has substantial powers under state law to sue civilly and/or prosecute a variety of financial crimes, including those involving fraud. Schneiderman may commence investigations, for example, under the Martin Act, the Executive Law, and the General Business Law. These three laws afford him jurisdiction to pursue fraud involving securities, real estate, and other forms of business transactions.

Not all of these laws might apply specifically to Manafort (or to any or all Mueller's other targets). However, it appears that several of the transactions alleged in Mueller's February 22 superseding indictment of Manafort and Gates would fall within Schneiderman's jurisdiction for criminal prosecution.

Beginning at page 20 of the superseding Manafort/Gates indictment, under the heading, "The Financial Institution Scheme," paragraphs 26-44 allege fraud involving the procurement or use of loans on real estate situated in New York. The description of the scheme begins here:

26. Between in or around 2015 and the present, both dates being approximate and inclusive, in the Eastern District of Virginia and elsewhere, MANAFORT, GATES, and others devised and intended to devise, and executed and attempted to execute, a scheme and artifice to defraud, and to obtain money and property, by means of false and fraudulent pretenses, representations, and promises, from banks and other financial institutions. As part of the scheme, MANAFORT and GATES repeatedly provided and caused to be provided false information to banks and other lenders, among others.

Paragraphs 28-44 allege various fraudulent acts to procure loans on residential real estate located in Brooklyn, Manhattan, and Bridgehampton - property physically sited within Schneiderman's jurisdiction. The allegations don't name the lenders that supplied the funds on these properties, but they also could be located within New York. From the standpoint of a state civil investigation or criminal prosecution for fraud in New York, it's probably sufficient that the properties themselves are located in the State.

Schneiderman criminally prosecutes residential mortgage fraud, including what appear to have been conspiracies to commit such fraud. See, for examples, this case, which involved "submitting refinance applications which contained false information," and this case, which involved "preparing false documents used to obtain residential mortgage loans."

Thus, Manafort's recent statement about vigorously defending himself in lieu of pleading guilty (perhaps intended to remind Trump of the value of pardoning Manafort), ultimately might be of limited value to him if Mueller hands off the prosecutorial baton to Schneiderman. Presidential pardons of others, including Jared Kushner, Ivanka Trump, and Donald Trump, Jr., similarly might afford only limited legal protection to them.