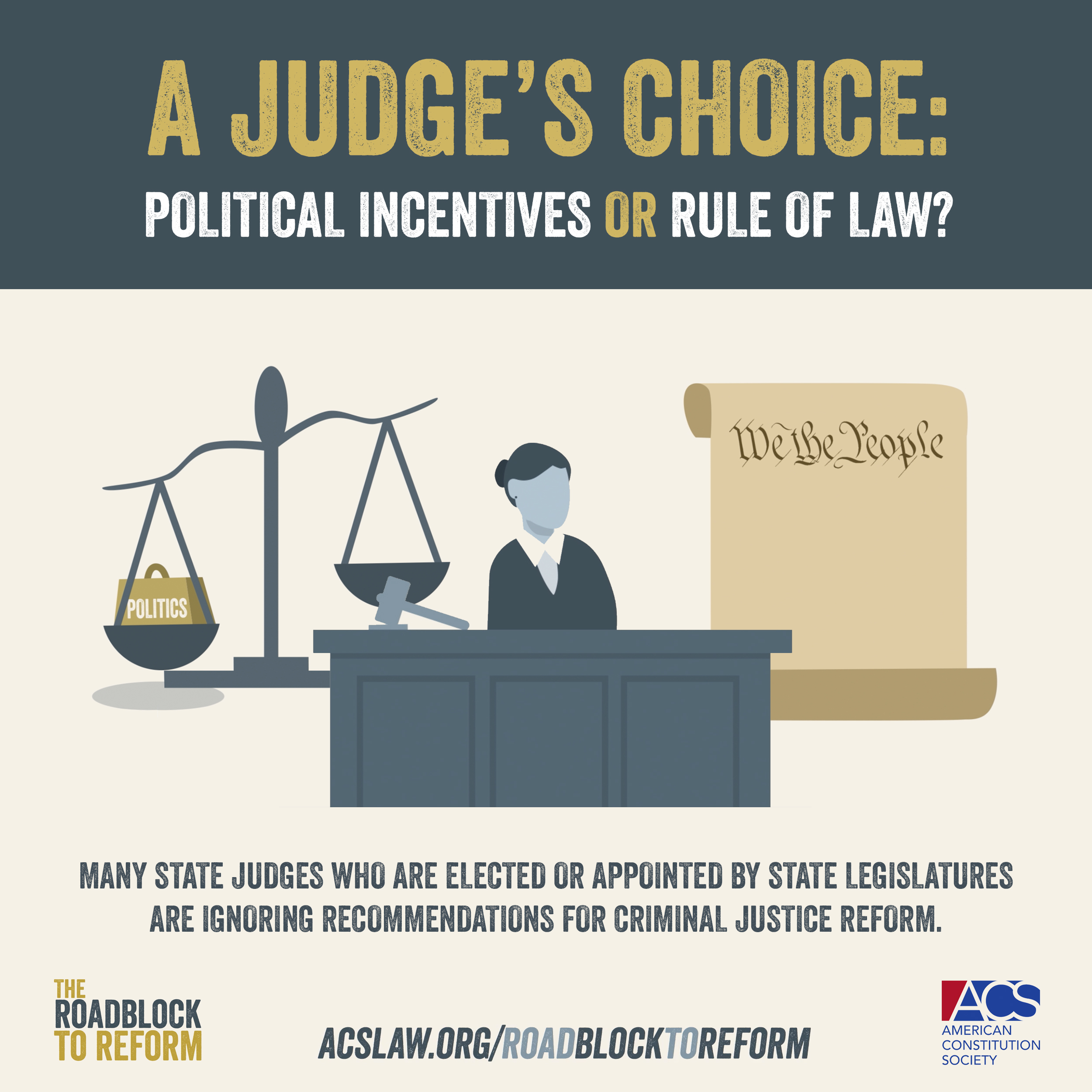 The American Constitution Society is pleased to release Roadblock to Reform, a report by Megan T. Stevenson and Jennifer L. Doleac. Roadblock to Reform examines how politicized systems of judicial selection in Kentucky and Virginia have created incentives for state court judges (principally, to appear “tough on crime”) that have undermined criminal justice reforms in those states. The report examines how judges in those states have applied risk assessments, an increasingly popular but still controversial algorithm-based reform that legislators have hoped would reduce incarceration rates. It concludes that risk assessments have not meaningfully reduced levels of incarceration, because judges – responding to political incentives – have often not followed recommendations under the systems, opting instead for harsher measures.

The Roadblock to Reform serves as an important warning that the pressures placed on judges by politicized selection and retention systems are a barrier to any meaningful criminal justice reform.  If even risk assessment-based reforms, which are often justified by the belief that they are politically palatable in ways that more ambitious reforms are not, are undermined by politicized judicial selection then ridding judicial selection of improper political influence is an important precondition to criminal justice reform.

What are risk assessments, and why are they controversial?

Both Kentucky and Virginia (and several other states, including California) have adopted algorithmic risk assessments in an attempt to reduce incarceration rates with minimal effect on public safety. Some criminal justice reformers believe that these data-driven tools could standardize decisions about pretrial detention and sentencing to make sure that only the most high-risk offenders are incarcerated. Risk assessment algorithms are designed to determine the likelihood of committing a new crime or failing to appear in court by estimating the correlation between “inputs” like criminal history, education, employment, age, gender, etc. and the outcome that the tools seeks to predict.

To be sure, risk assessments have been harshly criticized by other criminal justice reformers, who argue that they are opaque and technocratic “black box” systems, ineffective at reducing incarceration and de facto tools for perpetuating racism and inequality in the criminal justice system at the expense of genuine, thoroughgoing reform.

But granting those concerns, the question remains: are risk assessments succeeding, even on their own terms? And if not, why not?

In Kentucky and Virginia, Risk Assessments Have Not Reduced Incarceration

The researchers decided to study Kentucky and Virginia because their reforms occurred at the statewide level instead of at the county level which ensures that there are many observations on which to base their analysis. In addition, both states began using algorithmic tools to aid in criminal justice decision making long ago. Kentucky has used some sort of algorithm to aid in the pretrial custody decision since the 1970s and made it mandatory in 2011. Virginia piloted risk assessment in the late 1990’s and adopted it statewide in 2002. Finally, both states adopted risk assessment with the explicit goal of reducing jail and prison populations.

The key findings of Roadblock to Reform reveal that many judges ignore the recommendations associated with the risk assessment tools.

Kentucky and Virginia both employ systems of judicial selection and retention which have the potential to expose judges to significant political pressures relating to criminal justice issues. In Kentucky, trial court judges obtain and retain office by running in nonpartisan elections, except in cases of filling an unexpired term, in which case they are appointed by the Governor. They serve eight-year terms. In Virginia, trial judges are appointed by the legislature, and also serve eight-year terms, at the conclusion of which they may be re-appointed or replaced.

The authors of the report note that judicial decision making plays a prominent role in the effectiveness of algorithmic risk assessment tools. Judges come to the bench with their own preferences about sentencing, which is undesirable in a system where the law should provide an objective standard and consistent outcomes across a range of cases. Crucially, the authors note judges respond to incentives and know that these incentives work as a sort of one-way ratchet. That is to say, voters (or legislators engaged in judicial selection and retention) are more likely to punish a judge for releasing someone who then commits a crime than for locking up someone who was not a threat. Judges are therefore incentivized to over-incarcerate.

A telling counterexample to the Kentucky and Virginia experiences is New Jersey, where judges are appointed and retained under a system dominated by the state’s governor. There, strong support for reducing incarceration levels by the former and current governor seems to have created a different set of incentives for trial court judges, who have accordingly embraced the spirit of the reform. But the real key to achieving criminal justice reform is to lessen to the greatest extent possible the political incentives to which judges are exposed.

Reformers have identified a number of solutions to the problem of politicized judicial reform. A recent Brennan Center report establishes a framework for limiting to the greatest extent possible the role of politics in judicial selection. Key principles of the proposal include:

In any case, as the Roadblock to Reform shows, effective, sustainable criminal justice reform must include judicial selection reform.