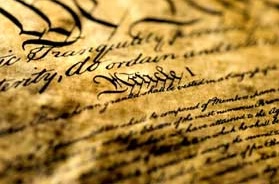 What texts should the American Constitution Society use to introduce its members to progressive constitutional values? I mean besides our nation’s founding texts, The U.S. Constitution and The Declaration of Independence as well as The Federalist Papers.

We need principled idealists to wake us up from our dogmatic slumbers. Our liberal/conservative debate must again approach civility. For productive conversation and mutual constructive criticism, it’s high time that ACS reframe the national debate. To this end, I move that two books initiate ACS members into the mysteries of constitutional law: Associate Justice William Douglas’ Points of Rebellion and Associate Justice Hugo Black’s A Constitutional Faith.

William Douglas’ 97-page manifesto should initiate ACS members into the hardboiled liberalism of the New Deal, the Fair Deal, the Great Society, and beyond. Points describes how We the People should command the “Establishment”: “We must realize that today’s Establishment is the new George III. Whether it will continue to adhere to his tactics, we do not know. If it does, the redress, honored in tradition, is revolution.”

Douglas’ analogy prompts us to pay close attention to The Declaration of Independence’s bill of particulars against George III. It invites us to consider how American colonists’ complaints against the King resonate with many American citizens’ contemporary complaints against the Pentagon and the police state. Points thus suggests how we Americans should frame our founding text. It outlines revolution through altering, not abolishing, government.

Points offers a goldmine of soundbites. Consider Douglas’ criticism of “socialism implicit in vast subsidies to the military-industrial complex,” and “the upside down welfare state [that] helps the rich get richer and the poor, poorer.” ACS would do well to encourage its members to explore Douglas’ lines of inquiry:

Points brims with rhetorical possibilities. It reframes The Declaration of Independence for today’s cutting edge of activism, rather than a mere historical curiosity dated July 4, 1776. Points sketches a new Reconstruction. We the People should work out its details to command and control the Establishment.

Black’s 66-page credo frames conservatism in humane, rather than formalist, terms. A Constitutional Faith puts our written constitution in the historical context of English experience. His ideal judges, guardians of our constitutional rights, defend public welfare and affirm the public good by deciding cases according to the terms of The Constitution, not their own subjective views of “fairness,” “reasonableness,” or “justice.” Goldilocks chose the porridge “just right.” Likewise, judges should neither legislate their policy preferences as judicial activists, nor evade their constitutional responsibilities through so-called judicial restraint.

Black strictly construes due process as a matter of procedural protections of life, liberty, and property. Black frames the due process clauses of the Fifth and Fourteenth Amendments in terms of Magna Carta’s “law of the land.”

Black’s First Amendment views are especially noteworthy: “The right to think, speak, and write freely without governmental censorship or interference is the most precious privilege of citizens vested with power to select public policies and public officials.” To Black, the right of free speech is an absolute, notwithstanding occasional “time, place and manner” restrictions. It is a necessary condition for representative democracy. Hence his strict constructionist mantra that “no law means no law.”

A Constitutional Faith conceptualizes how we Americans may fulfill our written constitution’s purpose, which, according to Black, is government controlled by the people. It provides historical context for our constitution even as Douglas’ polemic impresses power to the people.

Douglas and Black, the progressive liberal and the progressive conservative, championed the public good. They transcended the factionalism that is subverting our democracy, what James Madison complained about in Federalist no. 10. Thus, Points of Rebellion and A Constitutional Faith are the perfect ACS primers. Many ACS members are youthful lawyers on the make. What better appeal to youthful idealism than the credos of real-life Atticus Finches?