On MLK Day, Let Us Pledge to Courageously Meet the Problems of Today 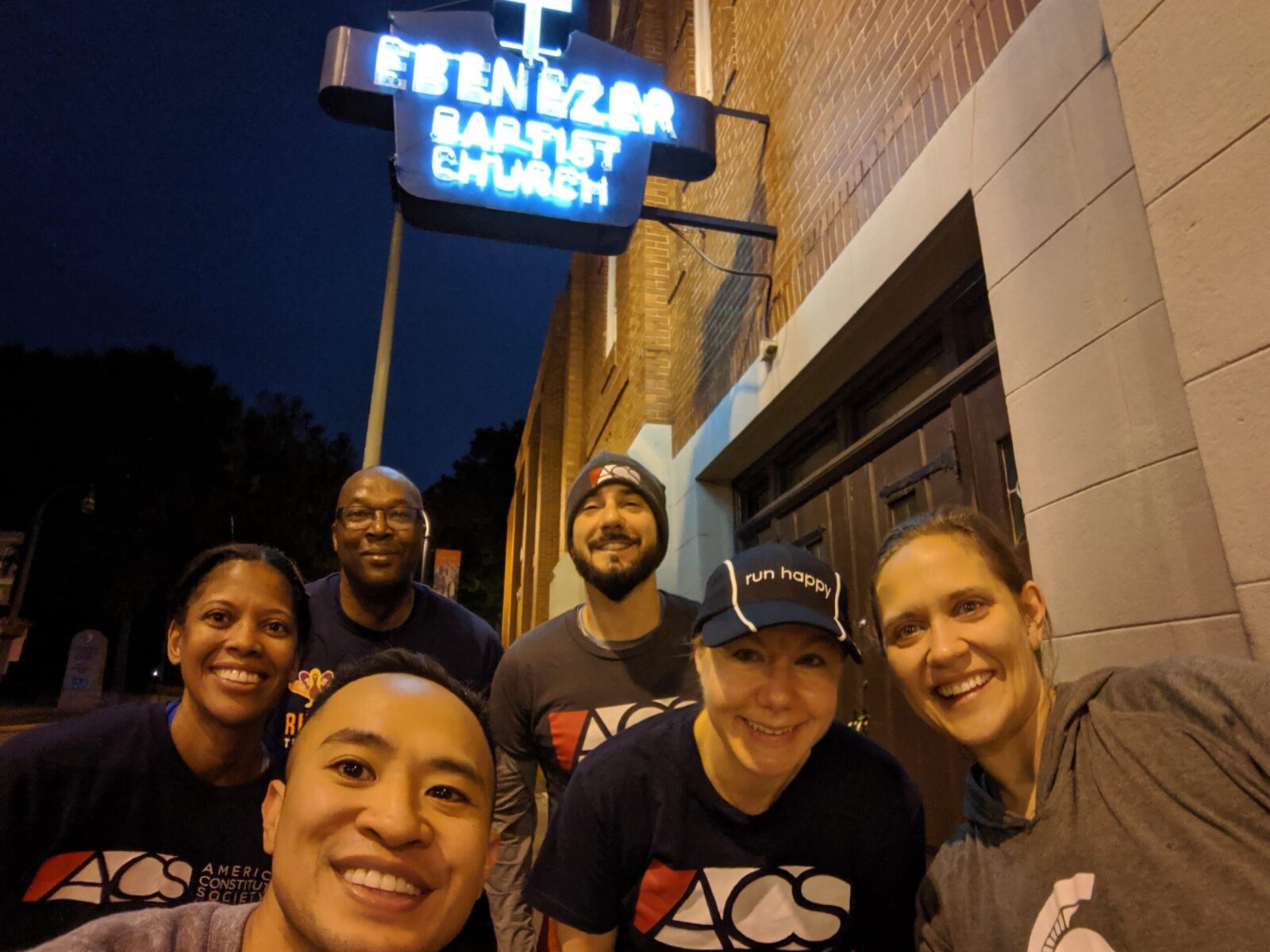 The author (back left) and other ACSers out for an early morning run during the 2019 Atlanta convening.

If only to save ourselves from bitterness, we need vision to see the ordeals of this generation as the opportunity to transfigure ourselves and American society,” Rev. Dr. Martin Luther King Jr. implored an audience gathered on the steps of the capitol in Montgomery, Alabama, on Easter Sunday in 1958.  Dr. King was once again making history by using powerful and moving words, combined with nonviolent action, to call attention to injustices in our society.

As Martin Luther King Day approaches, we are once again living through a period when history of the highest order is being made right before our eyes.

In this year alone, voters from the State of Georgia made history by electing two new senators, Jon Ossoff and Rev. Raphael Warnock, to replace the state’s incumbent office holders. Rev. Warnock, like Dr. King, is a graduate of Morehouse College, a small liberal arts school known for infusing moral leadership in every aspect of its curriculum. He has also followed Dr. King’s path in pastoring the historic Ebenezer Baptist Church in Atlanta.

I, too, am a graduate of Morehouse, where I vividly recall hearing from professors who taught Dr. King and others who knew him well. As I reflect on what I have learned about Dr. King’s life of purpose, I cannot help but to compare his generation’s struggles to the tumultuous times of today.

This period of reflection also makes me think back to an autumn day in 2019, when I went on a morning run through the Sweet Auburn neighborhood in Atlanta with a magnificent band of lawyers from the American Constitution Society. We spent the previous day convening, discussing our shared commitment to the U.S. Constitution, and ways to use our legal education and experiences to improve the lives of others.

After a day of exercising our collective minds, we agreed to ignore the rain forecast and embark upon a group run to exercise our bodies. Our route took us down Auburn Avenue, first to Ebenezer, where Dr. King was ordained and later preached in the same pulpit as his father and grandfather, then past beautiful murals designed to remind visitors of the neighborhood’s rich history in the civil rights struggle and beyond, and finally to the birth home of Dr. King.

The exhilaration from the experience was tempered by the solemn acknowledgement of this nation’s struggles to live up to its ideas. As a former FBI agent, I found myself thinking about how the FBI as part of its Counterintelligence Program, commonly known as CoinTelPro, viewed Dr. King as a communist threat who needed to be contained. It has been widely reported that the FBI even sent Dr. King a “suicide letter,” where they threatened and encouraged him to kill himself. A previous FBI director said he kept a copy of the Dr. King wiretap request on his desk as a reminder of the organization’s enormous power and potential for abuse.

This week, the nation was once again reminded of the complex nature of law enforcement – they must be appropriately resourced and supported while simultaneously operating within the confines of the law and Constitution. Law enforcement powers are vast, but as Dr. King’s case demonstrates, they must not be abused.

With a global pandemic continuing to take thousands of lives each day, social and political unrest occurring inside and outside of both houses of Congress, and an upcoming change in presidential administrations, the country is once again at an inflection point. One option is to retreat to a place of hatred and bitterness. Or, we can choose the route suggested by Dr. King on that Easter Sunday in 1958, and “…in the interest of human dignity and for the cause of our democracy,” we can appeal to our fellow American to “gird their courage to speak out and act based on their basic convictions.”