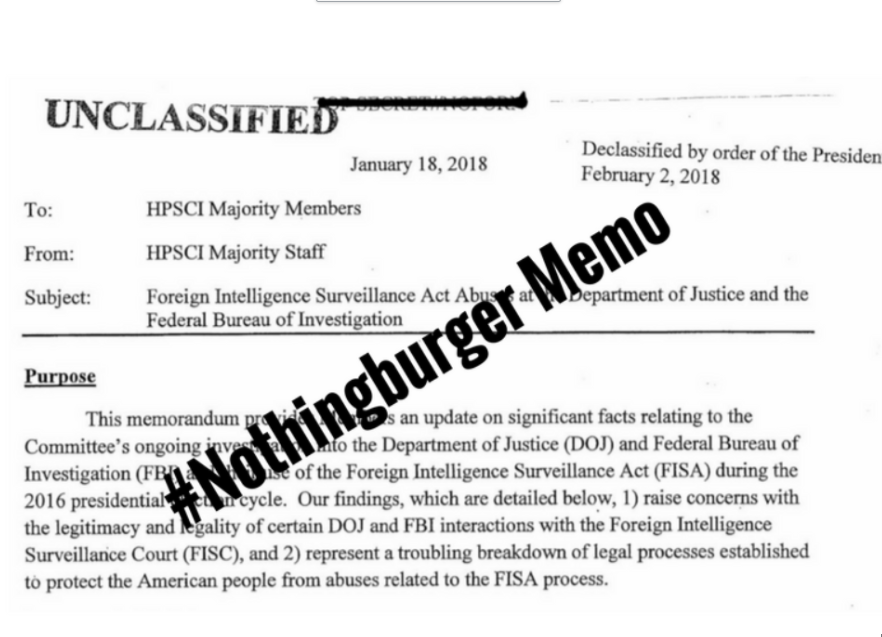 The Nunes memo is public. Anyone can now read about a warrant application to conduct surveillance on former Trump campaign advisor Carter Page who in 2013 called himself “an informal advisor to the staff of the Kremlin in preparation for their Presidency of the G-20 Summit” according to a Time magazine story.

Let me save everyone the effort. The four-pager is a big nothingburger. There are no major reveals on the Justice Department’s investigation of Russia’s interference in the 2016 presidential election.

Perhaps most telling are the omissions. For example, the memo purports to critique the October 2016 FISA warrant application on Page without ever acknowledging that its subject had come under FBI scrutiny a full three years earlier for contacts with suspected Russian operatives. As the Minority of the House Permanent Select Committee on Intelligence notes, “...refusal to allow release of a comprehensive response memorandum prepared by Committee Democrats is a transparent effort to suppress the full truth.”

This amateurish effort appears to be simply another installment in the eight-month smear campaign against the Russia probe by Trump allies. In a prebuttal, ACS and CREW identify and describe the speciousness of several lines of attack against the Mueller investigation. This latest salvo, yet again, provides no grounds to discredit the Special Counsel’s inquiry or its leadership.

Nevertheless, the president appears poised to use the Nunes memo as grounds for firing Deputy Attorney General Rod Rosenstein, who established the order for a special counsel and oversees the inquiry. After the memo’s release, Trump was asked by reporters if he planned to fire Rosenstein. Reportedly, he said, “You figure that one out.”

We are now watching Trump’s Saturday Night Massacre in slow motion right before our eyes. This is shameful.