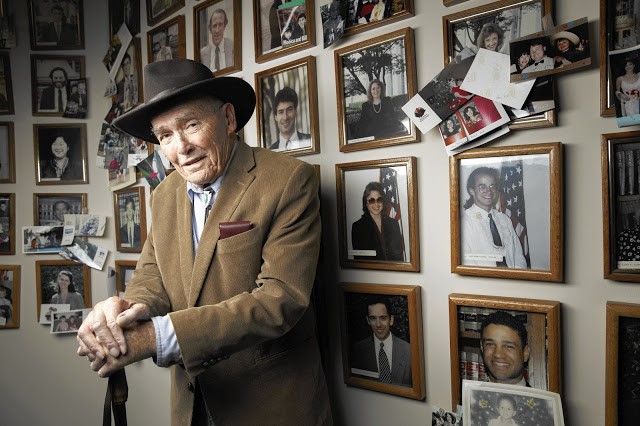 *This piece was originally posted by the Ninth Circuit Blog.

I’m invoking author’s privilege to pay tribute to Judge Harry Pregerson, for whom I clerked. He passed away last week.

At the memorial service on Friday eloquent speakers struggled with their tasks before a huge (and teary) crowd. Think of that that trope of blind men describing their parts of an elephant – it was a life far too big to take in with any one grab. I’ll therefore mull one small corner of the Pregerson pachyderm: Harry the Judge.

In the Ninth the senior active member of a three-judge panel assigns the job of writing the majority disposition. That senior judge can accordingly horde a juicy plum of an opinion to write for themselves. Appointed by Carter in 1979, the very senior Judge Pregerson often controlled this valuable power of the pen.
So what high-profile appeals did he assign himself to write?
Inevitably, he took the Social Security benefit cases, the immigration appeals, the guideline arguments – legions of obscure and “unimportant” opinions that some of his colleagues may have been secretly relieved to dodge. Sure, he’d tackle cutting-edge con law cases, and yes, his decisions have made the New York Times. His real passions, however, were disability insurance benefits and the absurd intricacies of the Immigration and Nationality Act. The less powerful, prestigious and newsworthy the plaintiff or criminal defendant, the more likely that appeal would end up on the desk of a Pregerson clerk to help with a draft.See e.g., Tackett v. Apfel, 180 F.3d 1094 (9th Cir. 1999) (Admin law judge required to call vocational expert for a disability claim) (citing, coincidentally, the persuasive authority ofother J. Pregerson disability decisions!)

Lipman is a notable example of this opinion cherry-picking. Michael Lipman got twenty-one months for illegal reentry. See United States v. Lipman, 133 F.3d 726, 728 (9th Cir. 1998). He had “numerous” felony convictions. Id. Lipman argued his guideline sentence should have been lower because he had been assimilated into American society. Id. Honestly, who really cares about the Lipmans in our world – undocumented aliens who have racked up multiple felony priors and are convicted of illegal reentry?

In Lipman, the Judge explained that cultural assimilation is a valid departure basis from the (then) mandatory guidelines. Id. at 732. This 19-year old opinion is now a quirky little corner of the increasingly-irrelevant sentencing guidelines. Yet judicial recognition of this important facet of our clients’ humanity has made a real difference for hundreds of assimilated undocumented aliens facing harsh federal sentences.Pregerson cared about the little guy. He even cared when the little guy was – well, a bit of a schmuck. The Judge was a proud Marine, a Purple Heart recipient who was grievously wounded on Okinawa in WWII. Yet in two published cases Judge Pregerson came out swinging hard on behalf of our nutty clients who lied about receiving Purple Hearts. See e.g. Blog entry here,  see also blog entry here . Remarkable opinions, written by a jurist and a veteran still limping from the shrapnel he carried.

I am one of the one hundred and fifty lawyers who proudly serve in Harry’s Clerk Corps (he never discharged us from duty). We clerks know that Judge Pregerson’s legal legacy isn’t a single bold constitutional opinion, or his brave feuds with a misguided SCOTUS. His true judicial legacies are the innumerable, obscure opinions of which you’ve never heard -- the “unimportant” dispos that made a world of difference to the poor, to immigrants, to our indigent clients facing unjust laws and punitive sentencing guidelines.

Gandhi allegedly observed that “a nation’s greatness is measured by how it treats its weakest members.” That’s an equally good yardstick for a judicial career. By that standard (and by many others), the Ninth Circuit’s Honorable Judge Harry Pregerson was one of the greatest.

*Image of Judge Harry Pregerson and clerks from http://www.dailynews.com/2016/11/10/from-a-hell-of-a-fight-to-fighting-for-the-underdog-dennis-mccarthy/