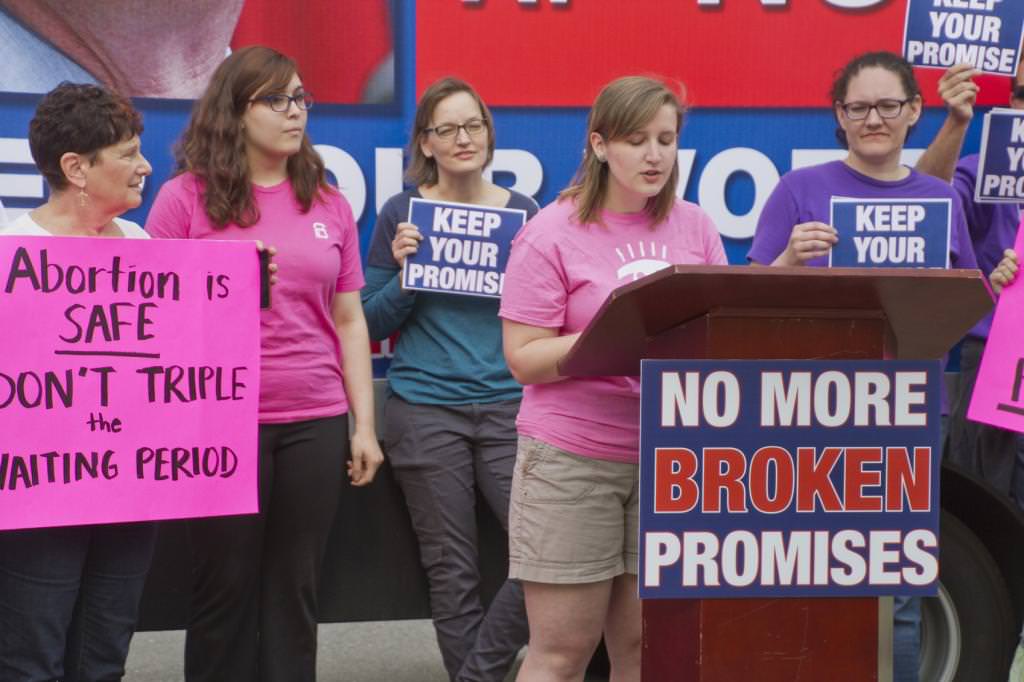 The close of 2017 brings with it the opportunity to reflect on this first year of the Trump Administration—the attacks on the rule of law, the unprecedented resistance, and the hope for a way forward. One campaign promise President Trump has managed to keep is the appointment of a Supreme Court Justice. While Justice Neil Gorsuch testified that he made no indications as to how he would rule in any case, Trump’s campaign promises included Supreme Court appointees who would overturn Roe v. Wade, undermining the Constitutional protection for the right to decide whether to continue a pregnancy, and—he apparently believed—paving the way for states to enact “some form of punishment” for people who have abortions.

Although Trump later claimed that he meant abortion providers should be punished, a claim echoed by staunch conservative lawmakers such as Ted Cruz and Mike Pence, the truth is that criminalization of people for having abortions is already happening. A patchwork of laws and policies leave people vulnerable to arrest under antiquated laws from the 1800s punishing “self-abortion” or “submitting to a criminal abortion;” feticide laws intended to protect pregnant people from violence; and a variety of other laws repurposed by prosecutors determined to punish a person for ending a pregnancy. Even now, a woman in Virginia is fighting for her future, charged with felony abortion, a law which was intended to punish only those who provide abortions. Another woman in Tennessee is under investigation after allegedly inducing a miscarriage. All of this is taking place with Roe largely intact and Planned Parenthood v. Casey recently reaffirmed in Whole Women’s Health v. Hellerstedt.

The current abortion jurisprudence provides a strong starting point for challenging prosecutions for self-induced abortion: the statute at issue in Roe was a criminal abortion statute. However, because the criminalization of people who have abortions was exceptionally rare at the time of Roe, and was impermissible under the common law in most states, the decision focuses on the unconstitutionality of criminalizing abortion provision, speaking less clearly to the unconstitutionality of criminalizing people who have abortions. Nevertheless, no appellate court that has reviewed a prosecution for self-induced abortion has upheld the prosecution, and the one federal circuit court to address the issue squarely in McCormack v. Heideman invalidated Idaho’s statute criminalizing self-induced abortion as an undue burden on the abortion right.

Even so, the task for attorneys seeking to advance reproductive rights and justice is to find arguments that will protect people who self-induce abortions—even if the Administration somehow makes good on Mike Pence’s promise to “see Roe v. Wade consigned to the ash heap of history.” Fortunately, Roe is a floor, and not a ceiling, for any constitutional analysis. There is robust jurisprudence protecting people from unwarranted governmental intrusions into their homes and medical decisions, safeguarding private information, and placing substantive and procedural limits on criminalization. These constitutional protections apply with equal force to people making decisions about abortion.

For instance, while Griswold’s location of the right to reproductive privacy within the “penumbras” and “emanations” of the Bill of Rights has been criticized as vague or perhaps overreaching, the Court was very concrete as to its concerns about policing reproductive decisions. The idea of allowing “police to search the sacred precincts of marital bedrooms” was “repulsive” to the Court, suggesting that the Fourth Amendment would provide grounds to challenge criminal proceedings that require delving into and divulging such personal matters. Criminalization of a health matter also requires intrusion into sensitive medical information to prove the crime and turns health care providers into informants against their patients, raising Fourth Amendment concerns.

The potential for self-incrimination arising from coercive hospital bedside interrogations that are the hallmark of criminalization of self-induced abortion also raise Fifth Amendment concerns. The Fifth Amendment jurisprudence explicitly recognizes the coercive nature of custodial interrogations, which is likely to be exacerbated when people are subjected to humiliating questioning in a healthcare setting, potentially in critical condition, without the aid of an attorney. Short of mirandizing people seeking health care for complications of abortion or miscarriage, which would defeat the purpose of the confidential provider-patient relationship, the only way to avoid the constitutional problems is not to criminalize a health condition.

Criminalization of self-induced abortion also raises questions as to the appropriateness of prosecution as a response to health care matters in the first place. States generally have broad discretion in defining the boundaries of acceptable behavior through criminal laws, but the Eighth Amendment provides protection from state overreach in which acts may be criminalized. For instance, the Eighth Amendment prohibits states from using criminalization to punish people based on a particular status (e.g. substance use disorders, HIV status, or other health issues). Laws that fail to make a measurable contribution to the acceptable goals of punishment (specifically, retribution for wrongdoing and prevention of harm) violate the Eighth Amendment. This is especially so where criminalization is being used for an impermissible purpose like coercing a person’s abortion decision and punishing them for the exercise of a constitutionally-protected right. Justice Brennan’s dissent in Harris v. McRae reminds us that government must “refrain from wielding its enormous power and influence in a manner that might burden the pregnant woman’s freedom to choose whether to have an abortion.” Certainly there is no greater exercise of state power or coercion than the threat of incarceration.

Although people who end their own pregnancies are acting outside of the purview of the formal medical system, the Fourteenth Amendment protects their medical decisions the same as anyone else’s. Everyone has a fundamental right to “possession and control of [their] own person, free from all restraint or interference of others” which encompasses refusal of unwanted medical care, even if that decision threatens an individual’s health. The state can force care only under extremely rare circumstances, and cannot punish people for not accepting care. Appellate case law from several jurisdictions extends this right to decisions people make about pregnancy, even at full-term or in labor. These rights logically extend to a right not to be punished for self-care in the context of abortion.

As the right-wing criticism of Trump’s statement in support of criminalization reveals, actually jailing people for ending their pregnancies is fundamentally different from making abortion inaccessible. While both threaten rights that are critical to self-determination, criminalization marks people with stigma that is permanent, significant, and demeaning. We must liberate people who have abortions from criminalization by repealing, reforming, and challenging the laws and practices that lead to unjust and unconstitutional arrests. It remains to be seen whether Roe remains intact in the future, or whether politicians’ promise of its demise are fulfilled. Either way,a host of rights beyond those explored in traditional abortion jurisprudence can be brought to bear to fulfill Roe’s own promise: abortion without coercion, stigma, or punishment.