Mobilizing the Next Generation of Progressive Lawyers: A Recap of the 2018 ACS Student Convention 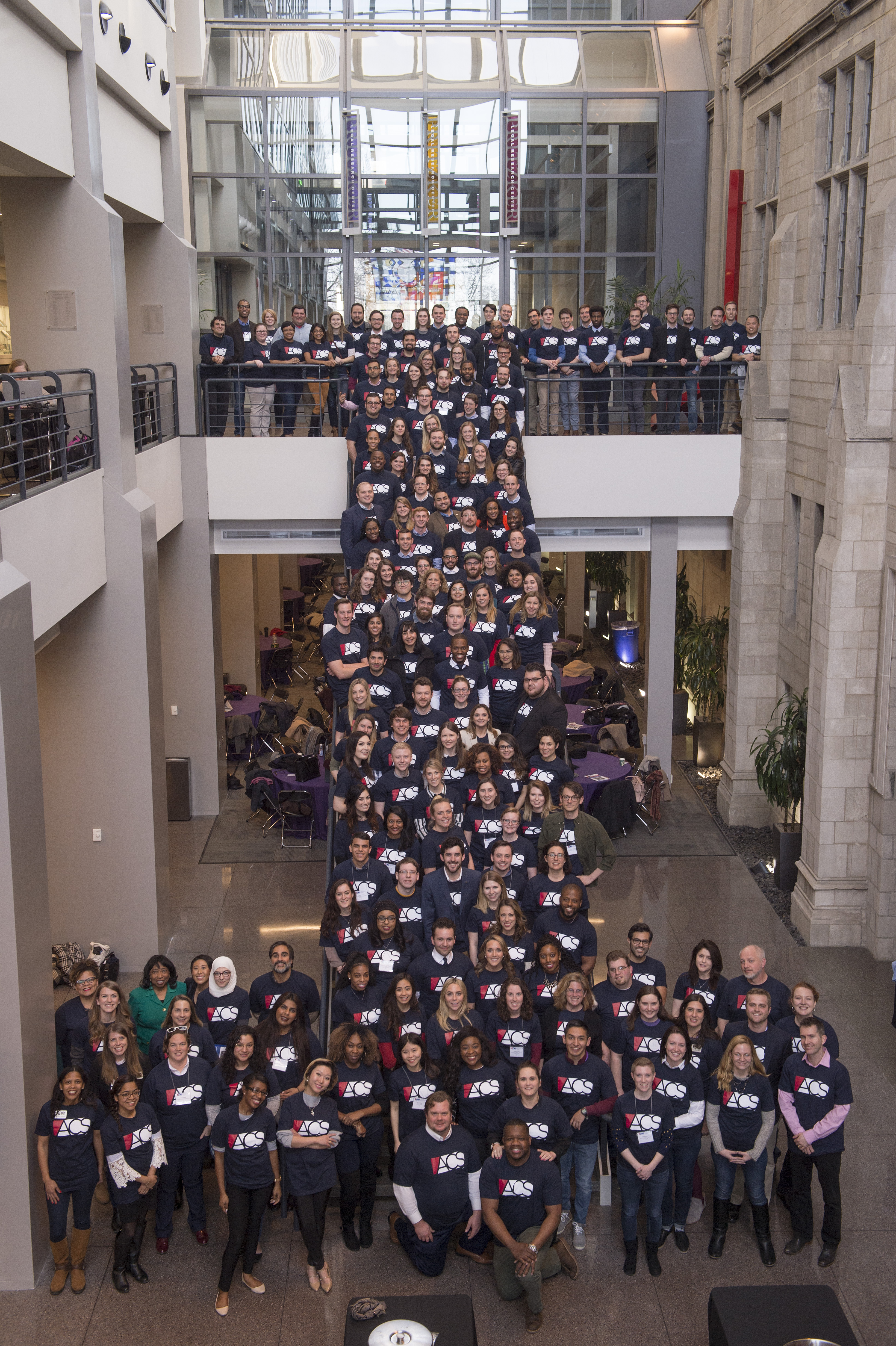 This year’s student convention was held at Northwestern University Pritzker School of Law in Chicago, Illinois, gathering nearly 200 students from 34 states plus the District of Columbia. A variety of scholars, judges, and advocates spoke on a range of topics that included #MeToo in the Legal Profession, the First Amendment, access to justice, police reform, and voting rights. Among the varying topics, speakers showed that the law can be a force to improve the lives of all people.

The most imperative themes of the convention were the urgent needs to: organize for equality, exercise the right to vote, and support others in exercising their rights. The convention began with an emphasis on voter pre-registration, with Meghan Paulas, ACS Director of Student Chapters, stating that we all need to “encourage 16- and 17-year-olds to pre-register to vote. Let’s build a volunteer movement around voter pre-registration. Make it a movement by students and for students.”

On the #MeToo movement, ACS President Caroline Fredrickson stated that horizontal networking is necessary to improve the situation of women in the legal profession. Touching upon the importance of #MeToo in the legal community, Fredrickson stated that “it’s you guys standing up for each other… it’s that kind of collective effort that will begin to change the culture.” With an emphasis placed on a collective call to action, the overall message of mobilization around progressive values and the promotion of gender equality set the tone for the convention. A Leaders from Law workshop featuring prominent attorneys serving as policymakers followed this discussion, and encouraged students to continue their leadership through seeking elected and appointed office. Professor Geoffrey R. Stone then addressed students in presenting the challenges they now face, and how the students’ legal skills, personal conviction, sense of justice, and commitment to individual liberty, dignity, and equality, will lead to progress.

The first keynote speaker, Illinois Attorney General Lisa Madigan explained her role as a defender of progressive values in the face of the Trump administration, in addition to offering tips on how to be a successful progressive lawyer. Rounding out her list of actions that will lead to success were developing one’s skills, using one’s voice, and voting. Her most poignant admonishment was directed to non-voters when she recalled the sacrifices of activists of the past: “People literally lost their lives so that women and African-Americans could vote… We can’t complain if we don’t vote and things don’t go the way we want them to go.”

A surprise visit from Chris Hayes of MSNBC encouraged students to think about the First Amendment as a way to improve the lives of all people. Speaking upon the importance of journalism and remaining active in the pursuit of truth, Hayes advised attendees to prioritize and support journalistic integrity. “As a journalist, my job is to not take cheap shots, not take people out of context, and to engage in good faith arguments.” His description of his vocation ultimately served as a reminder to seek equality by shining a light on inconvenient truths.

Members of the free press panel spoke on the direct and indirect ways that the president is impacting the press and the first amendment. As explained by Katie Townsend of the Reporters Committee for Freedom of the Press, “the words of the president matter, even if they’re empty threats. They can destabilize the system by labeling stories he doesn’t like as ‘fake news’. This has resulted in a spike in threats to journalists.” The need for unhindered and free press, as highlighted by Chris Hayes and the panel on the press, is essential in seeking equality and mobilizing for progressive change.

In remarks by panelists on religious freedom and the power of protests, the need for a stronger focus on civil rights and equality within progressive circles was highlighted. Johnathan Smith of Muslim Advocates states that the progressive movement needs to involve religious minorities, especially the Muslim community, and see their issues as civil rights issues. In a similar vein, Justin Hansford of the Thurgood Marshall Civil Rights Center at Howard University School of Law spoke on the varying ways in which different types of people are treated at protests. While explaining the differences in protesting in Ferguson and Charlottesville, Hansford advised that, “it’s instructive for us to think about the First Amendment not as an abstract construct but as a tool that is applied very differently depending on who the protestor is.”

The second keynote speaker, Vanita Gupta of the Leadership Conference on Civil and Human Rights, continued the focus on voting and furthering racial and gender equality. On DACA, Gupta stated that, “we’ve got to do everything we can to protect the DREAMers.” On describing her time working with black clients and the very high number of African-Americans in prison, she quoted an individual who told her that, “the only difference between 1920 and now is that they can’t hang us on a tree.” Similarly, in the panel on policing the police, Professor Randolph Stone of the University of Chicago Law School stated that, “the big theme found by the police accountability task force in Chicago was race and racism. Underlying issues like segregation and income inequality need to be addressed if we want communities to trust the police.”

The policing panel was conducive to bringing bias in policing to the forefront of students’ minds as they work to close the gaps in racial and gender equality. At the same time, ACS Associate Director of Student Chapters Peggy Li moderated a training on implicit bias in the legal profession featuring Hon. Bernice Donald, U.S. Court of Appeals for the Sixth Circuit; and Hon. Theodore McKee, U.S. Court of Appeals for the Third Circuit. The training included equipping the students with strategies on how to disrupt bias using real examples from voir dire to jury bias to a litigant’s bias in selecting an attorney.

The final plenary panel on strategies for advancing local progress included Barbara Barreno-Paschall of the Chicago Lawyers’ Committee for Civil Rights, who spoke on the importance of voting and running for office and creating those personal connections with people within your community. “It takes a personal connection. Start with a casual conversation and then invite that person to an event or give them an opportunity to take action.” The messages of voting, mobilizing, and pushing for different types of equality were also on view here.

The final keynote remarks from Jason Kander, the founder of Let America Vote, similarly raised the important issues of voting and equality. On efforts to suppress the vote, Kander stated that, “we need to call [depriving citizens of the right to vote] what it is. When it happened fifty years ago, it was un-American, and when it happens now, it’s just as un-American.”

While the 2018 ACS Student Convention involved many unique and distinct voices and messages, the underlying theme that cut across all panels and topics revolved around the importance of using the law to improve the lives of all people. Students left the weekend motivated to mobilize for equality, exercise the right to vote, and support others in exercising their rights.