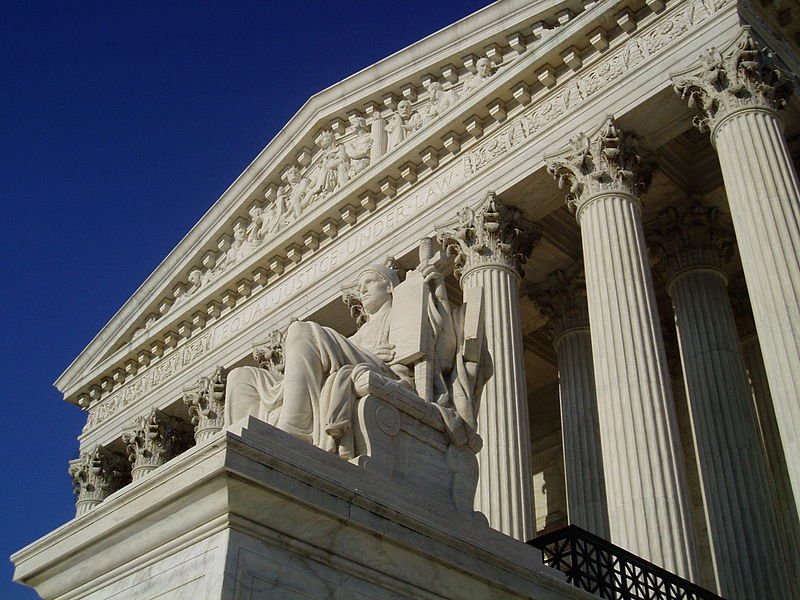 In Janus v. American Federation of State, County and Municipal Employees Council 31, the Court declared unconstitutional labor laws and union contracts in 22 states, the District of Columbia, and Puerto Rico. These laws and contracts required union-represented workers to pay their fair share of the cost of negotiating and administering labor contracts. Using what Justice Kagan described in dissent as a “weaponized” version of the First Amendment, the Court continued its six-year attack on public employee unions.

The case originated when Republican Bruce Rauner was elected governor of Illinois. Rather than negotiate with the state’s public employee unions to address the state’s budget issues, or work with the Illinois legislature to repeal laws he considered an obstacle to that goal, Rauner filed a federal law suit to get fair share fees declared unconstitutional. That says quite a bit about Janus – it was from the start an effort to use the federal courts to thwart democratic and politically accountable governance.

The state laws and contracts that Governor Rauner asked the federal courts to invalidate are settled principles of federal, state, and local labor law. For well over a hundred years, labor unions have sought contract terms that require all employees represented by the union to either join the union or pay their fair share of the costs the union incurs in negotiating and enforcing a labor contract. Administering a fair personnel process is expensive. In a unionized workplace, employees have some say in the process, unlike nonunion employees. But if workers are partly responsible for HR, the union must raise the money to support it. Unions are, in this respect, just like governments. A city or state requires every resident to pay taxes to support schools, parks, police, firefighters, and prisons. Some people deeply oppose policing and prisons, or don’t use schools or parks, but they pay taxes to support them. These are what economists call common goods, and an elementary principle of economics is that no economically rational person will voluntarily choose to pay for them so long as others pay to support them.

From 1947 until Janus, the law has been settled that states can choose whether to allow fair share fees, though it’s ultimately up to each union and agency to decide whether to require them. And the law has been settled since 1977 that unions cannot use fees paid by non-members for political purposes. This was a sensible compromise: everyone must share the cost of the HR process but no one can be required to contribute to political activity.

The Janus majority, in an opinion by Justice Alito, overruled that settled law. The Court held that the payments for representation services are speech protected by the First Amendment because the union uses the money to engage in speech (negotiating a and administering contract). That, by itself, is an astonishing proposition. All of us are compelled by law to pay money to entities that use it to engage in speech activities. Taxes. Homeowners association dues. Health insurance premiums. Pension plan contributions. Licensing fees. Public school and university student fees. The majority in Janus didn’t say anything about these other fees. In Harris v. Quinn (2014), the same five-justice majority held unconstitutional fair share fees for unionized home health aides paid by Medicaid and said they thought that the government has a more compelling interest in requiring attorneys to pay state bar dues and public university students to pay activity fees.  That’s one problem with Janus: the Court gave no reason for prohibiting union fair share fees while allowing other compulsory payments; except, as Justice Kagan said in dissent, “because it wanted to.”

Janus is unprincipled in yet another way: under a 50-year-old Supreme Court precedent public employees have relatively few First Amendment rights. In particular, they have no First Amendment right to speak to their supervisor about their working conditions. In Garcetti v. Ceballos, the Court upheld the discipline of an assistant district attorney who raised concerns with his supervisor about false police testimony that could lead to a wrongful conviction. That speech, the Court held, is not protected by the First Amendment no matter how important the issue, because it was speech about the DA’s work. On matters outside of their job duties and in forums outside the workplace, the Court held in Pickering v. Board of Education (1968) that public employees have a right to speak out as citizens, but only on matters of public concern, and only if their speech does not disrupt the government’s interests as employer.

Janus brushes aside this well-settled law, and its reasoning does not pass the red face test. First, Justice Alito explained, Pickering and Garcetti are a different strand of First Amendment doctrine. That’s silly: there aren’t multiple First Amendments. All of these cases concern public employees’ free speech rights, and the Court needs to explain why employees can get fired for complaining about their work, but not for refusing to pay fair share fees.

Second, Justice Alito explained, Pickering and Garcetti were cases in which employees were prevented from speaking, not compelled to speak. That, too, would earn a very poor grade if a student wrote it: the Supreme Court does not treat compelled speech differently than speech. Take the Court’s original compelled speech case, which struck down discipline of students with a religious objection to reciting the Pledge of Allegiance: would it matter if a student were disciplined for refusing to recite the Pledge, or for reciting it but changing the words to avoid offending the student’s beliefs? Of course not.

Justice Alito’s third way of distinguishing Pickering and Garcetti was the most intellectually bankrupt of all: those cases, he said, concerned the rights of individual employees, whereas fair share fees are blanket policies affecting all workers equally. That is not the law and never has been. And it isn’t even the law that the Court itself applied in two other First Amendment cases this spring. The day before the Court handed down Janus, it held that the First Amendment invalidated a California law requiring women’s health clinics to give accurate information. This involved a blanket policy regulating the speech of all health providers, not individual restrictions. Similarly, in Masterpiece Cake Shop, a bakery argued that a state law prohibiting discrimination in places of public accommodation violated its alleged free speech right to refuse to serve gay couples. The Court did not decide the First Amendment issue, sending the case back to the lower court to reconsider, but the Court never suggested that the First Amendment wouldn’t apply because the law affects all businesses rather than just Masterpiece. First Amendment rights don’t get stronger when it is one person rather than many whose speech is restricted.

The final justification Justice Alito offered in Janus was that some forms of political patronage hiring are unconstitutional and, therefore, union fees should be unconstitutional too. Apart from the false syllogism, the reasoning falls apart because the Court has upheld many laws prohibiting political activity of government employees. It upheld the federal Hatch Act (which prohibits certain partisan political activity on federal government employees’ free time). It upheld state laws that prohibit patronage appointments in low-level jobs. The only restriction on political patronage the Court has declared unconstitutional is a restriction on awarding policymaking jobs based political affiliation. (There might be many reasons why Democrats wish Jeff Sessions were not the Attorney General, but one cannot argue that his early political support for Donald Trump makes it unconstitutional for Trump to choose him.)

Janus is an ideological attack on workplace and political democracy. Unions are democratic institutions in almost every possible way. A union gains the right to represent workers only when a majority vote for representation. Unions govern themselves as democracies, electing their leadership at the local, statewide, and national level. And unions play a crucial role in educating the workers they represent about political issues and getting out the vote. The states that allow fair share fees are primarily blue states. And the unions primarily support Democrats (though they don’t use fair share fees to do it).

The impact of Janus will be significant. Anti-union groups have already hired canvassers to go door to door in blue states encouraging employees to quit their union and quit paying dues by convincing them that they can get the benefits of the union contract without paying for it. Their goal is to get so many teachers, home health aides, and others to leave the unions that the unions lack the money to provide services to all the workers they represent. And as the quality of services falls, more will leave the union, until ultimately the union will wither away. This probably won’t happen in solidly blue states because unions will come up with alternative funding mechanisms – perhaps laws allowing union agents to handle grievances on paid time, as exists in federal employment, or perhaps laws allowing governments to fund unions directly so that the money never comes out of the employees’ paycheck. These would avoid the First Amendment problem the Court perceived in Janus, though they risk making unions less accountable to their members and more dependent on the government. But unions in purple or red states will suffer, and that may increase rather than decrease political polarization by weakening one of the few institutions that counters the conservative right.

We should have no illusions that Janus will be the Supreme Court’s last case attacking public sector unions. The majority’s contempt for public employee bargaining is quite plain: they repeatedly connected state budget woes to unionization. The reality, of course, is otherwise. Some states (like California) have balanced budgets while having powerful unions. Others (as illustrated by the 2018 teacher strikes in West Virginia, Oklahoma, and other states) have dire budget situations even though collective bargaining is illegal.  The same anti-union activists that ginned up Janus have other laws in their sights. They have brought cases arguing that, if paying fees to support bargaining is unconstitutional, it should be unconstitutional for a union to negotiate a contract on behalf of those who do not want union representation at all. Anti-union advocates have lost those cases before, but Janus may change that.

The most pernicious part of the majority’s handiwork in Janus is its idea that the First Amendment empowers the Court to strike down any law regulating speech, regardless of the wishes of the majority. In describing Mark Janus, Justice Alito showed his contempt for workplace and union democracy. Explaining why Janus should be entitled to free ride on the dues paid by his co-workers, Alito said he was not free-riding “on a bus headed for a destination that he wishes to reach but is more like a person shanghaied for an unwanted voyage.” That’s the thing about our democratic republic. Elections have consequences, and we all face them together. Except the five justices casting their eye across America and upholding the laws they like and striking down those they don’t.

Janus was one of fourteen 5-4 decisions this Term in which Anthony Kennedy joined with Justices Roberts, Alito, Thomas and Gorsuch in reaching a conservative result. None of those whose names have been floated as his replacement is likely to be an advocate for a more tolerant or egalitarian interpretation of the constitution. Everyone in the United States who is concerned about the growing divide between rich and poor, everyone who supports women’s reproductive freedom, and everyone who wants more kindness, tolerance, and respect for religious and sexual minorities and immigrants is on an unwanted voyage to a destination they would rather not reach. And the Republican appointees to the Court are the captains of the ship, navigating with only their own personal policy preferences as a guide. That’s not democracy; it’s piracy.