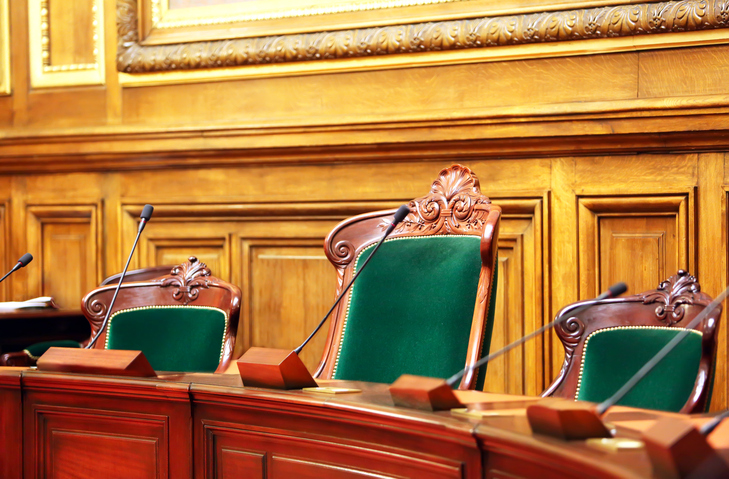 *This piece was originally posted by People For the American Way.

Chuck Grassley wrote this about blue slips in the Des Moines Register in 2015:

For nearly a century, the chairman of the Senate Judiciary Committee has brought nominees up for committee consideration only after both home-state senators have signed and returned what’s known as a “blue slip.” This tradition is designed to encourage outstanding nominees and consensus between the White House and home-state senators. Over the years, Judiciary Committee chairs of both parties have upheld a blue-slip process, including Sen. Patrick Leahy of Vermont, my immediate predecessor in chairing the committee, who steadfastly honored the tradition even as some in his own party called for its demise. I appreciate the value of the blue-slip process and also intend to honor it.

It turns out that only applies to a Democratic president’s nominees. On Thursday, Politico reported that Chuck Grassley is ditching the longstanding Senate blue slip policy and will be holding a hearing for David Stras, even though Stras does not have the support of both of his home state senators. Grassley laid out his justification for this seismic shift in policy in an op-ed in The Hill yesterday. An earlier PFAW post explained how Grassley’s comparison to the 2013 filibuster rules change made no sense. But that’s just one of the many holes in his argument.

Nearly a century ago, Sen. Thomas Hardwick sent a blue sheet of paper to the chairman of the Senate Judiciary Committee claiming that a nominee from his home state of Georgia was “personally offensive and objectionable.” Nonetheless, the committee proceeded on the nomination and reported the nominee to the Senate floor.

Grassley left out a vital piece of information: Respecting the home state senator’s opposition, the committee reported the nomination negatively, and the Senate rejected it without even bothering to hold a recorded vote.

Hmmmm … I wonder why he would omit such an important detail.

That blue sheet of paper was a part of a newly-adopted courtesy to get insights on federal court nominees from home-state senators in an era when such information was hard to come by. This courtesy, commonly known as the blue slip, was intended to serve as an advisory tool – a source of information for senators to consider when casting a vote on the Senate floor.

This newly-adopted courtesy was much more than just an advisory tool. It has ensured that the Senate will not confirm judicial nominees over the objection of either home state senator. It has also been a way to protect the unique nature of the Senate as a collaborative body respecting individual senatorial prerogatives.

According to the Congressional Research Service, the policy was introduced in the 65thCongress of 1917-1918, when Woodrow Wilson was president and his fellow Democrats controlled Congress. That unified control of all the elected branches of the federal government suggests what might be the blue slip’s most important role, whether intended or not: The blue slip was a way for the Senate to protect its institutional interests from the effects of partisan loyalty to the president. In other words, it has served to protect the separation of powers. As we have seen with the Senate GOP’s eagerness to confirm President Trump’s woefully unqualified nominees, such institutional tools are vital. With the Senate rubber-stamping Trump’s judicial picks who will in turn rubber-stamp his actions, the independence of Congress and the courts is threatened. Trump is getting exactly what he wants, and Grassley has now made it even easier for the Senate to serve the president.

For the vast majority of the blue slip’s history, a negative or unreturned blue slip did not stop the Senate Judiciary Committee from holding a hearing and vote on a nominee.

A couple of things here. First, Grassley’s phrasing makes it sound like there were lots of committee hearings in the face of unreturned or negative blue slips. But that was simply not the case. His sentence would be true if there had been a thousand negative or unreturned blue slips that the committee chair ignored. But it would also be true – as is the case – if there were few if any.

Second, Grassley once again left out an important detail: In the policy’s earlier incarnations, negative blue slips meant that the home-state senator wanted to testify at the hearing in opposition to the nominee. Holding a hearing during that earlier era was consistent with the blue slip practice. Also consistent with the blue slip practice is the fact that the Senate did not confirm those nominees.

Perhaps my favorite part of the op-ed is Grassley’s attempt to explain away a 2009 letter from every Republican senator to the newly-elected President Obama. Grassley wrote:

The minority also points to a letter signed by Republican senators at the beginning of the Obama administration explaining that senators expected to be consulted on judicial nominees from their home states. This letter merely supported continuation of the strict blue-slip policy adopted by Chairman Leahy (D-Vt.) during the Bush administration. It would have been unfair to allow President Obama to make judicial nominations without home-state senators’ approval when Chairman Leahy demanded such terms under President Bush.

Grassley seems to undermine his own argument here by admitting that “[i]t would have been unfair to allow President Obama to make judicial nominations without home-state senators’ approval when Chairman Leahy demanded such terms under President Bush.”

Just update the presidents: It would be unfair to allow President Trump to make judicial nominations without home-state senators’ approval when Chairman Grassley demanded such terms under President Obama.

Yes, it would be unfair. Nevertheless, Grassley is scheduling a hearing for Stras.

Why be fair when you have power?