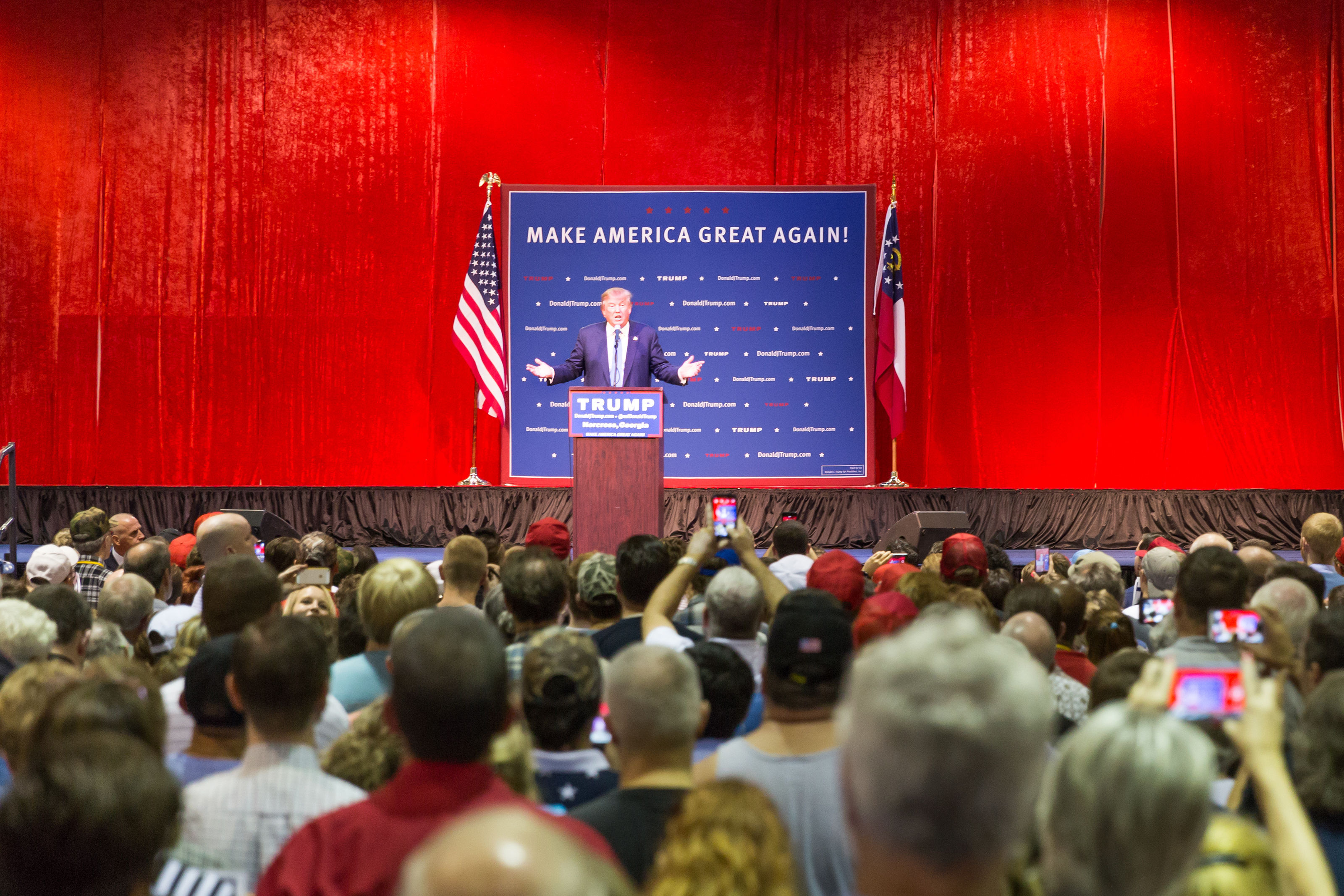 Will America be a democracy in 2050?  For a long time, many political progressives would have answered this question with a qualified and cautious “yes.” True, they worried about our pathological campaign finance system, the paralytic of partisan gerrymandering, and the toxin of voter suppression.

But they didn’t think of these as systemic, potentially catastrophic threats. Since 2016, progressives and many others have been concerned about a different sort of shadow on constitutional democracy. Americans suddenly became aware of a wave of “populist” leaders who seized on a political opportunity presented by economic crisis to discredit established parties on both the Left and Right.

Once in power, the populist adopted the rhetorical posture of speaking for “the People,” implying or openly asserting that opposition was not just disloyal but even treasonous. Necessarily, this populist’s challenge to political elites and claim to speak for the nation brought him—or, in the Argentinian case, her—into conflict with independent institutions such as courts, central banks, election administrators, and prosecutors. At times, this conflict leads to a collapse of free-standing checks on political power. Less constrained, populists begin mismanaging power and seeking ways to entrench themselves by direct attacks on opposition politicians, the media, and academia. In the extreme—as in Turkey—the end result is constitutional change that consolidates the populist’s power. Democratic forms remain, but largely as outer forms lacking substance or the prospect of real change.

In a new book, How to Save a Constitutional Democracy, to be published in October, we explain how this process has unfolded, in whole or part, first in Venezuela and Bolivia—where the assault on democracy came from the Left—to Poland and Hungary—where it was the Right’s turn. Our aim as legal scholars and comparative constitutionalists is to understand the distinctive role of law in democratic backsliding, and to examine the possibility that law can be used in a positive way to deflect the threat that democratic forms will be hollowed out not only around the world but also here at home.

So what does law—and in particular, constitutional law—have to say about the present dynamic of democratic backsliding? And what might we learn from other nations’ experiences?

A first, and centrally important, lesson is that the toolkit of anti-democracy has been rebooted of late: Law and constitutional rules are now instruments of backsliding as often as they are defenses for democracy. Comparing the legal instruments used to hollow out democracy elsewhere and the resources available with U.S. constitutional law, we reason the uncomfortable conclusion that while the U.S. Constitution may be good at checking coups or the anti-democratic deployment of emergency powers—yesterday’s instruments of anti-democratic movement—it is quite poorly suited to stalling the slow decay of democracy. Our 18th century Constitution singularly lacks the provisions necessary to slow down a would-be 20th century autocrat bent on the slow dismantling of democracy.

Consider then the legal tools wielded in other cases and how well regulated they are in the U.S. context.

First, many elected foes of democracy use constitutional amendments to strip away constraints on their power. In the United States, however, the cumbersome process of constitutional amendment makes it difficult for a president who wishes to amass more formal power. But this isn’t an unalloyed good: Because our Constitution is, by comparative standards, quite terse and unrevealing, it contains many dangerous ambiguities. For example, the text does not tell us explicitly whether a president has the power to pardon themselves—a gap that might soon prove vexing.

Second, in Hungary and Poland, democratic backsliding has started with direct attacks upon the

checks and balances flowing from other branches—in particular, national courts. In the United States, those checks exist, but their effect has been profoundly overstated, for interbranch checks on a president bent on consolidating political authority in the United States are remarkably weak.

Critically, they rest on theoretical assumptions that have proved in practice rather fragile. James Madison thought that the divergent “ambitions” of the legislative and executive branches would cause those institutions to balance one another. But he failed to anticipate the rise of a two-party political system at the national level.

The national party system has reshaped incentives. Members of Congress today may have little reason to investigate or otherwise rein in an aggressive president of their own party. That today’s Republicans are not eager to investigate President Trump’s financial dealings, or his contacts with Russia, is entirely predictable, from an institutional standpoint. (The failure to investigate properly the allegations against Judge Kavanaugh can be explained in the same terms, although undermine a different element of the separation of powers).

The U.S. Constitution does not grant rights to minority parties to demand information

Other constitutions give minority parties rights to demand information and make inquiries, but the U.S. Constitution does not. Too many of our election rules depend on the good faith of the party in power. As the omnipresence of gerrymandering shows, good faith may not be enough. After the 2010 redistricting in Wisconsin, the Republican Party was able to win 60 of 99 seats in the state legislature, despite winning less than half of the statewide vote.

Meanwhile, North Carolina Republicans tried a strategy that was straight out of Hugo Chavez’s playbook when their party’s candidate lost the governor’s race. They cut the governor’s staff by 80 percent, eliminated his ability to name trustees of the state university, and required that cabinet appointees be approved by the legislature. They also restructured the elections board so that they would hold the chairmanship during all statewide elections. Although these moves were rejected by the courts, there is no reason to expect that they will not be invoked again in other states, perhaps to greater success.

As the North Carolina example shows, the federal courts are critical in upholding the rule of law and defending democracy. But there is a growing acceptance in American jurisprudence of “deference” to the political branches. That ideology, in combination with aggressively partisan appointments -- Trump is in a position to fill 112 federal judicial vacancies, out of 870 seats — could erode public confidence in judges’ ability to stand up to government over-reach, and thus lead to democratic retrogression. Certainly, after a period of eight or more years with one party in the White House, it is hard to see how the courts could be much of a check on democratic backsliding.

Republicans may reshape how laws are interpreted for decades to come

Moreover, the notional independence of even the Supreme Court is more dependent upon “norms,” than constitutional rules such as tenure protection and salary guarantees. And norms can change. In a less polarized time, the U.S. Senate would have held confirmation hearings for Merrick Garland, President Obama’s last Supreme Court nominee and allowed a more professional FBI inquiry into the allegations against Kavanaugh.

Yet by playing hardball, Republicans may end up reshaping how laws are interpreted for decades to come. One implication is that the nomination and confirmation process are likely to be more politicized, with more partisan candidates being proposed and appointed, and the federal courts becoming correspondingly less legalistic, more disparaging of interests other than those of the dominant coalition, and more heedless of the risk of democratic backsliding.

Other nations, unlike the United States, place judicial appointments beyond political control. Whether such judges are more independent or robust as defenders of democracy is an empirical question, but at a minimum, such systems reduce the ease with which politicians can tinker with personnel.

A third strategy observed in democratic backsliding is the gutting of institutional checks within the branches—such as prosecutors and public-regarding civil servants—that object to egregious forms of self-dealing and entrenchment. These officials are often sheltered, though, by constitutional rules. When this happens, backsliding seems more difficult to pull off.

But in the United States, the civil service is protected largely by tradition and statute, not constitutional rules. That is why the Republican move to lay off federal workers and reduce the benefits of those who remain is so significant, as was a gratuitous revival in 2017 of the Holman rule, which would have allowed the targeted defunding of a particular federal employee or specific program. Similarly, U.S. Attorneys serve “at the pleasure” of the president, and it is largely restraint – not always exercised -- that prevents presidents from punishing them or rewarding them for partisan legal attacks.

In other constitutions, independent ombudsmen’s offices monitor corruption and human rights compliance act as supplements to the judiciary to make up for the latter’s institutional weaknesses. Not so ours. Instead, institutions such as the Office of Government Ethics are staffed by the president, and are ultimately vulnerable to capture or marginalization.

Fourth, what of constitutional rights, which can be invoked as protection against the most blatant forms of anti-democratic behavior? While the First Amendment (currently) limits the misuse of libel law, it does not hedge the risk of partisan media regulation by the FCC or other agencies. Media companies seeking to keep regulators’ favor have now lots of reasons to trim the sails of their political coverage. And the First Amendment, for good or ill, arguably protects sources of outright propaganda – sites spreading lies about politicians, for example — which could in tandem with presidential attacks on the media lead citizens to distrust all news sources.

There is, in short, nothing particularly exceptional about the American Constitution—at least in any positive sense. Because of its age, the Constitution doesn’t reflect the learning from recent generations of constitutional designers. If anything, it is more vulnerable to backsliding than the regimes that failed in Poland, Hungary, Venezuela, Turkey and elsewhere. As a result, whether or not the United States moves away from its best democratic traditions doesn’t rest on the Constitution or on simple fidelity to constitutional rules. Those will quite plainly not be enough.

Nor will it be enough to belabor the technical legal merits or demerits of specific executive actions, or their opponents’ responses.  To do so misses the forest for the trees. In particular, those who insist on formal legality at the expense of considering the motives and immediate effects of an executive action do the republic a great disservice.

Authors’ note: Tom and I will be speaking about the book at a number of venues. We’ve listed them below. We’d love to engage with you, whether or not you agree with our diagnosis—but we hope our analysis sparks conversation and renewed thinking about our Constitution and its limits.

How to Save a Constitutional Democracy—Events