Watchdog: How Protecting Consumers Can Save Our Families, Our Economy, and Our Democracy 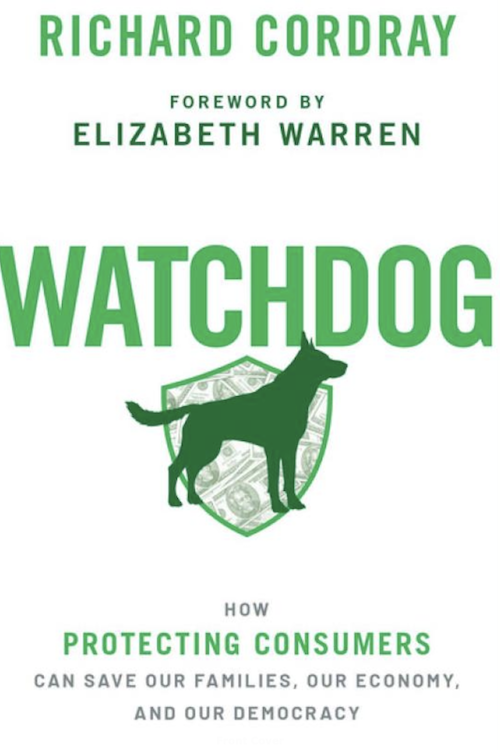 The CFPB was the brainchild of Elizabeth Warren. In an influential article in 2007, she pointed out that though it is now illegal in America to sell people a defective toaster with a 20% chance of bursting into flames and burning down their home, it remained perfectly legal to sell them a defective mortgage with a 20% chance of pushing them into foreclosure and dumping their families out onto the street. She pushed to authorize and build a new consumer agency, dedicated entirely to addressing problems and challenges in the marketplace for household finance. In her book, A Fighting Chance, she told the story of the fight to pass her idea through Congress and of the earliest days of setting up the CFPB before she returned home to run for the Senate from Massachusetts. In Watchdog: How Protecting Consumers Can Save Our Families, Our Economy, and Our Democracy, I pick up the story from there, recounting my experience as the Founding Director of the Consumer Financial Protection Bureau (CFPB).

Watchdog describes a striking feature of modern America: the mass availability and marketing of consumer credit, which has grown in the past two generations from negligible levels to almost $40,000 in consumer debt per person. This has been conjoined with the increasing complexity of everyday financial matters, where any large purchase now requires close attention to the intricate details of financial products that pose hazardous tricks and traps even for the most sophisticated consumers. Every day across America, consumers face issues with credit cards, mortgages, car loans, and student loans. When they are cheated or mistreated, all too often they hit a brick wall against the financial companies. People are fed up with being run over by big corporations, and few have the resources or expertise to fight back on their own.

After growing problems in the increasingly one-sided finance markets created the financial crisis that blew up the economy in 2008, Congress created the CFPB. Sharing the stories of people who were hurt by the crisis – and continue to be hurt by companies that seek to exploit them in the financial marketplace – Watchdog shows how the Bureau quickly became a powerful force for good. It sued big banks for cheating or deceiving consumers, put limits on predatory lenders, simplified mortgage paperwork, and stepped in to help solve problems raised by individual consumers. The book tells a hopeful story of how our system can be reformed by putting government back on the side of the people – to strengthen our families, safeguard the marketplace, and establish a new baseline of fairness in our democratic society.

The book also lays out the dynamics of the political fight to hobble the agency and block it from protecting consumers against large financial companies. The more aggressive the CFPB’s actions to protect consumers, the more resistance it encountered from the financial industry, which has doubled in size just since 1970 and wields tremendous clout in Washington. Financial companies are the biggest source of campaign contributions to federal candidates and parties, spending about $1 billion annually on campaigns and another $500 million on lobbying. Each of the four biggest mega-banks now has over $1 trillion in assets. Financial products have become a mass of fine print that consumers can hardly even read, let alone understand.

Watchdog tells the story of how a dedicated group of people took the bare text of the Dodd-Frank Act, which created the CFPB, and turned it into a tangible reality that matters for consumers. Their work transformed the new agency into a champion for the people that could effectively take on the big banks, level the playing field for consumers, and protect our families and communities against financial abuses. In its first six years, the CFPB put $12 billion back into the pockets of 30 million consumers who had been wronged by violations of the law, handled 1.3 million consumer complaints to fix individual problems, and instituted new reforms to protect the economy by safeguarding the mortgage market.

Watchdog brings issues of consumer finance to life by relating stories of how individuals can be ensnared in problems both big and small, often through no clear fault of their own. It exposes the frustrating economics of life for the 99% of Americans, who often cannot even get answers – let alone any relief – when they have been wronged.

The book also highlights various features of our broken politics in Washington, in recounting the evolution and direction of the CFPB under first the Obama administration and then the Trump administration. Beginning with the political controversies over President Obama’s original appointment of me to head the CFPB, Watchdog traces the ebb and flow of congressional oversight and court challenges to the CFPB, which have culminated in a case testing the constitutionality of its leadership structure now pending before the U.S. Supreme Court.

Watchdog weaves together economic themes, political themes, and legal themes to present a more comprehensive picture of how our government can be made to work for average Americans instead of only the wealthy and the powerful. Many Americans across the political spectrum doubt whether this is even possible right now, and this book addresses those doubts by showing how the fight to get things done in Washington can strengthen America’s middle class.