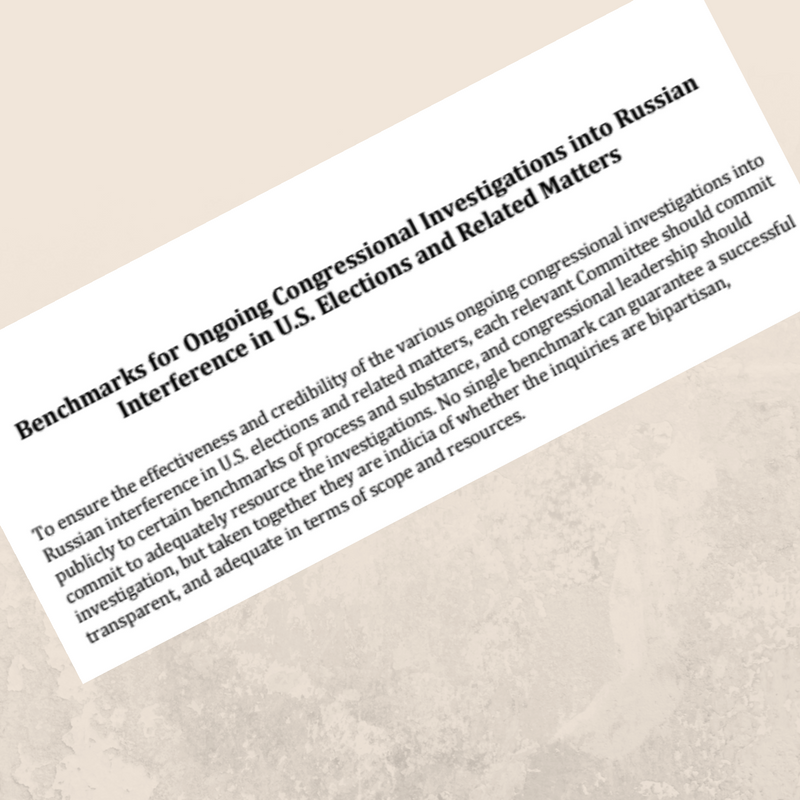 Recently a bipartisan group of congressional oversight experts issued a set of principles titled “Benchmarks for Congressional Investigations into Russian Interference with U.S. Elections and Related Matters.” This initiative is an important tool for evaluating the credibility and rigor of ongoing investigations into alleged election malfeasance.

(1) a publicly defined investigation scope that includes commitment to follow the facts where they lead;

(3) transparency on developments and findings; and

It also outlines specific ways for Congress to demonstrate commitment to these principles, such as by holding hearings in public unless there is a compelling reason for a closed session.

The benchmarks focus on investigations examining foreign manipulation of our elections – an issue with high stakes for Americans across the political spectrum. But regardless of the inquiry’s subject matter, adherence to practices set out in this document will promote effective congressional oversight and reinforce public confidence in investigative findings.

To underline this point, let us take a closer look at the congressional subpoena authority. This is a tremendous power that enables Committees to demand documents and testimony from witnesses – and pursue criminal contempt proceedings against those who don’t comply.

The benchmarks document encourages the exercise of this power with bipartisanship and transparency, recommending that committees issue subpoenas only with agreement of the Chair and Ranking Member or by Committee vote.

Such a practice demands dialogue across party lines and accountability to the public. When issues are so contentious that the chair and ranking member do not agree, they get airing in a committee meeting, allowing the public to better understand the need for and scope of the proposed action.

During the 1990s, however, the House Committee on Oversight veered away from this tradition. When Representative Dan Burton became Chair in 1997, he began unilaterally issuing subpoenas. And more recently, House leadership has revised the rules for other committees to provide unilateral subpoena authority to their chairmen.

The Oversight Committee’s experience with subpoena power highlights the value of building bipartisanship and public scrutiny into the process.

During his six-year tenure at the Committee helm, Chairman Burton issued over 1000 subpoenas with neither minority concurrence nor Committee debate. Of these, 97% targeted Clinton Administration or Democrats.

And when subpoena mistakes occurred, accountability was lacking. For example, the Committee erroneously issued a subpoena to a professor who happened to have the same name as the intended target. When this error was discovered, instead of apologizing, majority staff suggested the professor still might be under investigation, telling the media that “Whether [he] deserves a subpoena or not, we haven’t decided. We’ve put it on hold. If you make a mistake, and we’re not sure we made one, you want to look into it.”

While the Oversight Committee’s written rules have retained unilateral subpoena authority since the Burton years, some of the Chairs who succeeded Burton nonetheless adopted bipartisan practices. For example, in 2006, Chairman Tom Davis issued a subpoena in a joint inquiry with Ranking Member Henry Waxman on Administration contacts with lobbyist Jack Abramoff. And when Waxman was Chairman he obtained Davis’s support or Committee vote for every subpoena he issued.

As then-chief counsel to Chairman Waxman, I saw firsthand that following traditional subpoena practices did not prevent rigorous oversight. During Waxman’s tenure, Ranking Member Davis requested a Committee vote on only a handful of proposed subpoenas, such as a demand to the Republican National Committee for information on alleged Administration use of RNC email for official business. Even then, the Chair was able to issue subpoenas after Committee debate and approval – and the public had a role in vetting the most contentious subpoenas.

With rules changes in recent years, many House committee chairs -- including those with jurisdiction over alleged election interference – have authority to issue unilateral subpoenas. However, like Chairman Waxman, they can choose to involve bipartisan and public review. Close public attention to the choices committees make on “benchmark” practices will encourage credible outcomes as investigations unfold.